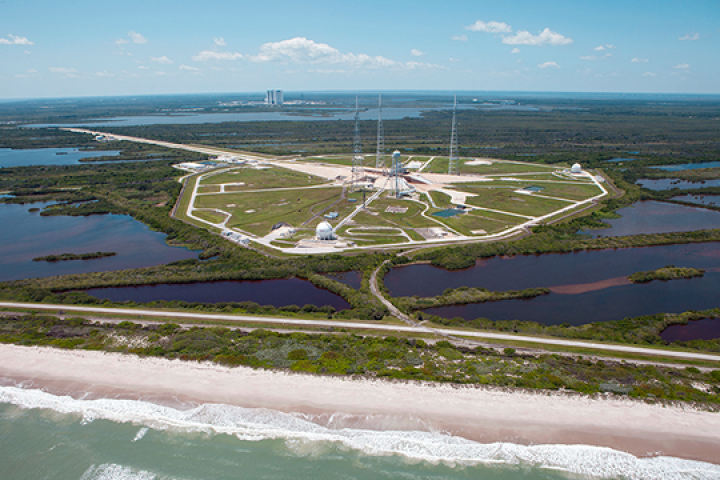 Created to propel humankind beyond the limits of Earth, Kennedy Space Center is now facing a terrestrial threat — the warming of our home planet, leading to sea level rise, erosion and catastrophic flooding — that could hinder our push to deep space.

To protect the nation’s most historic launch pads and the only place in the United States capable of launching humans to orbit, NASA is building a massive dune along the coast but experts say that isn’t enough, leaving some to consider the unthinkable:

What if Kennedy Space Center had to move to higher ground?

“It’s almost the same type of thing as saying ‘We’re going to move the White House two blocks to the left.’ You wouldn’t, right? Because you’ve invested in the infrastructure. It’s the hand we’ve been dealt since the ‘60s when the pads were first built,” NASA’s Public Affairs Officer Gregory Harland said.

The founding fathers of America’s space program chose a barrier island to launch rockets into space for safety reasons. Haywire rockets could explode over the ocean protecting people on land. But the very quality that makes this location perfect for launches threatens to destroy it.

By conservative estimates, NASA projects Kennedy Space Center will experience 5 to 8 inches of sea level rise by the 2050s. But if pollution continues to warm the planet causing polar ice to melt more rapidly, then NASA predicts 17 to 24 inches by the 2050s.

What that means is that launch sites at Kennedy Space Center and Cape Canaveral Air Force Station could find themselves at major risk from coastal flooding, according to a new analysis by scientists with the non-profit Climate Central.

Launch Complex 39A, the historic Apollo 11 pad that SpaceX now leases for its Falcon Heavy rocket, is the most vulnerable. The base of the pad sits only a few feet above seal level and about a quarter mile from the coast. That’s about as close as Ron Jon Surf Shop,the famous Cocoa Beach store, is to the beach.

Complex 39A is estimated to face a 14% annual risk of flooding next year and it’s projected to flood at least once a year on average during the 2060s unless additional measures are taken to protect it according to Climate Central's analysis. By 2100, parts of the launch site could experience near monthly flooding.

The predictions are nearly as alarming for Launch Complex 39B, the future home of NASA’s SLS rocket being built to launch the first woman and next man to the Moon by 2024.  Starting next year, it’s projected to experience a 6% annual risk of flooding. That risk more than doubles in 2040, with annual flooding projected by 2070,according to Climate Central's analysis.

It is unclear how much damage such floods could cause to the launch pads, but at the minimum rising water could leave the complexes as tiny inaccessible islands and threaten the roadways and other infrastructure needed to support them.

In addition, the natural coastal barriers are eroding. Based on historical records and aerial photos, the beach in front of KSC has thinned and moved inland by as much as 200 feet. The losses have been most severe along the stretch near pads 39A and B.

“We live on the Space Coast. It’s something almost cultural that we have the space industry here and it’s tremendously valuable to our community and we need to do everything we can to protect it.” Leesa Souto, Executive Director of the Marine Resources Council and Assistant Professor of Ocean Engineering at Florida Tech, said.

That's why comments about moving KSC are so alarming. Experts inside and outside the agency are focused on how to protect not only the billion dollars of investment but the historic legacy of the pads.

NASA Biologist Don Dankert is charged with protecting some of those incredibly valuable assets. He is the technical lead for the Kennedy Space Center environmental planning office.

“Climate change is obviously important to the agency,” Dankert said, “looking into the future, how we address climate change, with our infrastructure in our inland areas, is a top priority,”

After studying several engineering solutions, Dankert and his team settled on constructing hefty inland sand dunes as a barrier between the encroaching ocean and the launch pads.

NASA is building a 3.2 mile long dune that is 17 feet high and 90 feet wide with 350,000 cubic yards of sand. The sand is being trucked in from an inland source and is matched to the sand that is on local beaches for grain texture and size consistency.

The dune will then be covered with native vegetation creating a habitat for a number of endangered species including sea turtles, the Southeastern beach mouse, gopher tortoise and indigo snakes.

But with forecasters warning of more frequent and stronger hurricanes as temperatures continue to climb, one climate scientist says the dune idea is a band-aid.

Joseph Donoghue, an ocean sciences professor at the University of Central Florida, is assessing the effects of major storms on coastal environments at the National Center of Integrated Coastal Research.

“Sure, dunes are a good short-term solution. But the dunes are only good for as long as no major hurricanes come through,” he said. “Long-term, dunes aren’t going to do the job.”

But NASA stands by the dunes.

“That dune performed exceptionally well. I think it truly exceeded our expectations. It was a much smaller dune system than this,” Dankert said. That dune proved itself during Hurricanes Matthew and Irma.

“You do see some scarping and erosion along the dune, but that's what these things are designed to do,” Dankert said.

NASA considered the dune so successful, it is putting $35 million toward the current shoreline restoration project to build a much larger and more robust dune that is built on top of the ‘Sandy dune.’ The project is on track to be completed by the end of 2020.

“They almost always lead to a depletion of sand resources for the beach ... however, seawalls last longer,” he said. “If the primary goal is to stabilize the shoreline — to protect structures, roads, etc — then seawalls are preferred.”

But according to Souto, sand dunes and sea walls only protect against storm surge and do not address flooding from the rising groundwater.

It's not just flooding from the ocean that experts are concerned about; a rising sea level also increases pressure inland, causing the groundwater to rise.

The launch pads are particularly vulnerable because they “are out on a peninsula in the middle of the ocean between the estuary and the ocean,” explained Souto.

“So unless they’re going to build the launch pads on the top of the 17 foot dune,” Souto said, “they are going to be underwater.”

One company isn’t taking any chances. Blue Origin is pumping $1 billion dollars into the Space Coast to build and launch its New Shepard rocket. The Jeff Bezos-led company leases Launch Complex 36 and is currently building it out and up — way up.

“The base of the rocket will be 50 feet above the ground which is 20 feet above the 100 year flood plain,” said Scott Henderson, Blue Origin's vice president of test and flight operations.

Preparing for the Unknown

One of the biggest obstacles the space industry faces is the same mantra NASA has relied on for decades: we don't know what we don't know. Only this time, they're referring to what future climate change will bring.

NASA will continue to monitor the shoreline indefinitely and address any issues as they move forward. Dankert is hopeful the dunes will hold up but knows there are no guarantees.

The military satellites launched from these very pads may one day be able to provide those answers. But for now, the Air Force’s 45th Space Wing which oversees the launch pads at the Cape Canaveral Air Force Station is faced with the same challenge as NASA.

Space Launch Complexes 40 and 41 are also at substantial risk from future flooding, according to Climate Central's analysis.

Pad 41 could be the site of the first commercial rocket launch of American astronauts to the International Space Station.

In a heated race against SpaceX, Boeing is building its Starliner capsule to fly aboard United Launch Alliance’s Atlas V rocket to support NASA’s commercial crew program. If all goes well, the plan is to launch in the first quarter of 2020.

That same year, both pads 40 and 41 are estimated to experience at least a 1% annual risk of flooding. Climate Central's study says that annual risk increases to at least 10% for Complex 40 in 2040 and for Complex 41 in 2070.  By 2100, both launch complexes are expected to flood at least once a year on average.

United Launch Alliance leases space complexes 41 and 37 from the Air Force. While ULA complies with government codes and hurricane requirements when they are making modifications, they are not currently addressing climate change related impacts.

The Air Force is not actively constructing barriers at this time, but Michael Blaylock, chief of the 45th Space Wing Environmental Conservation, said, “We are closely monitoring the operational sites.”

It’s not just launch pads that could be underwater in the future.

Landing Zones 1 and 2, where SpaceX boosters return to the Cape to be used again, is also at risk.

“It’s interesting that one of the most vulnerable spots of erosion is right where SpaceX lands their boosters,” Donaghue said. He says the area is an ”erosional hotspot,” based on the long-term movement of Cape Canaveral’s shoreline. United States Geological Survey data shows the portion of the coast is retreating at an average of six feet per year.

“With the exception of the areas near some of the inlets, that is the fastest-eroding shoreline on Florida’s East Coast,” Donaghue said.

Overcoming extraordinary challenges is nothing new for the space industry. Dale Ketcham, VP at Space Florida, believes that future technology developments in space will be the key to reducing climate change impacts on Earth.

“Look at Bezos wanting to move mining and energy production off of the planet and into the solar system,” Ketcham said. “That will be a huge step forward for restoring this planet to its natural state prior to human destructive activity.”

Until that technology is developed, Ketcham thinks the very people engineering our future in outer space will be part of the solution here on Earth.

“The space industry has demonstrated particularly with the private sector stepping up in a huge way, a resilience and innovative ability to improvise,” he said, “I’m confident that we’ll not only be part of the solution but able to adapt to the challenge as we come up with those solutions.”

But the question remains: will Kennedy Space Center remain viable well into the future? The Space Coast economy is certainly banking on its success. The Economic Development Commission estimates that the aerospace industry is worth $3 billion dollars annually to Brevard County.

Ultimately, the Cape may prove to be a jumping off point. Blue Origin's Henderson said he envisions a time when there will be thousands of space ports.

“Today we’re constrained to coastal areas but in the long haul you need to get reliable enough to fly from lots of places,” Henderson said.