This research brief by Climate Central is part of Breathing Fire, an ongoing series of research briefs and journalism projects dealing with wildfires and their causes, impacts, and solutions.

Prescribed burns — an important tool for reducing wildfire risk — are being unevenly applied across the country.

As rising temperatures fuel bigger and more deadly wildfires, new research shows that prescribed burns — an important tool for reducing wildfire risk — are being unevenly applied across the country. Federal agencies are lagging in their use of prescribed burns to reduce fuel for wildfires, particularly in the West, where recent wildfires have caused dozens of deaths and billions of dollars in damage.

By deliberately igniting and controlling fires, land managers can limit the danger of devastating blazes. These prescribed burns use up some of the fuel available for uncontrolled wildfires, offering one way to reduce risk. Prescribed burns can also restore balance to ecological processes disrupted by long periods of fire suppression.

The area covered by prescribed burns has increased in the Southeastern United States but has remained largely flat in the rest of the country, according to a paper published May 29 in the peer-reviewed journal Fire by the University of Idaho’s Crystal Kolden. Data gathered by Climate Central show that the proportion of funds that federal agencies allocated toward prescribed burns compared to suppression decreased between 2013 and 2018.

This report summarizes Kolden’s findings and provides additional data and context from Climate Central, shedding light on state-by-state fire patterns and on government spending on fire suppression and prescribed burns across the country. As temperatures rise from the increase in heat-trapping gases in the atmosphere, raising wildfire risks, prescribed burns provide a tool for reducing the danger.

Prescribed burns are widely recognized as one way to remove extra fuel that builds up in ecosystems — particularly where natural rates of wildfire have been intentionally suppressed in recent decades — and therefore to reduce the risk that high-intensity, uncontrollable fires will spread once they do ignite. But Kolden’s paper shows that the practice has been used unevenly across the United States.

There are a few caveats. Climate and land cover vary across states and regions, and higher or lower rates of prescribed burns do not necessarily equal “better” or “worse” land management. Researchers and journalists examining this topic in their state or region should consider these contextual factors, as well as recent and historical rates of uncontrolled fire and prescribed burns. What’s more, the National Interagency Fire Center, a source of data in this report, makes a best effort at collecting comprehensive data, but agencies are not required to submit such data to the Center, and so state-level and regional data may undercount fires. Journalists reporting on a state’s prescribed burning and fire suppression practices can request data from local agencies responsible for managing land and fire for the most up-to-date figures. 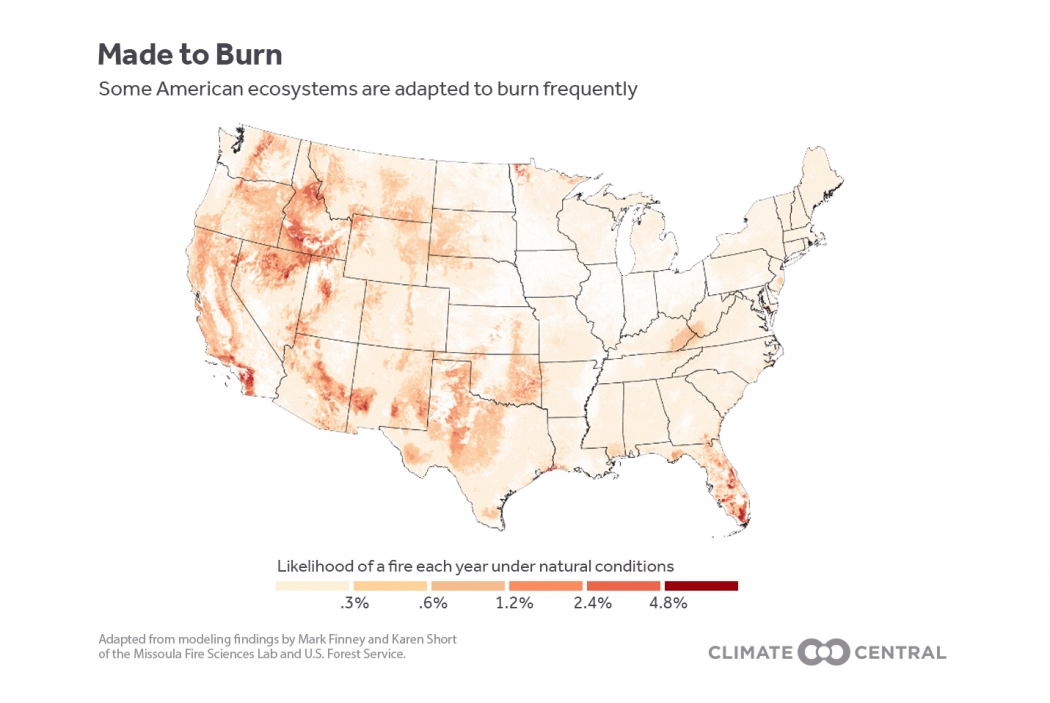 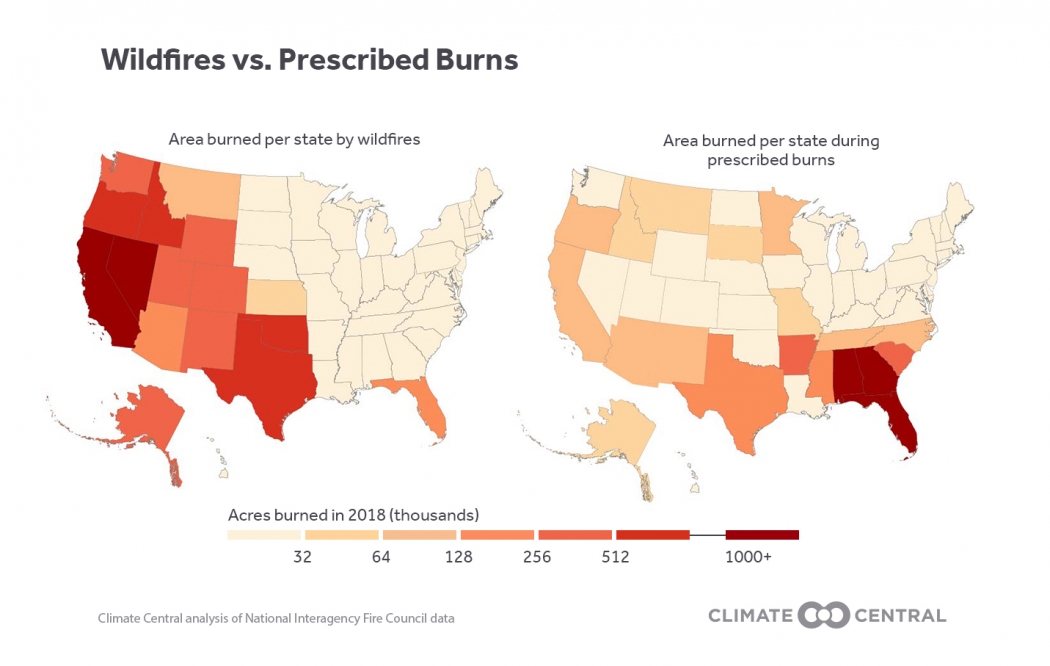 The Western half of the United States is home to most of the country’s large wildfires. Much of the region gets the bulk of its moisture in the fall and winter, and during the summer, its forest biomass and soils tend to be drier than those of the Eastern United States. As climate change boosts temperatures in the West, those hot, dry conditions are getting hotter and drier still. And Western snowpack — a key source of moisture during warmer months — is both accumulating more slowly and is melting earlier than in the past, leaving forests drier for longer periods and further boosting fire risk.

In the West, meanwhile, the public is more averse to the risks of prescribed burns. In addition, in the mountainous areas found throughout the West, where the weather can change quickly, land managers can struggle to find suitable days for prescribed burns, or “burn windows,” which require the alignment of particular levels of humidity, soil moisture, and wind, among other factors. Prescribed burns in mountainous areas can be challenging because fires can move more quickly uphill. Western terrain and atmospheric conditions can also make it easier for smoke from prescribed burns to remain trapped in an area for days at a time. Then there is the matter of restrictions on prescribed burns imposed by states, which are generally tighter in the West than in the Southeast.

What’s more, federal fire management programs, which are more common in the West than in the Southeast, face incentives to spend time and money on suppressing fires rather than on igniting prescribed burns. The proportion of federal money available for prescribed burns compared to wildfire suppression has declined over the past five years, Climate Central has found. Today, federal agencies allocate more money to fire suppression than to prescribed burns. (For a breakdown of spending by federal agency from 2013 to 2018, based on data gathered by Climate Central, see “resources and downloads.”) 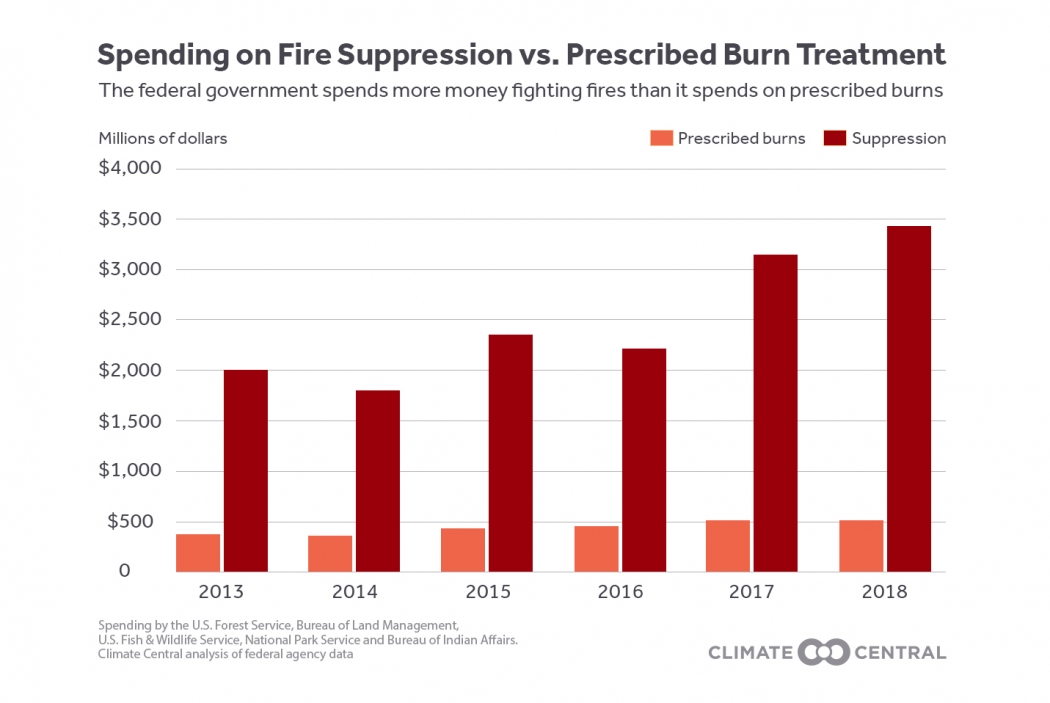 As the climate warms, the balance that land managers strike between fire suppression and prescribed burns will help shape the wildfire risks faced by communities across the country.

Resources and downloads
Kolden’s peer-reviewed paper in the journal Fire, “We’re not doing enough prescribed fire in the western US to mitigate wildfire risk”
Download this report as a PDF
Data showing:

“Made to Burn” map: Climate Central adapted the map from modeling findings by Mark Finney and Karen Short of the Missoula Fire Sciences Lab and U.S. Forest Service. Their findings are detailed in this study.

“Wildfires vs. Prescribed Burns” map: The National Interagency Fire Center (NIFC) collected data from each federal and state agency that manages land between 2002 and 2017. (In 2018, NIFC did not publish the data per agency and state, but rather solely published by state.) Climate Central used Tabula to extract the data collected by NIFC, which is housed in PDFs on the final pages of the “NICC Wildland Fire Annual Reports.” These reports are available here. Climate Central then manually cleaned the data. The data is likely undercounted across the nation; states began reporting to the data to NIFC more comprehensively beginning in 2015.

“Spending on Fire Suppression vs. Prescribed Burn Treatment” chart: Information officers from the Bureau of Land Management, the U.S. Fish & Wildlife Service, the Bureau of Indian Affairs, the National Parks Service, and the U.S. Forest Service provided Climate Central with information about their funding commitments to prescribed burning and wildfire suppression between 2013 and 2018. Caveats related to U.S. Fish & Wildlife Service (USFWS) spending, per an agency spokesperson: “The numbers … only reflect the USFWS wildland fire management budget, which is allocated through the Department of Interior Office of Wildland Fire [OWF] for purposes of wildfire response and fuels treatment on USFWS managed land. The other DOI agencies that manage wildland fire (NPS, BLM, and BIA) have separate allocations through OWF for the same designated purposes. However, because USFWS is the only federal agency with a sole mission related related to wildlife, and prescribed burns are very beneficial to most wildlife habitat, USFWS actually spends more funds to conduct (non-fuels treatment) prescribed burns than what is represented by these fire budget numbers … on the national level from our fire office, we have not been tracking this additional USFWS funding spent for ‘habitat burning,’ except for very recently and not by region.”