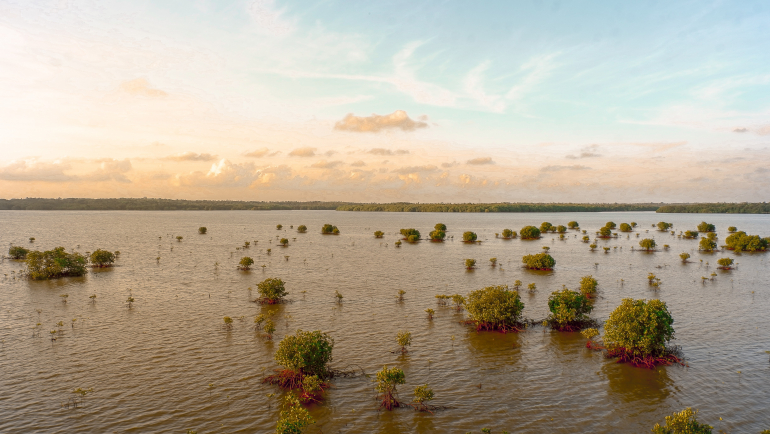 A  ffordable housing serves as a lifeline for millions of individuals and families in the United States. Stable, secure housing is known to support better health outcomes, economic mobility, and employability. But there is a severe shortage of homes that are affordable or available to low-income renters. Scientists at Climate Central analyzed the risk coastal ﬂooding poses to affordable housing—both subsidized and naturally occurring—as sea levels rise. They found that more than 7,600 apartments, townhomes, and houses nationwide are currently exposed to at least one “coastal flood risk event” in a typical year, and more than 24,500 units may be so threatened by 2050.

Climate change is increasingly afflicting the most vulnerable communities

The frequency of coastal floods has risen sharply in recent decades due to a warming planet. Rising seas will continue to aggravate both tidal flooding (also called nuisance or chronic flooding) and flooding from extreme weather events in the years ahead. By 2050, with unchecked carbon emissions, the 100-year flood level (or the flood level with a 1% annual  chance of occuring, defining the floodplain), could occur about at least 40 times more often at half of U.S. locations studied. Tidal flooding that now occurs once a year may occur on a weekly basis in some coastal communities.

Of particular concern is the exposure of housing that is considered affordable to low-income households: housing that is federally subsidized or “naturally occurring,” meaning it is unsubsidized but rents below local market rates or for less than 30% of local median household incomes. This housing is an exceedingly scarce resource across the country. Nationwide, there are only an estimated 35 affordable rental units available for every 100 extremely low-income renters—a national shortfall of over 7 million units. These homes are also particularly vulnerable to flooding, as affordable housing tends to be older and is rarely equipped with resilience-enhancing features (such as flood proofing, oﬀ-grid energy, or backwater valves), due to the cost of such measures. Additionally, residents of affordable housing often lack the financial resources to repair, rebuild, or retreat from their housing after it is damaged by flood waters.

Flood-damaged affordable housing can have long-term consequences for residents, owners, and communities, including increased homelessness, loss of rental income that can make it difficult for housing owners to provide affordable housing, and neighborhood-level economic downturns.

Scientists at Climate Central aimed to quantify the current and future coastal flood risk to the nation’s affordable housing inventory so that local, state, and federal stakeholders could understand the overall exposure of this already scarce resource. By focusing on the year 2050, the analysis reveals the threats that could affect residents and allows stakeholders an opportunity to plan for resiliency.

This study advances upon prior methods for characterizing the impacts of coastal flooding and sea level rise in a number of ways. Using high-resolution data, it uses individual building footprints and assesses threats that integrate across a wide range of potential sea level rise amounts and flood severities on top of them, instead of choosing a small number of scenarios (more detail available in original study).

Findings: Thousands of units are at risk now, and that number will multiply over the next three decades

Using the year 2000 as a baseline for comparison with future risks, the analysis shows that 7,668 affordable housing units were recently exposed to at least annual flood risk in the United States. New Jersey has the highest number of units and percentage of its affordable housing stock exposed, followed by New York and Massachusetts. Many fewer units are at risk in California, but these units face a high risk of repetitive flooding, similar to affordable housing in Maine, Maryland, Alabama, and Texas.

By 2050, under a continued high-carbon emissions scenario, the risk increases significantly, with the aggregate number of affordable housing units exposed annually more than tripling to 24,519 units. New Jersey could see nearly 7,000 units exposed, a four-fold increase; and New York and Massachusetts would continue to rank among the top three states for absolute and relative number of units exposed. Pennsylvania (792%), Florida (774%), and South Carolina (669%) face the largest percentage increase over the 2000 baseline in units exposed.

The researchers also ranked the top 20 cities in terms of annual numbers of units exposed by 2050. These 20 cities account for three-quarters of all the affordable housing units at risk of coastal flooding across the United States, showing that coastal flood risk is highly concentrated. Cities in the Northeast and California are the most vulnerable, with New York City remaining the most exposed, with over 4,000 units at risk per year by 2050. Five cities in New Jersey ranked in the top 20, four of which (Atlantic City, Camden, Penns Grove, and Salem) are among the poorest urban areas in the country, with an average median household income of just $28,618 (in 2018 dollars). In a number of cities, more than half of the affordable housing stock is at risk in 2050, including Foster City, Calif. (100%), Crisfield, Md. (92%), Hoquiam, Wash. (72%), and Atlantic City (52%).

*Exposure may be overstated in Foster City, CA where new levees may not have been included in a national levee inventory used in the analysis. See paper for details.

“A rising tide lifts all boats” is a phrase often used to articulate the idea that a prosperous economy will benefit all its participants. But the rising tides driven by global warming are increasing flood threats for thousands of residents in low-income communities and neighborhoods. Flooding can wreak havoc on buildings and the residents who live in them, threatening public health and causing profound disruption to families struggling to make ends meet. Chronic or “nuisance” flooding can also damage cars and keep residents from getting to work, school, or medical care.

Understanding current and future exposure of affordable housing to flood-risk events, including the number of units that could be affected and how often, can support strategic resilience planning. In the cities and states with the greatest threats, flood-threat reduction measures, such as building retrofits or flood-proofing, and land-use regulatory policies are tools for stakeholders to protect affordable housing stock, and the lives and livelihoods of those who live there.

A coastal flood-risk event at a building is defined as a day when local coastal water levels rise higher than the lowest point of the building’s ground elevation. Different combinations of tides, storm surges, and sea level rise drive these water levels. An event is counted only when a building is hydrologically connected to the coast at the water level achieved; in other words, barriers such as ridges or levees are not known to protect the building at that level .

Whether a flood actually occurs also depends on other factors as well, including how much higher the water gets, how long it stays high, how close the building is to the coast, how rough the terrain is, and meteorological details such as wind strength and direction and amount of rainfall, if any, and how far inland floodwaters reach during a particular high tide or storm.

Estimated Annual Exposure denotes the average number of affordable housing units in a given area exposed to coastal flooding in a typical year. This provides counts of the number of units that could potentially flood based on water and land elevations, not predictions of how many units will actually flood, which also depends on the same factors that distinguish actual floods from flood-risk events.

Each affordable housing building’s footprint was assessed for the annual probability of experiencing at least one coastal flood risk event in a given year. Sea level rise projections were based on Kopp et al. 2014, and coastal flood risk statistics were based on Tebaldi et al. 2012 . These building-level probabilities were integrated to estimate the total expected annual exposure at zip code, city, county, and state levels. For more detail, see the paper online. To explore affordable housing vulnerability given a range of sea level rise projections and storm surge events, see the online tool.

Climate Central is an independent organization of leading scientists and journalists researching and reporting the facts about our changing climate and its impact on the public. Climate Central’s Program on Sea Level Rise provides accurate, clear, and granular information about sea level rise and coastal flood hazards both locally and globally, today and tomorrow. We offer user-friendly maps and tools, datasets, and high-quality visual presentations.