A week of wild and unusual weather brought a combination of record cold, snow flurries, heavy rains and 90-degree heat to different parts of the U.S. As a result of this weather pattern, which was characterized by a topsy turvy jet stream that caused storm systems to slowly inch across the country, drought shrank in some places and grew in others, but the changes followed the same pattern that has held for the past several weeks.

According to the latest U.S. Drought Monitor, released Thursday, Florida saw the most drought improvement during the past week, while New Mexico saw the biggest deterioration. Modest to heavy rains fell all across the Southeast last week, and continued to eliminate patches of abnormal dryness that have lingered from the drought that afflicted the region for more than two years. In Georgia, drought came to a sudden end, as heavy rains erased a two-year drought in just two months. 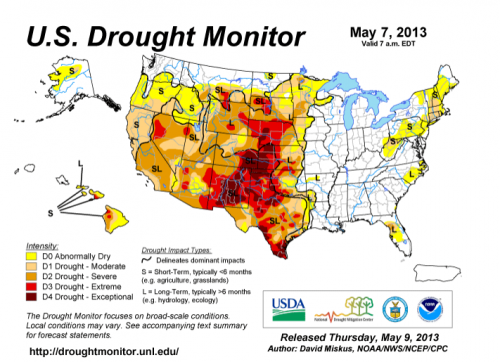 Florida is now the only state in the Southeast with areas of moderate and severe drought, and both of those areas shrank significantly during the past week, where storms set rainfall records all across the state. South Florida set a record for the wettest 7-day period during this time of year, and Jacksonville saw more than 10 inches of rain during the past week.

The drought situation in the Southwest and West is a very different story. The region saw a few scattered showers during the past week, but they did little to combat the above average temperatures and months — and in some cases years — of below average precipitation that are creating a crisis in many Western states. This week, drought expanded slightly across California, Oregon, Nevada and Montana, but the worst impacts were being felt in the Southwest. In California, the drought contributed to early-season wildfires near Los Angeles, possibly heralding a severe wildfire season ahead.

In New Mexico, the past 30 months have been the driest on record. Much of the state has seen half of its average precipitation during the past six months, which has already impacted the state’s rivers and reservoirs, and is placing a severe strain on the many farmers and ranchers who rely on those sources of water throughout the year.

The total percentage of the lower 48 states under moderate drought or worse now stands at 48.06 percent, compared to 46.9 percent last week. The area of exceptional drought, the worst category, expanded to 4.38 percent this week, from 3.40 percent one week ago.

Prolonged drought in some areas is creating anxiety about the 2013 growing season. “We are starting out 2013 in by far the worst shape on record, with respect to U.S. pasture and rangeland conditions,” said Brad Rippey, a Department of Agriculture meteorologist, in a press release. “This is on the strength of continuing drought from California to the Great Plains. This part of the country accounts for a disproportionately large percentage of the nation’s rangeland.”

The heat and dryness across the Southwest this week contrasted sharply with the late-season snow, cold snap, and flooding that hit the Midwest. A storm system that hovered over the center of the country for several days brought cold temperatures and a blanket of snow to parts of Missouri, Iowa, Minnesota, Wisconsin, and as far south as Arkansas, shattering snowfall records in these states.

“The combination of wet and cool weather this year has definitely dented or eliminated the drought in much of the Midwest, and if these conditions continue, additional improvement is likely,” said David Miskus, lead author of this week’s Drought Monitor, in a statement accompanying the update. 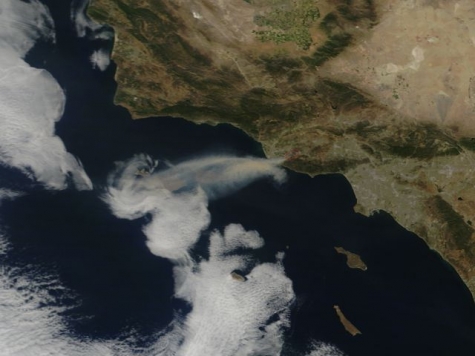 Smoke blows out to sea from the Springs Fire in California, on May 2.
Click on the image to enlarge. Credit: NASA.

The biggest swings in weather this week affected the High Plains. “This week’s precipitation was a miss, hit, and miss in the northern, central and southern Plains, respectively,” said Miskus. Some single-category improvements were made in the eastern fringes of Kansas, and enough rain fell over northern Colorado and southeastern Wyoming to create six-month precipitation surpluses. However, much of that region still remains in “severe” drought or worse, thanks to the long-term drought that began last year. Overall, few changes were made to the drought areas in the Dakotas and northern Nebraska.

Although heavy rain fell in parts of the Northeast and Mid-Atlantic states this week, most of it fell after the Drought Monitor’s Tuesday cutoff, so the effects of that rain won’t be taken into account until next week. In the meantime, parts of the Northeast from West Virginia to Maine have been abnormally dry for the past several week. Parts of southern New England are suffering from 30-day and 60-day precipitation deficits, and patches of “moderate drought” developed in those regions last week. Fortunately, this is the time of year when streamflows can recover most quickly from a few soaking rains, so the effects of this long-term dryness may be eliminated with a few more storms in the coming weeks.

The latest Seasonal Drought Outlook, released on May 2, calls for the drought to continue to intensify in the West and Southwest, and improve in Florida and the Midwest.

Related Coverage
Scientists Raise Questions on Drought and Climate
Global Warming Not Significant in 2012 Drought: Report
Another Summer of Drought Looms for Texas and West
Ongoing Coverage of Drought in the U.S.