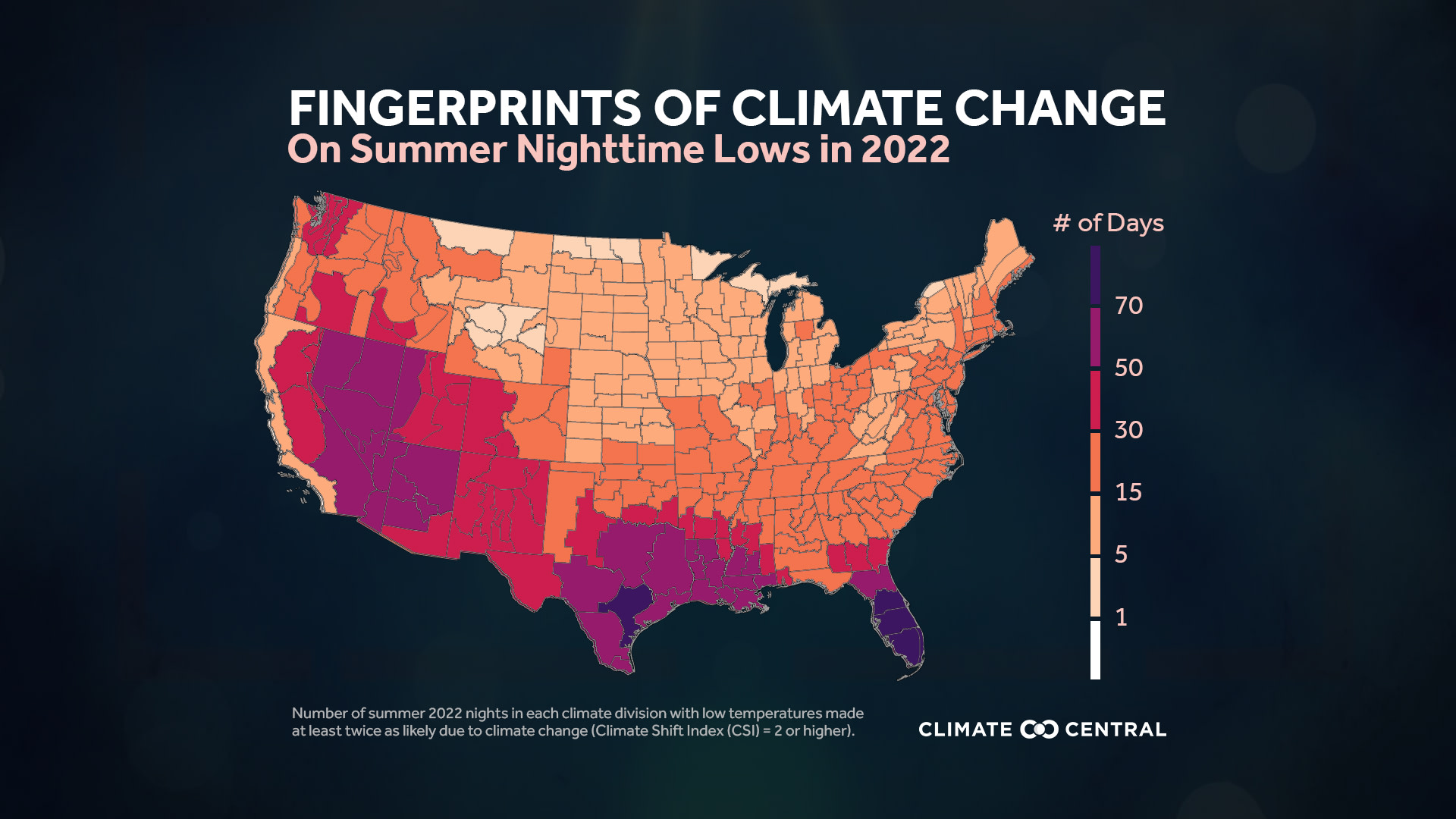 Summer temperatures were much above average for most of the Lower 48 states. In 2022, Texas, Massachusetts and Rhode Island all experienced their second-warmest summers since 1895. And seven other states experienced one of their top five warmest summers since 1895: New Hampshire, Connecticut, New Jersey, Louisiana, California, Oregon, and Washington.

Climate Central ranked summer average temperatures in 239 U.S. locations, each having a different starting year (ranging from 1863 to 1981) for their period of record (see methodology). Based on this analysis:

Was it climate change?

Since records began in 1895, summer minimum (nighttime) temperatures across the U.S. have warmed at a rate of +1.6°F per century—nearly twice as fast as the warming rate for summer maximum (daytime) temperatures.

In 2022, the contiguous U.S. experienced its second-warmest summer minimum (nighttime) temperatures on record (since 1895). 66% of the contiguous U.S. (by area) was affected by extremely warm summer nights, compared to 27% exposed to extremely warm days. And August nighttime temperatures were the warmest on record (since 1895) for California, Oregon, Washington, Nevada and Idaho.

So how did climate change influence the sweltering summer nights we experienced in 2022?

Summer 2022 extremes weren’t only about the heat. What were some other notable U.S. events?

Wildfire: Warm, dry, windy conditions make fires more likely (see Climate Central’s Wildfire Toolkit). In 2022, wildfires were active in parts of the South and Southwest, in Alaska through June and July, and across the West and southern Plains. As of September 15, over 50,600 wildfires have burned more than 6.7 million acres this year (above the 10-year average), impacting ecosystems, property, and air quality. InciWeb’s national maps can be used to monitor current fire incidents.

Drought: Rising global temperatures are altering the water cycle and increasing the risk of drought in parts of the U.S. (see Climate Central’s Drought Toolkit). A recent study indicates that the ongoing southwestern megadrought (since 2000) is the most severe of the past 1,200 years. As of August 30, 45.5% of the contiguous U.S. was in drought—a decrease from the summer peak of 51.9% on July 26. In August, severe to exceptional drought was widespread from the Great Basin to the Pacific Coast, across portions of the central and southern Plains, and in parts of New England. By August 30, a record 94% of the state of Hawaii was affected by drought. And in July, Puerto Rico experienced a record 85 consecutive weeks of drought.

Hurricanes: Warming oceans are fueling stronger tropical cyclones (see Climate Central’s Tropical Cyclones Toolkit). Despite predictions for an above-average Atlantic hurricane season due to the ongoing La Niña, there were only three named storms during the summer. However, fall is often the most active season for tropical storms and hurricanes, and Hurricane Fiona brought heavy rainfall, high winds, catastrophic flooding, and widespread blackouts across Puerto Rico before making a second landfall in the Dominican Republic on September 19.

The SciLine service, 500 Women Scientists or the press offices of local universities may be able to connect you with local scientists who have expertise on summer extremes and climate change. The American Association of State Climatologists is a professional scientific organization composed of all state climatologists.

To calculate average CSI data, the non-rounded version of CSI (called the Climate Factor, or CF) associated with minimum and maximum daily temperatures was collected using Climate Central’s Climate Shift Index methodology from June 1 to August 31, 2022. The daily minimum and maximum temperature CF were then averaged, then converted to CSI, and aggregated to Designated Market Areas (DMAs). The number of days with an average CSI greater than or equal to 2 for each DMA was then calculated.

Annual average summer (June–August) temperatures were obtained for each year of a station’s period of record using data from the Applied Climate Information System and were subsequently ranked. The period of record varies by station. Local graphics were not produced for eight stations due to missing daily data that could potentially impact this year's ranking, including: Albany, Ga.; Idaho Falls and Twin Falls, Idaho; Presque Isle, Maine; Greenville, Miss.; Glendive, Mont.; Manchester, N.H.; and Bend, Ore.