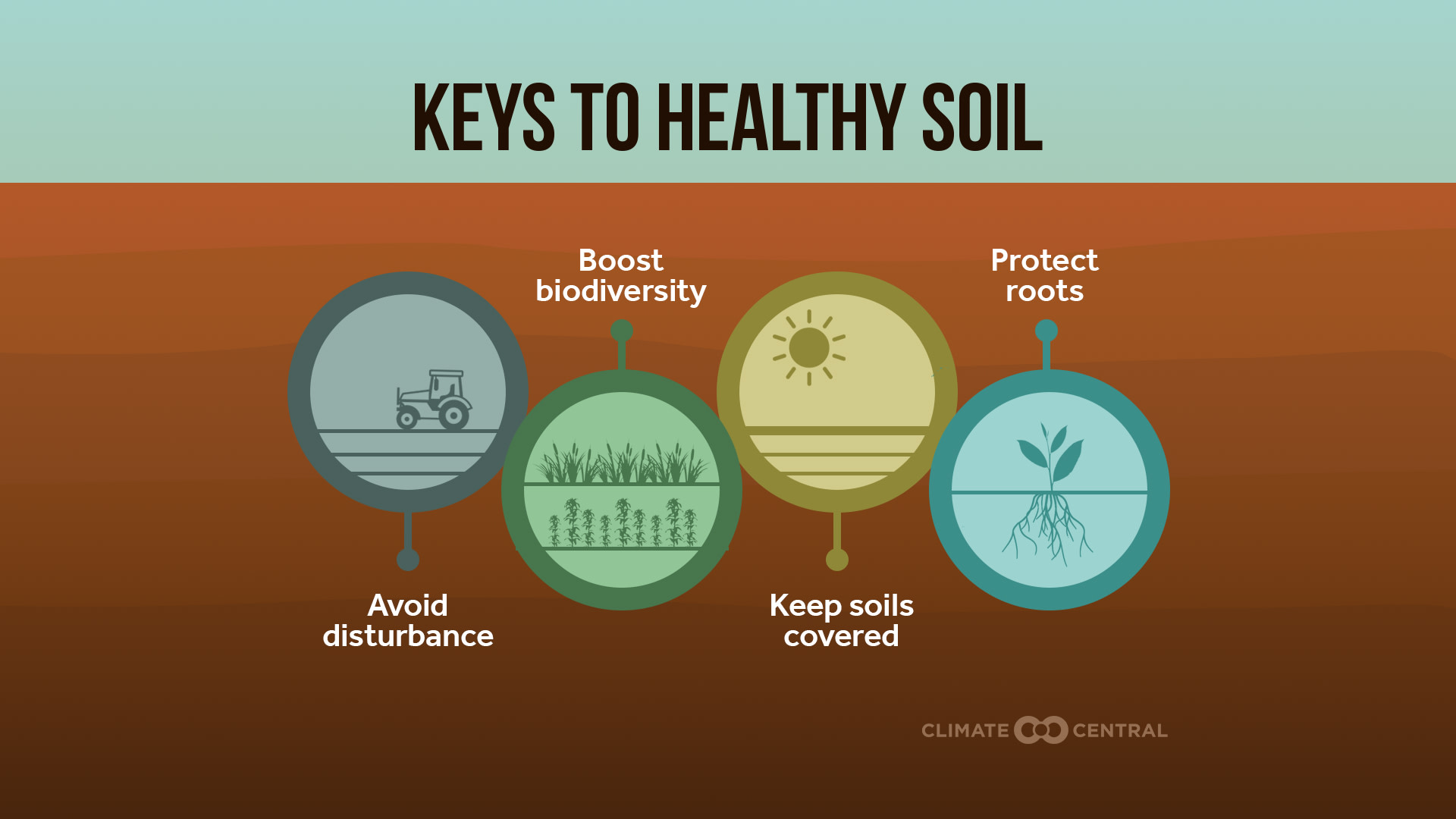 A key climate solution lies under our feet—in soils. Soils naturally remove carbon dioxide from the air and store that carbon underground. By keeping carbon out of the atmosphere, soils play a major role in balancing the global carbon budget and slowing the rate of warming.

Globally, burning fossil fuels (coal, oil, and natural gas) releases 9.5 billion metric tons (Gt) of carbon. For reference, 1 Gt is about 800,000 times the mass of the world’s largest tree (a giant sequoia in California), according to the USDA.

That’s a massive amount of carbon. Where does it all go? More than half of the carbon emitted into the atmosphere each year is absorbed by the oceans (26%) and by ecosystems on land (28%). The rest accumulates in the atmosphere, thickening the blanket of heat-trapping gasses that warm the planet.

If it weren’t for the oceans and land absorbing excess carbon from fossil fuel emissions each year, we’d see even more warming than we already have. And of all the carbon absorbed on land, the vast majority goes into soils. Maintaining and increasing carbon storage in soils is therefore a critically important climate solution, and the focus of Climate Central’s latest report.

Soils are dynamic living systems, and far more complex than they may seem. Although best known for worms, soils are also home to a vast array of other insects, bacteria, and fungi. These organisms are critical for soil carbon: they break down organic matter (carbon-based plant and animal remains) and release carbon into the soil.

In some ecosystems, that carbon can stay in the soil for a long time. But the amount of carbon that can be stored in soils depends on local ecosystems and land use (for example, whether a location is forested or used for growing crops). The key to soils reaching their full potential to store carbon is keeping soils healthy.

Climate Central’s new report summarizes approaches that can maintain or increase the amount of carbon stored in the soils of four major ecosystems: agricultural land, forests, grasslands, and wetlands.

Agricultural soils. Practices that promote soil health and boost carbon storage on croplands and pastures include:

Forest soils. Deforestation is a threat to the carbon stored in forest soils.

Grassland soils. Grassland carbon storage is especially important in the Great Plains and the western U.S.

Wetlands. Despite covering a relatively small area, wetland soils can store more carbon per acre than other ecosystems.

According to USGS estimates, the upper 7.9 inches of soils in the contiguous U.S. contain about 22.5 Gt of organic carbon—primarily in forests (36%) and agricultural soils (32%), followed by grasslands (21%) and wetlands (11%).

22.5 Gt of carbon is more than double the amount of carbon released worldwide from fossil fuels each year. And that’s just scratching the surface; the total carbon stored in deeper soils of the U.S. is estimated to be many times greater.

Due to their geographic distribution, forests, agriculture, grasslands and wetlands each play a different role in carbon storage within different U.S. regions. Based on the upper 7.9 inches of soil in each region:

These regional differences indicate that a one-size-fits-all approach to promoting soil health and carbon storage isn’t possible. Effective approaches must be tailored to local conditions and ecosystems.

What’s the status of soil health in your local area?

The USDA provides guidance on soil health assessment and indicators to look for. State university extension offices in your area (examples from Cornell University and The Ohio State University) will have more information and resources to understand and assess soil health indicators in your local area—from farms to backyards. The USDA’s Land-Grant University Partner Map provides links to extension offices in all 50 states.

What measures are being taken to improve soil health in your state?

Almost half the states in the U.S. have passed healthy soil legislation or related policies that encourage regenerative agriculture, decrease financial barriers and provide compensation for healthy soil practices. Check the U.S. Healthy Soils Legislation Map to learn about soil-related policies in your state. Sustainable Agricultural Research and Education (SARE) maintains a library of sustainable farming resources, including research and decision tools for soil health. You can search for local innovative sustainable farming projects in their state database.

How much carbon could cropland soils absorb in your state?

A set of graphics from Climate Central show the maximum amount of carbon dioxide that cropland soils in each state could absorb annually through adoption of practices that promote soil health. County-level soil carbon storage estimates for farms using different land management practices can be calculated from COMET-Farm and COMET-Planner tools developed at Colorado State University in collaboration with the USDA’s Natural Resources Conservations Service.

The SciLine service, 500 Women Scientists or the press offices of local universities may be able to connect you with local scientists who have expertise on soil carbon and climate change. The American Association of State Climatologists is a professional scientific organization composed of all state climatologists. The USDA provides contact information for state soil scientists in all 50 states as well as a Service Center Locator with contacts for Agency offices, searchable by state and county.