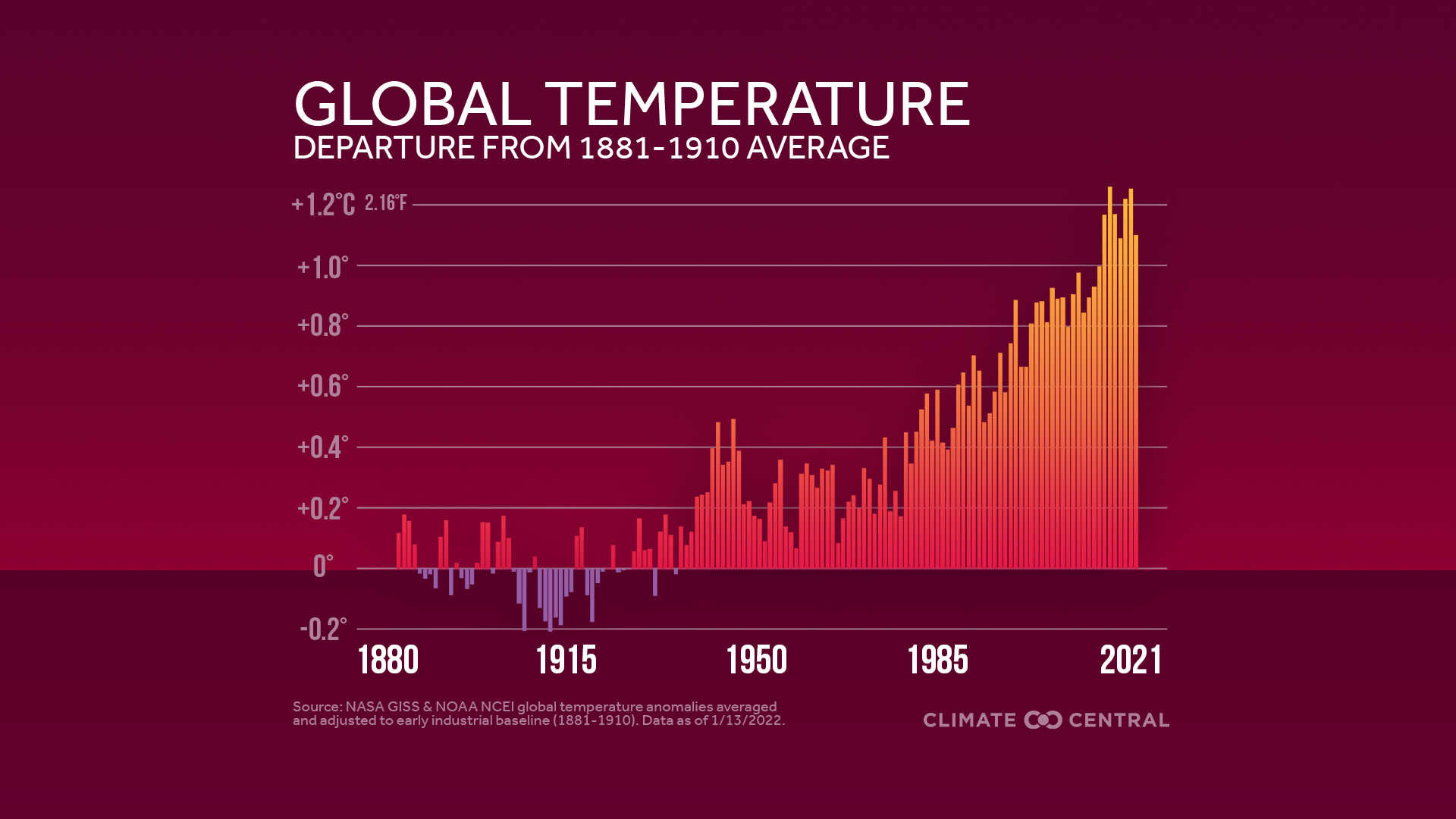 2021 was the planet’s 6th hottest year on record, according to NASA and NOAA’s year-end temperature analyses.

The world is heating up, even during a cooling phase. This winter saw a La Niña – the cold phase of El Niño Southern Oscillation (ENSO) – develop for the second year in a row. 2021’s record warmth indicates that even a global cooling phenomenon like La Niña is not enough to briefly mask human-caused warming.

The globe has earned its stripes… but don’t celebrate just yet.

JOIN OUR TEAM: We’re hiring a Meteorologist and a Researcher/Writer, and we’d be delighted to hear from you.

How do the 2021 global rankings compare to the U.S. and other regions around the world?
U.S. rankings can be found in our last Climate Matters release. Information and rankings of other countries and regions are recorded in the NOAA 2021 Global Climate Report. The website also allows you to select specific months, and look at significant events that occurred around the world. You can access a 2021 map of temperature anomalies here.

What are the signs and impacts of climate change in your local area?
See our latest seasonal packages (fall, winter, spring, and summer) for U.S. temperature trends and impacts. The EPA explores a number of climate change indicators with relevant maps and explanations here. Our media library brings together localized graphics for various media markets on topics like wildfires, sea level rise, and even pet health.

How extreme was 2021's weather?
Here is an interactive map of extreme events for 2021. An increasing number of billion dollar disasters, with a decreasing amount of time between events, makes it difficult for communities to recover. Natural disasters in 2021 cost the world an estimated $120 billion, ranking second only to 2017.

The SciLine service, 500 Women Scientists or the press offices of local universities may be able to connect you with local scientists who have expertise on climate change and temperature anomalies in your area. The American Association of State Climatologists is a professional scientific organization composed of all state climatologists.

NASA and NOAA scientists will be available for media interviews on 2021 Global Temperatures on Jan. 13 from 12-3 PM (EST) and Jan. 14 from 6-11 AM (EST). Access interview request form here.

Calculations of average annual global temperature are performed independently at NASA and NOAA. Small differences in their calculations arise as NASA’s calculations are extrapolated to account for polar locations with poor station coverage, while NOAA relies more heavily on the polar station data. Climate Central compares temperatures to an earlier 1880-1910 baseline to assess warming during the industrial era. Calculations of 2016 and 2020 showed a virtual tie (2016: 1.263°C, 2020: 1.254°C). The “warming stripes” was conceived and calculated by Ed Hawkins, as described here.