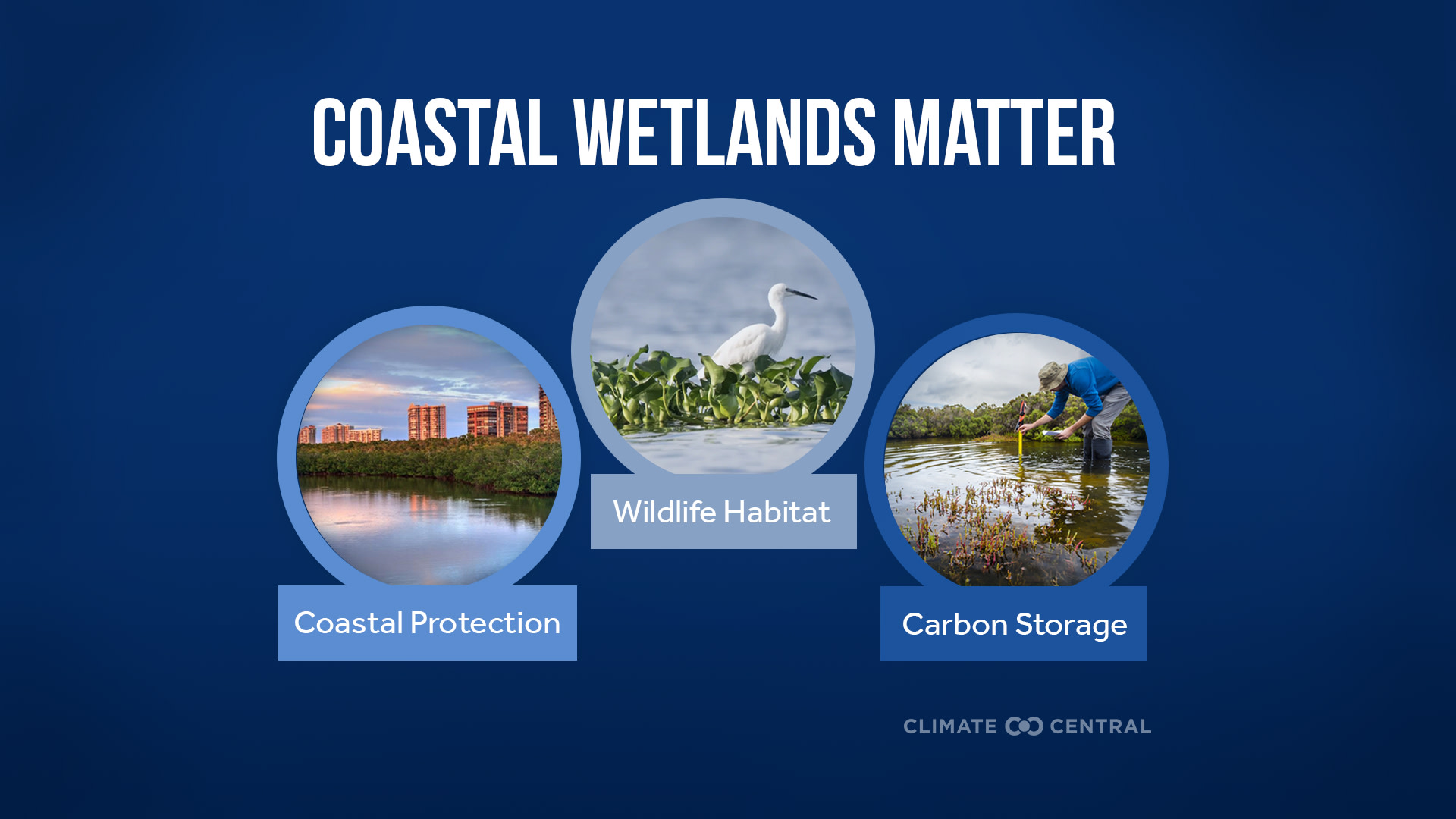 June 8, World Oceans Day, is a time to celebrate the oceans that cover more than 70% of our blue planet.

Most of us experience the vast global oceans only along the coasts—on beaches or in coastal cities. About 30% of the U.S. population lives in coastal counties. And wetlands are vital to these coastal communities, economies, and ecosystems. Despite occupying a small land area, coastal wetlands provide an estimated $746 billion of ecosystem services in the U.S.

Coastal wetlands provide flood and storm surge protection and erosion control for inland communities, habitat for ecologically and commercially important species, as well as water filtration, and recreation areas. Wetlands also store lots of carbon in their waterlogged soils, keeping it out of the atmosphere and thereby mitigating the effects of climate change.

In our warming climate, sea level rise threatens to accelerate the loss of coastal wetlands and their associated benefits. Coastal wetlands have natural defenses against rising waters: they can either migrate inland into undeveloped areas or grow vertically through sediment buildup and organic matter accumulation.

Mapping the Future of Coastal Wetlands

The tools show where wetlands could survive, expand, or recede each decade—depending on coastal development, pollution/sea level rise scenarios, and wetland growth rate.

These maps reveal the uneven distribution of coastal wetlands and their vulnerability to sea level rise.

Climate Central’s new study and mappingtools highlight where and how we can ensure the future resilience of our valuable coastal wetlands. As we face a warming future and rising sea levels, the ability of wetlands to store carbon—not only along the coasts but also in freshwater inland wetlands across the country—will be an increasingly valuable function to preserve and expand.

What are the primary coastal resources in your local area, and what future risks do they face?

What wetlands conservation measures are (or could be) in place locally?

The EPA’s Wetlands Protection and Restoration website includes helpful resources about wetlands science, conservation, and policy as well as contact information for regional wetlands program managers. The National Association of Wetland Managers monitors state and tribal wetland programs, publishes reports, and may be able to connect you with local wetland management officials. The National Environmental Education Foundation maintains a list of resources to learn more about wetlands in all 50 states.

We define coastal wetlands as undeveloped areas with elevations between the average local sea level (Mean Tide Level) and the mean peak water height during spring tides (Mean High Water Springs; MHWS). Starting in 2000, we model the upper bound of the wetlands elevation band tracking the rate of sea level rise, allowing migration to adjacent undeveloped land that becomes lower than MHWS. We model the movement of the lower bound of the wetlands elevation band as a function of the rate of sea level rise minus the surface elevation change of the wetland, which is bounded by the lesser of the maximum surface elevation change rate and the sea level rise rate. We then calculate the extent of coastal wetlands from 2000 to 2100 under two bounding coastal development scenarios (all refugia are conserved or all are developed), three sea level rise scenarios (low emissions, high emissions, and high emissions with rapid ice sheet collapse), and eight maximum surface elevation change rates (-1, 0, 1, 3, 5, 8, 10, and 15 mm/yr).