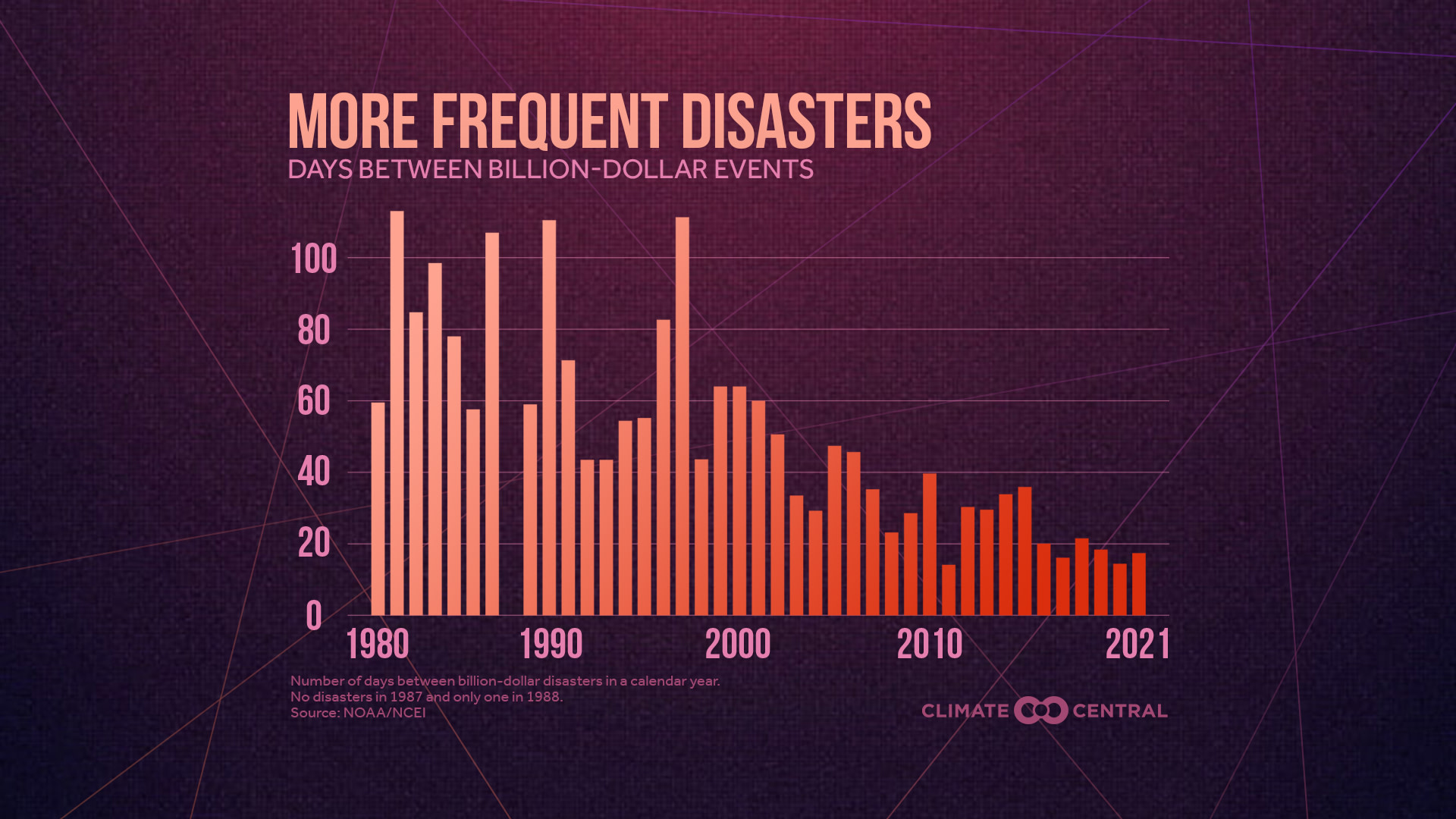 The devastation wrought by Hurricanes Fiona and Ian in Puerto Rico, Florida, and beyond has once again thrust weather and climate disasters to the forefront of the nation’s attention.

According to NOAA, the U.S. has experienced 15 weather and climate disasters with losses exceeding $1 billion each in 2022 (as of September 30). The total cost of these disasters through the end of September was  $29.3 billion. Adding up the final costs will take months after the end of the year to complete.

The costly and deadly billion-dollar disasters of 2022 so far have included:

It's not just the total number of disasters—but how often they occur—that strains the resources available for communities to manage risks and recover quickly.

Between 1980-2021, the time between billion-dollar disasters in a calendar year has dropped steadily, according to an analysis by Climate Central.

Less time between disasters can mean less time and resources available to respond, recover and prepare for future events.

The highest costs have resulted when multiple disasters occur in the same region and season, straining local resources—as during the Atlantic hurricane seasons of 2005 and 2017. According to NOAA, multiple billion-dollar tropical cyclones during these two seasons resulted in more than 5,000 lives lost and over $520 billion in combined damages.

The full toll of disasters

These staggering figures primarily reflect direct impacts on assets (including damage to homes, crops, and critical infrastructure), and therefore don’t reflect the full toll of disasters, including on public health—and especially mental health. According to the American Public Health Association, up to 54% of adults and 45% of children suffer depression after a disaster.

Weather and climate-related disasters can also result in widespread power outages (as occurred in Puerto Rico after Hurricane Fiona), displacement, and limited or unsafe food and water supplies, as well as loss of cultural heritage, biodiversity and habitats.

These figures also don’t convey the disproportionate impacts of disasters on people in poverty or the need for equitable allocation of federal disaster assistance in accordance with social vulnerability.

Disasters in a warming world

According to the latest IPCC reports, it is an “established fact” that human-caused greenhouse gas emissions have “led to an increased frequency and/or intensity of some weather and climate extremes since pre-industrial times.” And these trends are projected to continue with additional warming.

The ambition of the Paris Agreement—to limit warming to 2.7°F (1.5 °C) by 2100—is very likely to be exceeded by the mid-2040s at the latest without rapid emissions cuts. In November, nearly 200 nations will convene at the United Nations Climate Change Conference (COP27) to accelerate climate action. Without such progress, we can expect even more frequent and intense billion-dollar disasters in the future.

What’s the cost of billion-dollar disasters in your local area?

Billion-dollar disasters have impacted all 50 states, the Virgin Islands and Puerto Rico. The NOAA/NCEI website includes interactive tools for visualizing and summarizing billion-dollar disaster statistics. These tools can quickly identify the most costly and frequent types of disasters in your state or region for any time period from 1980-2022.

Not all disasters are billion-dollar disasters.

FEMA maintains a nationwide database of all disaster declarations and public assistance that is searchable by state or zip code. You can also search for current and historical National Flood and Insurance Program (NFIP) policy and claims statistics by state or county.

Is your county or city prepared for these events?

The SciLine service, 500 Women Scientists or the press offices of local universities may be able to connect you with local scientists who have expertise on weather extremes and climate change. The American Association of State Climatologists is a professional scientific organization composed of all state climatologists.

The time between billion-dollar disasters was calculated by measuring the time between the start date of each disaster as recorded by NOAA/NCEI. The difference in days was only for calendar year events, with the first event of the calendar year set as the first date. For this reason, there are no data points for 1987 and 1988, which had zero events and only one event, respectively.