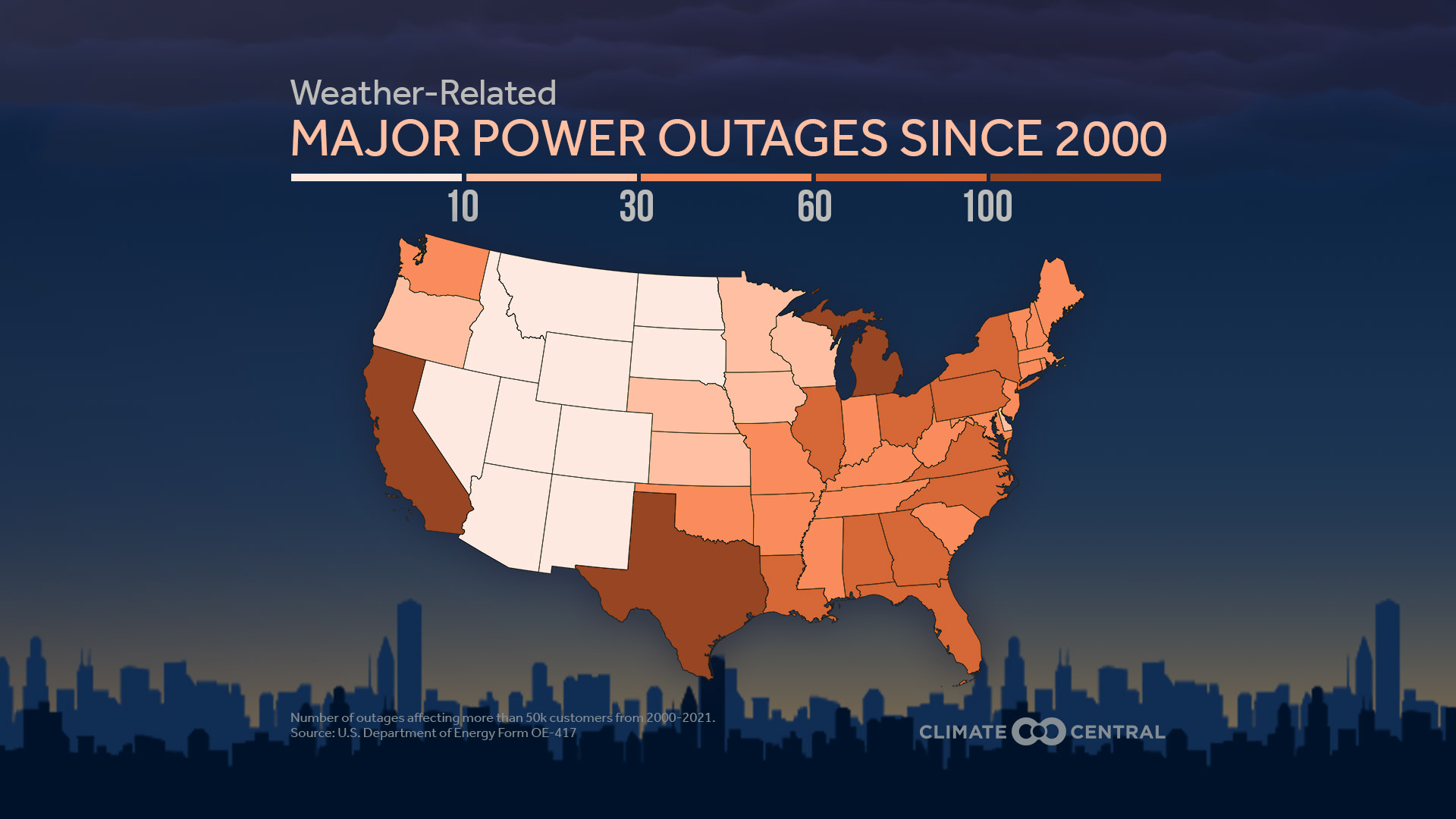 The power grid is essential, but vulnerable.

We all depend on the electricity system that serves homes and businesses across the U.S., but this system is vulnerable to large-scale outages caused by extreme weather.

The effects of climate change can both increase electricity demand and compromise electricity supply. And most of the nation’s electrical infrastructure wasn't built to function in our present-day climate. Further warming could impact electricity system performance, resilience, and capacity to meet demand.

Power outages are rising. Weather is often the cause.

Climate Central analyzed major power outages (during which at least 50,000 customers lost power) in the U.S. from 2000-2021, as reported by utility companies to the federal government and the North American Electric Reliability Corporation.

Outages by type of weather event

Utilities are required to describe the cause when reporting major power outages. The cause reported by utilities is often based on qualitative criteria rather than using specific quantitative thresholds (e.g., for severe weather). Climate Central conducted additional analysis to more accurately assign weather types to reported outages, where possible.

Because of the interconnected nature of the grid, some types of extreme weather, including winter storms and hurricanes, can affect large areas and cause power outages across multiple states and regions.

The number of weather-related outages varies among U.S. regions—which partly reflects the weather each region experiences, as well as relative population density and infrastructure age.

The states with the most reported weather-related power outages from 2000-2021 were: Texas (180), Michigan (132), California (129), North Carolina (97), and Pennsylvania (82)—all of which are ranked among the top 10 most populous states, however the populations of Texas and California are nearly three- to four-times larger than Michigan or North Carolina.

There are a number of promising and innovative solutions to build electricity security into our system now, especially alongside the anticipated near-term growth in renewable energy capacity. Here are a few:

Weather and climate disasters in your state or region
NOAA’s interactive tool allows you to visualize the frequency and cost of billion-dollar weather and climate events over time for the country, geographical regions, and states. The EIA has a map to help identify risks to energy infrastructure from significant storms and other weather events. Local utility companies often provide current power outage maps and updates by zip code.

Are individuals and facilities in your area prepared for power outages?
FEMA and the CDC offer preparedness and safety guidance for power outages. And the Substance Abuse and Mental Health Services Administration provides research on how disasters affect low-income communities.

Tools for reporting on extreme weather events and disasters
Journalism schools and organizations provide advice for responsibly reporting on disasters, including focusing on safety, data, and cultural sensitivity. Be sure to check out Climate Central’s extreme weather toolkits (in English and Spanish) and online workshops for covering disasters.

The SciLine service, 500 Women Scientists or the press offices of local universities may be able to connect you with local scientists who have expertise on weather-related power outages and climate change. The American Association of State Climatologists is a professional scientific organization composed of all state climatologists.

Power outage data from 2000 to 2021 was collected from the U.S. Department of Energy’s Form OE-417 reports. Major outages are considered to be events that affected at least 50,000 customers. For the purpose of our analysis, we consider only power outages (including blackouts and voltage losses), fuel supply emergencies, and emergency appeals for reduced electricity usages where there was a reported number of customers affected or power lost and where outages were attributed to weather- or wildfire-related causes. We do not include reports of vandalism or cyber-attacks. Regional definitions broadly correspond with those outlined in the Fourth National Climate Assessment with the exception of Hawaii and Puerto Rico. Power outages that affected multiple states and regions were counted in each state and region's total number of events, but were counted only once in the national number of events.