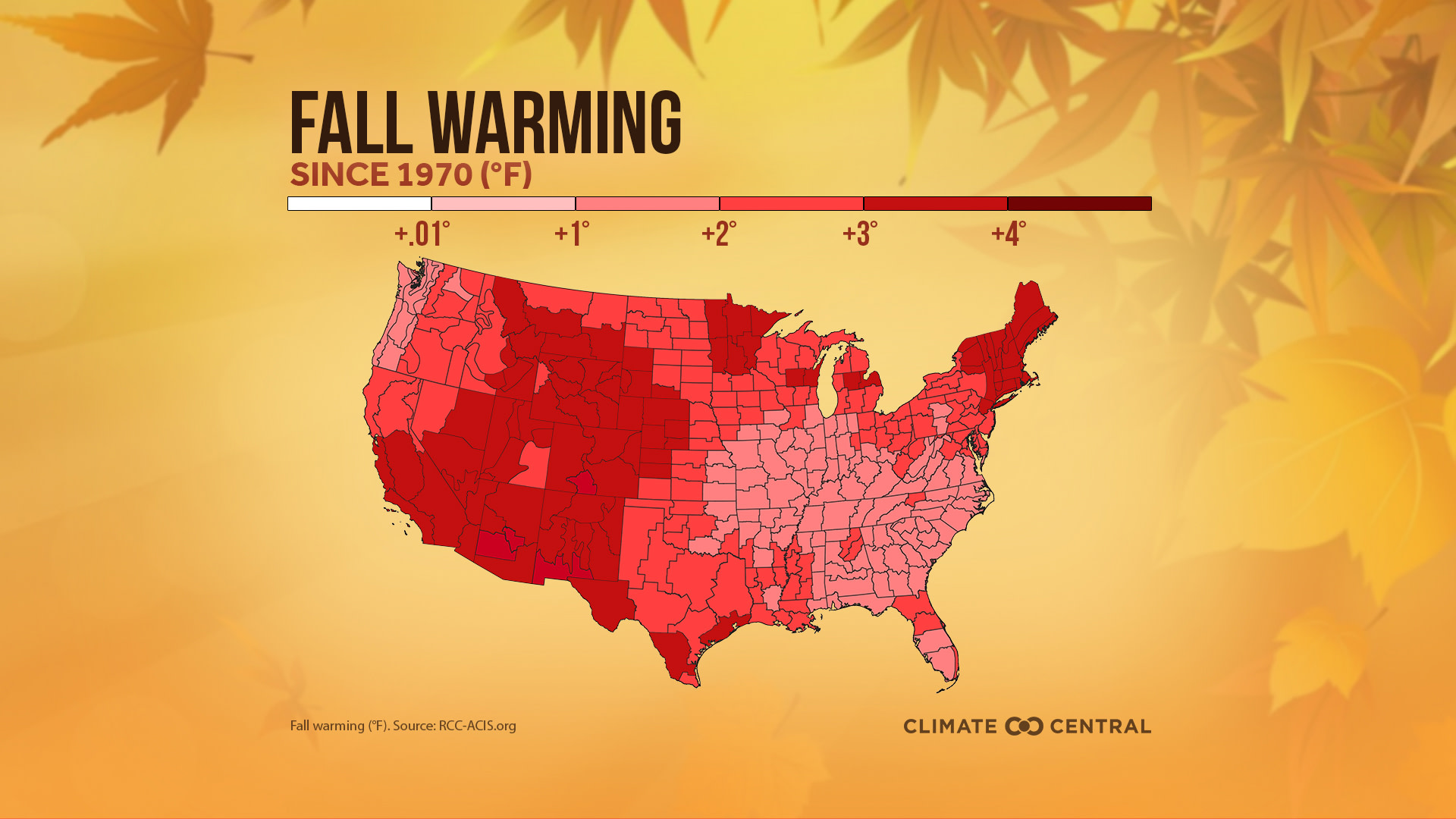 As the planet warms, all four seasons are warming too. Resulting shifts in plant growth cycles, animal migrations, or fire weather can have consequences for ecosystems, human health, and the economy.

Here, we assess how meteorological fall (September, October, November) has changed across the U.S. since 1970.

Fall warming across the U.S.

Fall temperatures have increased by 2.7 °F on average across the contiguous U.S. since 1970.

Fall warming has been nearly universal across the U.S., but some regions—including the western U.S., upper Midwest, and Northeast—have experienced more warming than others.

The warming season is also reflected in the number of additional fall days with temperatures that exceeded the 1991-2020 normal for the season and location.

When summer heat lingers into fall, it can extend the health risks posed by extreme heat and humid heat. Those most at risk for heat-related illness include children, older adults, people experiencing homelessness, outdoor workers, residents of low income communities, pregnant people, athletes, and others. When air conditioners are run later into the year to adapt, energy costs and heat-trapping emissions increase.

A warming fall also contributes to a longer and more intense pollen season for the millions of Americans suffering with allergies and asthma. Hotter falls also mean a longer wildfire season. Since 1973, the number of fire weather days in the western U.S. has increased across all four seasons. Beyond the direct impacts on burned areas, wildfire smoke combined with heat-driven stagnant air can further worsen air quality posing additional risk to human health.

Warming also allows disease-carrying insects such as mosquitoes and ticks to linger later into the fall. Fall warming can also disrupt the timing of ecologically important events like bird migrations, hibernation, and fruit ripening.

Warmer temperatures during both spring and fall also extend the growing season—which can be beneficial for some agricultural crops but also for the pests that can reduce their yields. Warmer growing seasons can also increase the potential for water stress in plants, especially in drought-prone regions of the West and Southwest that have experienced the most fall warming.

How is heat affecting local health, and who is most vulnerable?

The CDC maps heat-related illnesses in its heat and health tracker. To identify the most vulnerable counties check out this extreme heat vulnerability mapping tool that combines NOAA projected heat events and CDC's Social Vulnerability Index.

What’s the air quality in your local area?

AirNow, a partnership of multiple government agencies, offers a wildfire and smoke tracking map, as well as interactive air quality maps, extensive resources in English and Spanish, including those focused on air quality and health. The National Allergy Bureau’s Aeroallergen Network provides station-level allergen reports across the U.S.

Is your local area a hotspot for insect-borne diseases?

The SciLine service, 500 Women Scientists or the press offices of local universities may be able to connect you with local scientists who have expertise on fall warming and climate change. The American Association of State Climatologists is a professional scientific organization composed of all state climatologists.

Fall (September through November) trends were calculated using data from the Applied Climate Information System from 1970-2021. Fall days above normal are relative to the 1991-2020 NCEI climate normal. Changes in average temperature since 1970 for US climate divisions were calculated using data from NOAA/NCEI. Displayed trend lines on city analysis are based on a mathematical linear regression. Climate Central’s analyses include 247 cities, however, only 245 stations are included due to large data gaps in Tuscaloosa, Ala. and Wheeling, W. Va.