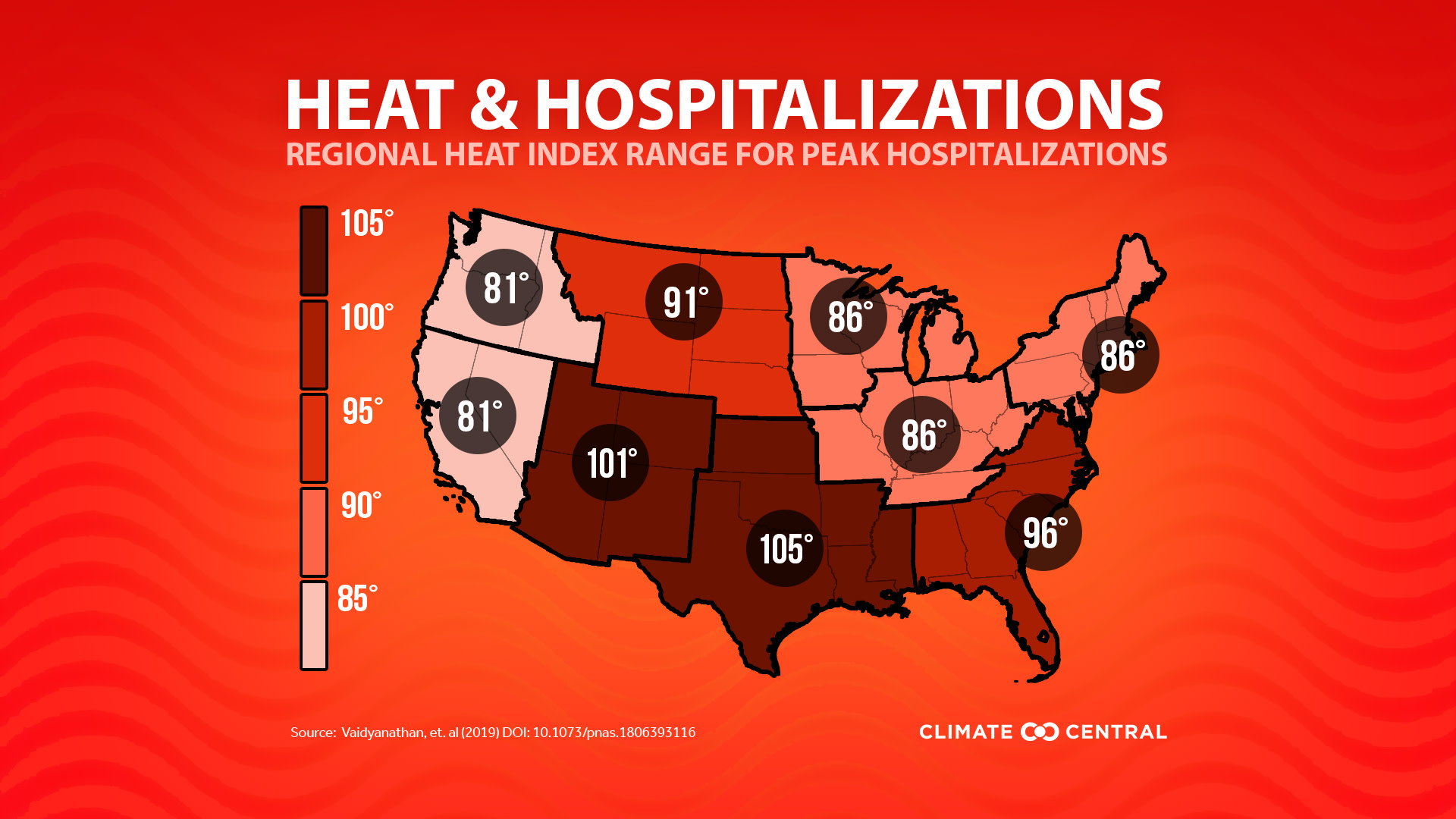 Heat is the #1 weather-related killer in the U.S., and climate change is making bouts of deadly heat longer and more frequent. The Pacific Northwest, a region with historically milder summers, experienced all-time record-toppling temperatures, such as 108℉ in Seattle and 116℉ in Portland. As our climate continues to warm we’re experiencing longer periods of intense heat, even in places that we don’t think of as hot, increasing the risk of heat-related illness.

People in historically cooler regions may be less acclimatized to heat, and lack the infrastructure to cope with it. According to the 2019 American Housing Survey, Seattle, WA is the least air-conditioned city of the top 15 metro areas surveyed. And while the southern United States appears to be better adapted to extreme heat, even these areas are getting hotter with climate change.

NOAA determines a heat index of 90 or above to present risk of illnesses such as heat stroke, muscle cramps and heat exhaustion. Climate Central’s analysis of these dangerously hot days found that the 25 locations with the largest increases in average number of days with a dangerously high heat index were located in the Southeast and Texas—all with over two additional weeks of dangerous heat compared to 1970. Of the 239 stations analyzed across the country, 70% (167) recorded an increase of 3 or more days of dangerous heat, and 46% (109) recorded an increase of a week or more.

Much of the country has struggled with extreme heat over the past two weeks. However, it affects us all unequally. Higher risk categories for heat illness include children, people over 65, and those with chronic health conditions such as diabetes, obesity, and heart disease. Increased exposure to heat puts those who work outside (e.g. construction workers, landscapers, farm laborers) at greater risk, too. Lower income communities are often more exposed to heat either due to historic redlining, or prohibitive costs of air conditioning.

Images are an important part of the extreme heat story and should help to illustrate the seriousness of the risk to human health.  Here are a few compelling examples:

The World Weather Attribution (WWA) group investigated how much the recent Pacific Northwest heat wave was attributable to climate change. Based on the highest temperatures during the event, they found that the heatwave was 150 times more likely and about 3.6°F (2°C) hotter as a result of climate change.

What measures are local officials taking to protect people from extreme heat?
The EPA maintains a Community Actions Database of measures that communities are taking to mitigate the heat island effect in their area. Emergency management can help reduce risk in vulnerable communities against the impacts of climate change. FEMA has a dedicated page with tools, data, and resources to learn more. For state specific emergency management information, search your state here on the USA.gov site. To learn more about projections for vulnerable populations, check out the stories and projects from ISeeChange.

How do local authorities assess if a heat advisory should be issued?
A 2019 study from the National Academies of Science found that heat-related hospitalizations may, in some regions, begin to occur before heat advisory messages are issued by the local National Weather Service (NWS) offices. You can contact your local NWS office to find out more about how they keep your community informed about excessive heat.

Which neighborhoods in your area are more susceptible to excessive heat?
Check out the Future Heat and Vulnerability Map created by the National Integrated Heat Health Information System (NIHHIS) that assigns a vulnerability score to each county across the U.S. based on race, income, and other parameters.

The SciLine service, 500 Women Scientists or the press offices of local universities may be able to connect you with local scientists who have expertise on extreme heat and climate change. The American Association of State Climatologists is a professional scientific organization composed of all 50 state climatologists. The American Red Cross opened cooling shelters in the Pacific Northwest, as well as Chicago and Detroit. You can find open Red Cross shelters here, and contact information for your local Red Cross location.

The daily maximum temperature and minimum relative humidity was assessed from 1979 to 2020 at the 239 contiguous U.S. stations typically analyzed by Climate Central, using the gridMET modeled dataset and based on the findings of Dahl et al. 2019. Heat index temperatures were calculated using the National Weather Service’s heat index algorithms. The change in the number of 90°F+ is based on linear regression. Local graphics were not produced for Eureka and Monterey, California or Flagstaff, Arizona due to a lack of days in which the calculated daily heat index met or exceeded 90°F during the study period.