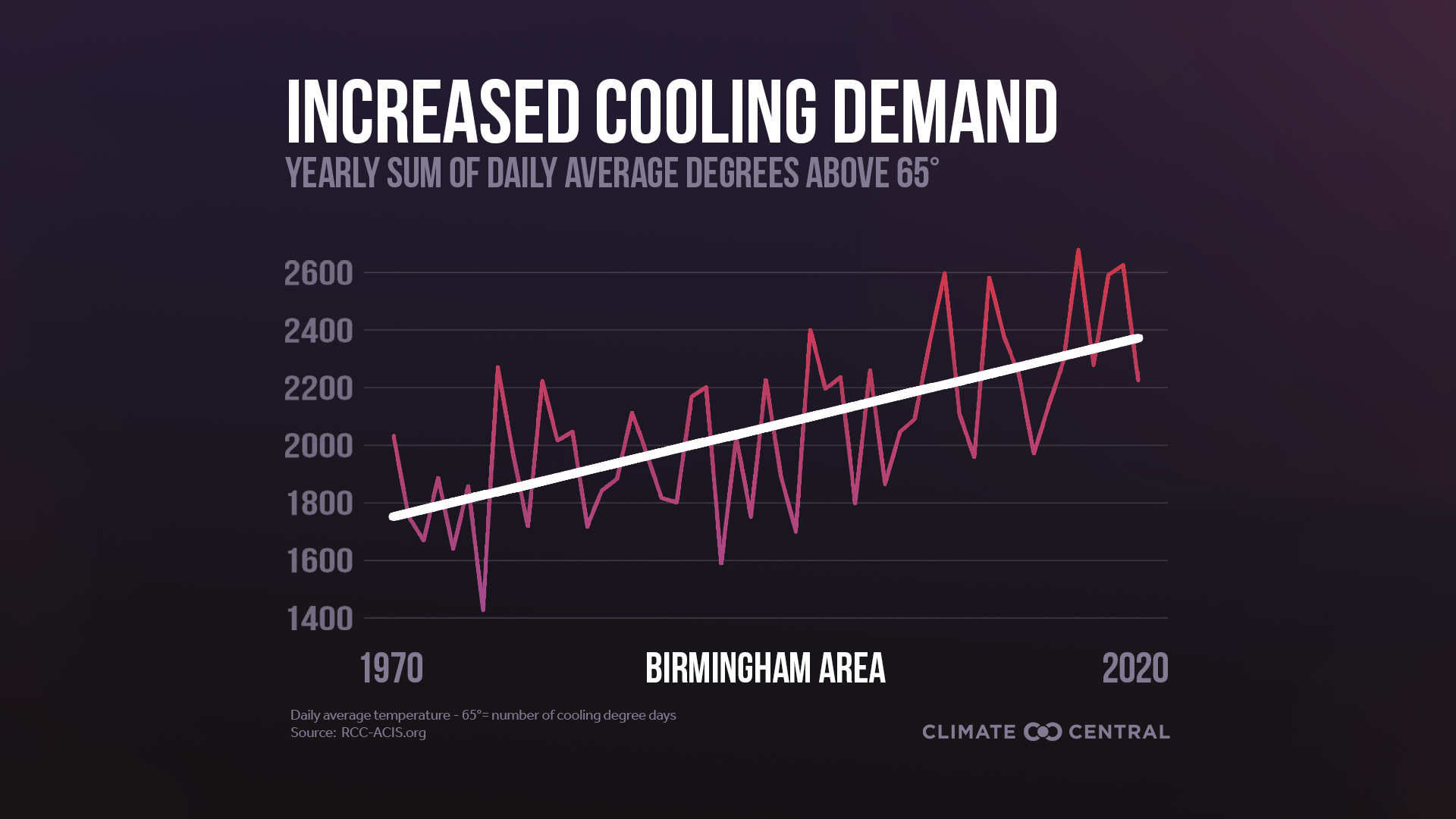 As our climate gets hotter, our cooling demand rises.
On those hot and muggy days, it's second nature to turn our air conditioning on full blast. As temperatures continue to rise due to climate change, cooling demands will increase as well. We can see this with last month's heatwave in the Pacific Northwest. The unprecedented heat forced many residents to purchase their first air conditioner to stay cool.

Tracking our energy use: What is a Cooling Degree Day?
To analyze cooling demand in the U.S., Climate Central used a data metric called Cooling Degree Days (CDDs). CDDs measure the difference between the daily average outdoor temperature and 65°F, an engineering standard that is considered the ideal indoor temperature. For example, a day with an average temperature of 90°F has 25 CDDs (90°- 65°). Since CDDs describe how much cooling is needed to maintain a comfortable indoor temperature, we can use them to determine changing energy demand to cool homes and buildings in a given location across time.

Take a look at the numbers to see how cooling demands have risen over time:

The burdens of high cooling demand:

Solutions: According to the Energy Information Administration, air conditioning consumption is expected to increase by 59% in U.S. homes and 17% in commercial spaces by 2050. The best solution to curb this high demand would be to transition to a cleaner electrical grid that replaces fossil fuels with renewable energy, like solar and wind. Other improvements include:

How can I find information about the most energy efficient air conditioners or where I can dispose of or recycle an old air conditioner?
Check out the Environmental Protection Agency’s Partner Database for Incentives and Joint Marketing Exchange (DIME) or enter your zip code, select the "Room Air Conditioner" box, and click the "locate special offers/rebates" button to find a room air conditioner recycling program in your area.

How costly is air conditioning near me?
The Energy Information Administration (EIA) estimates that air conditioning accounts for 12% of homeowners’ energy bills on average in the U.S., but these can vary greatly by region. EIA publishes the average monthly price of electricity for businesses and residents in all states here.

The SciLine service, 500 Women Scientists or the press offices of local universities may be able to connect you with local scientists who have expertise on cooling demand and climate change. The American Association of State Climatologists is a professional scientific organization composed of all 50 state climatologists.

Cooling Degree Days data was gathered via the Applied Climate Information System. Cooling degree days were calculated using the sum of the daily cooling degree days each year. Change in the number of days is based on linear regression. Climate Central's local analyses include 247 stations. However, for data summaries based on linear trends, only 246 stations are included due to large data gaps in Wheeling, West Virginia.