Defying dire outlooks issued in the spring, the 2013 Atlantic hurricane season, which officially ends Nov. 30, was the least active since 1982, and the sixth-least-active season since 1950, the National Oceanic and Atmospheric Administration (NOAA) said on Monday.

There were no landfalling hurricanes in the U.S. in 2013. In fact, it has been more than 8 years since the last major hurricane of Category 3 intensity or greater struck the U.S., a record stretch. The last major hurricane strike occurred in 2005, when Hurricane Wilma hit Florida. When the start of the 2014 Atlantic hurricane season rolls around on June 1, 2014, it will have been 3,142 days since that storm made landfall, a record timespan. 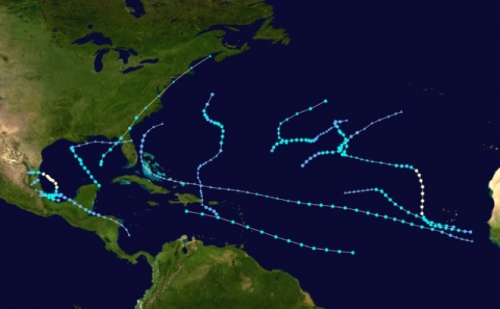 It’s not just major hurricanes that have avoided the U.S. in recent years. The 5-year period ending in 2013 has seen just two hurricane landfalls, although a third storm of hurricane intensity, Hurricane Sandy, made landfall mere hours after it had just been reclassified as a post-tropical cyclone, a distinction that matters more to meteorologists than the millions of residents impacted by the storm’s storm surge and high winds, both of which impacted the coastline while the storm was still classified as a hurricane.

Based on an index, known as Accumulated Cyclone Energy or ACE, which incorporates the number, strength, and duration of all the tropical cyclones in the North Atlantic Basin, the season had the lowest seasonal total since 1983, at just 30 percent of average.

The snooze of a hurricane season came as a surprise to forecasters, who had been expecting an above average to average season.

While preseason outlooks rarely, if ever, have pinpoint accuracy, they don’t usually miss by such a large margin.

Meteorologists have cited several reasons for suppressing Atlantic storms this year. Those inhibiting factors include an unusual abundance of dry, dusty air blowing off Africa’s Sahara Desert, an unusually stable atmosphere across the tropical North Atlantic, with broad regions of sinking air and above-average wind shear, which refers to winds blowing in different directions or at different speeds with height. 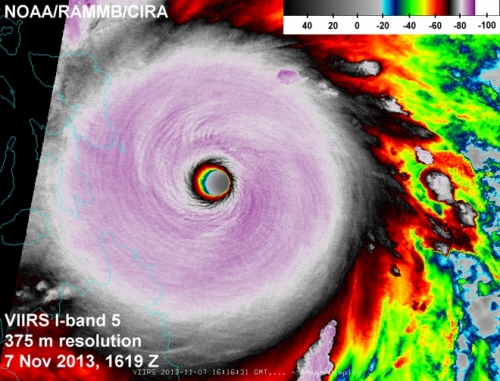 While the Atlantic was quiet, the Western Pacific Ocean gave rise to what was likely the strongest tropical cyclone on record at landfall. Super Typhoon Haiyan caused catastrophic damage in parts of the Philippines, killing at least 5,000.
Credit: NOAA/CIRA.

Tropical weather systems depend on a plentiful supply of warm, moist air to form and intensify, and when these storms ingest exceptionally dry air, as many of the storms did this year, they can choke to death in a matter of hours or days. For example, Tropical Storm Karen formed in the Gulf of Mexico, where landfall in the U.S. or Mexico is virtually assured. But it died before reaching land because of the presence of dry air and strong wind shear.

One sign of the quiet season was the limited number of hours flown by NOAA and the U.S. Air Force’s “Hurricane Hunter” aircraft. Those crews logged just 435 flight hours of reconnaissance missions into Atlantic Basin storms — the smallest number of flight hours since at least 1966, NOAA said.

The Atlantic Basin has been in an active phase since 1995, and the 2013 season was only the third below-normal season since then, NOAA said.

“A combination of conditions acted to offset several climate patterns that historically have produced active hurricane seasons,” Gerry Bell, NOAA’s lead seasonal hurricane forecaster, said. “As a result, we did not see the large numbers of hurricanes that typically accompany these climate patterns.”

Other nations, most of which are not as capable of handling hurricanes as the U.S. is, were not nearly as lucky this year. Mexico was hit by eight storms, including three from the Atlantic Basin. India was struck by Super Typhoon Phailin in September, and Super Typhoon Haiyan, which was likely the strongest tropical cyclone on record at landfall, devastated parts of the Philippines.