One of the strongest tropical cyclones to form in the Bay of Bengal since 1980 is heading for the northeast Indian state of Odisha, packing winds of close to 160 mph and a storm surge of at least 10 feet, but possibly much higher. The storm, named Phailin — a Thai word for “sapphire” — has intensified after weakening for a time on Thursday. By some measures, it may already have become the strongest storm on record in the Indian Ocean. It is expected to make landfall in Odisha or the far northeastern corner of the Andrha Pradesh State on Saturday afternoon or early evening.

The history of the Bay of Bengal region is littered with examples of tragic storms, and this one has the potential to kill thousands and displace many more. The storm is expected to be the equivalent of a Category 4 or 5 hurricane at landfall, bringing a life-threatening storm surge, heavy rains, and high winds to a broad swath of northeastern India. (Although named differently, tropical cyclones have the same characteristics as hurricanes and typhoons.)

The Bay of Bengal, which borders India, Pakistan, Bangladesh, Myanmar, and Sri Lanka, has been home to the deadliest tropical cyclone disasters on Earth. A whopping 26 of the 35 deadliest tropical storms worldwide formed in the Bay of Bengal, the Capital Weather Gang blog reported. That includes Cyclone Nargis, which struck Myanmar in 2008, killing an estimated 140,000 people.

For example, the Bhola Cyclone that struck Bangladesh in 1970 killed a staggering 300,000 to 500,000. Since that storm and several other deadly cyclones and monsoon events in this part of the world, scientists and relief agencies have worked to build robust early warning and response networks to ensure residents receive storm warnings and have safe places to go. That has dramatically lowered the death toll from cyclones in the area, although such storms still kill far more people, on average, than storms of similar strength that strike more developed countries like the U.S. 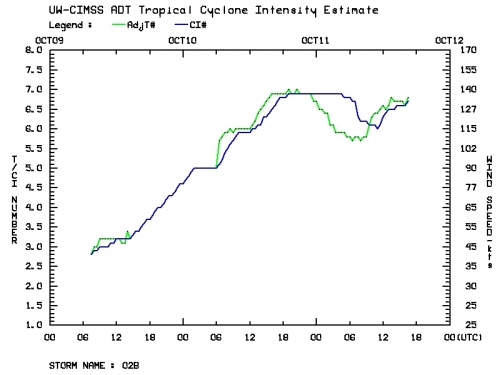 Peter Webster, a professor at Georgia Tech who has been involved in early warning projects along the Bay of Bengal, mainly in Bangladesh, told Climate Central in an email on Friday that he does not have much confidence in the Indian disaster warning system. “The populace will receive some warning, although only a couple of days,” he said, noting that his research group has been providing 10 days worth of storm data to the Indian Meteorological Department since the storm first formed. “(They) don't seem to acknowledge our forecasts,” Webster said.

“The death toll may be expected to be large, unfortunately. Their disaster warning system is poor and communication even worse. If the tropical cyclone were to make landfall at high tide, then expect the surge to be greater and the loss of life more.”

Other reports have questioned India's weather forecasters for downplaying the storm surge threat from Cyclone Phailin. 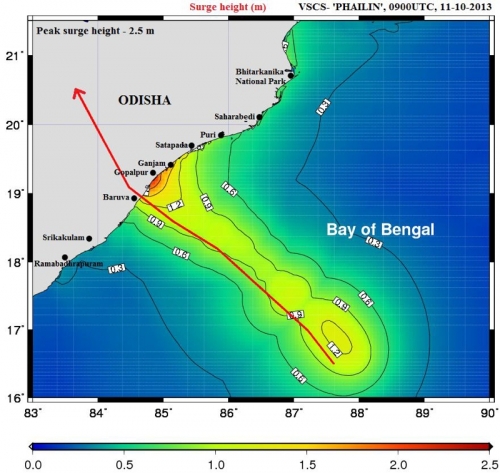 Tropical Cyclone Phailin may be comparable in size and strength to 1999’s Odisha Cyclone, if not a bit stronger than that storm, which also struck India’s east coast. That storm hit the coast near the city of Bhubaneswar as a Category 4 storm with 155 mph sustained winds, driving a surge nearly 20 feet high onto the coast.

As Jeff Masters of Weather Underground wrote, the Odisha Cyclone killed nearly 10,000 and caused $2.5 billion in damage. Masters said that if Phailin hits about 100 miles to the southwest of the 1999 storm, as is predicted by most computer models, it could cut down on the storm surge-related death toll, since the area is not quite as low-lying as the coastline is further northeast.

However, Hal Needham, a storm surge expert at Louisiana State University, warned that Phailin could generate the same level of storm surge that destroyed Galveston, Texas in 1900. “Tropical Cyclone Phailin has the potential to generate a surge at least 6 meters (20 feet) high. This surge height would be comparable to the storm surge generated by the Galveston Hurricane of 1900. This storm devastated Galveston Island, Texas, killing between 6,000 and 8,000 people in the deadliest natural disaster in U.S. history,” Needham wrote on his blog. 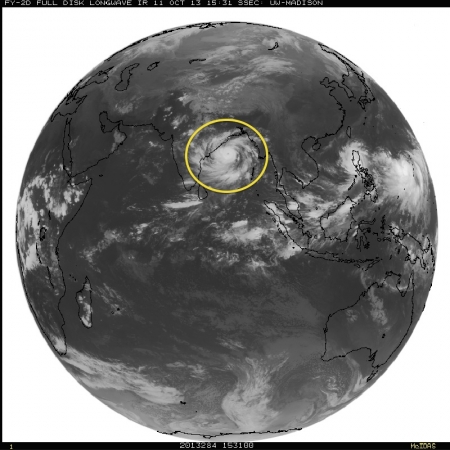 Mindful of what happened in 1999, reports indicate that the Indian government is mobilizing civil defense forces to evacuate at-risk residents and prepare storm shelters before Cyclone Phailin roars ashore. According to reports in the Hindustan Times and the BBC, at least 260,000 have been evacuated from coastal Odisha and Andhra Pradesh.

The BBC quoted Odisha’s disaster management minister as telling the NDTV news channel: “We are fighting against nature. We are better prepared this time; we learned a lot from 1999.”

Sea level rise due to climate change will only increase the risk of low-lying areas in Bangladesh and India to cyclone-related storm surge events. As weather.com reported, one small island that was involved in a dispute between India and Bangladesh disappeared entirely in 2010 due to rising water.

While India braces for Phailin, the U.S. has enjoyed a record long nearly 8-year stretch without a landfalling Category 3 storm or stronger.