Despite reports of a global warming “hiatus,” a new study shows that the number of areas being affected by extreme heat are on the rise and that the hottest temperatures on the planet are also increasing. 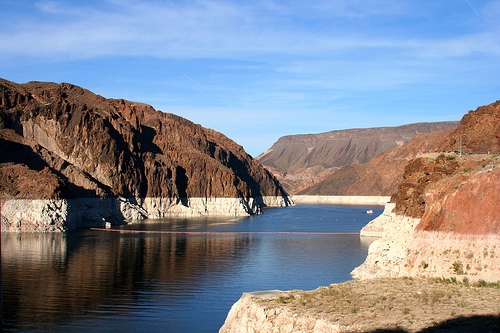 Extreme heat and dry conditions have helped lower Lake Mead's water level precipitously. New research shows more areas around the globe have experienced extremely high temperatures and those temperatures are on the rise since 1997.
Credit: ChrisMRichards/Flickr

Extreme temperatures are another metric, one that’s much more pertinent to people’s lives and livelihoods. Higher temperatures can reduce crop yields and drive up energy usage. And heat waves are the No. 1 weather-related killer in the U.S. There is evidence that suggests heat waves are becoming more likely due to climate change. Analyses of heat waves in Russia in 2010, Texas in 2011, and Australia in 2012 have all indicated that climate change played a role in making these events more likely.

In a commentary published in Nature Climate Change on Wednesday, researchers looked at changes in the prevalence of extremely high temperatures over land since 1979. Their analysis runs through 2012, the last year for which data are available.

“This study shows that the frequency of hot extremes over land has continued to increase in the last 15 years, despite an apparent stabilization of the global mean temperature,” study lead author and ETH Zurich researcher Sonia Seneviratne said in an email.

To perform the analysis, two datasets were used to essentially divvy the globe’s land into grids and then look at shifts in the number of areas experiencing 30 days of extreme heat per year compared to the 1979-2010 average. The study defined extreme heat as daily temperatures in the top 10 percent for a given area.

The study shows that in some years, natural variability gives extreme high temperatures a boost. During 1997 and El Niño years, there are noticeably more places with 30 hot days, which may be expected since El Niño tends to drive global temperatures up, too. However, the upward trend of extreme temperatures in both datasets is in line with projections that show extreme and record high temperatures and the number of heat wave days are likely to increase in many regions of the world due to climate change.

Seneviratne and her colleagues also looked to see at how temperatures above the 95th percentile have changed since 1997, a period that coincides with the reported slow down in global warming.

In spring, summer, and fall, most parts of the globe have seen extreme temperatures rise even more. Parts of Europe, South America, and the eastern U.S. have seen the most consistent rise across all three seasons. Extreme high temperatures have increased by up to 2.7°F per decade in those areas.

Winter is the one seasonal exception where extreme heat has taken a nosedive in widespread areas. In much of Russia, Canada, and the eastern U.S., extreme high temperatures have actually cooled by 2.7°F or more per decade. That is somewhat offset by parts of the Southwest U.S., Africa and South America seeing increases of a similar magnitude. Previous research has shown that winter cooling is the biggest seasonal chunk of the global warming slow down when looking at the globe’s average temperatures.

Regional differences are also noticeable when looking at annual changes. In much of South America, Europe, and the Arctic and Greenland, extreme temperatures have increased by as much as 2.7°F per decade. Much of the U.S. has seen the hottest of the hot temperatures increase 0.9°F to 1.8°F per decade. Interestingly, cold extremes across the globe are also getting colder but the trend is not nearly as strong.

“The reasons for the stronger increase of hot extremes compared to mean temperature over land is not totally clear,” Seneviratne said. 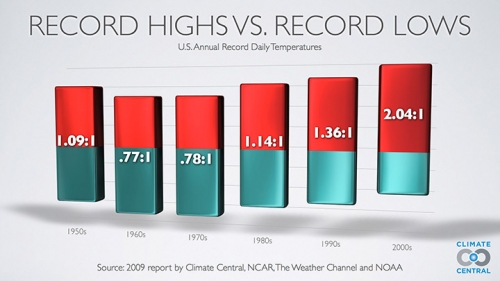 An increase in dry conditions in some regions of the globe could be triggering the rise in temperatures, she said. Drought and heat tend to work in concert. Dry conditions mean soil can’t “sweat” and reduce the surrounding air temperatures, which can trigger a warming and drying feedback loop similar to what played out in 2012 when a historic drought spread across the U.S.

Though this study only includes data through 2012, record heat has been a recurring theme throughout the globe since then. High temperature records were set in Alaska and Siberia in the summer of 2013. And 2014 began with heat waves in Australia, Argentina and Brazil, while Western Europe has seen record or near-record warmth.

“Previous studies have discussed the global mean temperature hiatus and possible causes,” said Markus Donat, a postdoctoral researcher at Australia’s Climate Change Research Centre who also worked on the study. “We show that the ‘hiatus’ is no general phenomenon. We don't see it when looking at the upper tail of the temperature distribution.”

Peter Stott, the head of climate monitoring and attribution at the U.K. Met Office, also agreed the study showed the concept of a hiatus is overblown.

“This paper provides additional evidence that the importance of the so-called ‘hiatus’ in global mean temperatures has been exaggerated in some quarters,” he said in an email. “In fact, additional energy continues to be accumulated in the climate system as a result of increased greenhouse gas concentrations in the atmosphere and this is causing many changes in climate, which have continued unabated.”

Understanding the cause for the relative plateau in the Earth’s average temperature is still an important scientific undertaking since it will ultimately help researchers improve models and understand how different factors affect the climate system.

But it’s also clear that other signs of climate change are continuing to occur, including increases in extreme temperatures, rapid loss of Arctic sea ice, and more extreme precipitation events. Understanding and documenting those changes provide important information about what adaptations are needed to cope with changing extremes.