A massive dome of high pressure, sometimes referred to as a “heat dome,” has set up shop over Alaska, bringing all-time record temperatures just a few weeks after parts of the state had a record cold start to spring. In some cases, towns in Alaska were warmer on Monday and Tuesday than most locations in the lower 48 states. 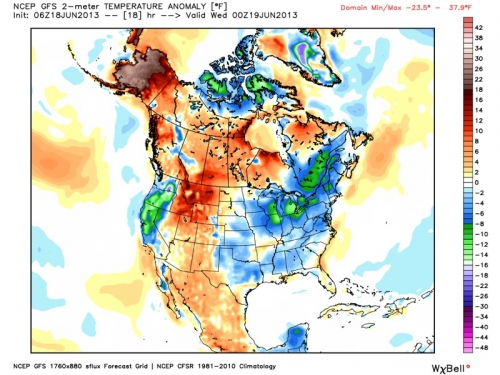 For example, Talkeetna set an all-time high temperature record of 96°F on Monday, smashing its previous mark of 91°F set a day earlier, and previously set in June of 1969. In fact, it was warmer in Talkeetna, which is about 110 miles north of Anchorage, than it was in Miami, based on data from the National Weather Service (NWS). (As Weather Underground's Christopher Burt notes, there was an unofficial observation of 98°F on Monday, which would rank among the hottest all-time temperature records for the state.)

Here is how the National Weather Service described the Valdez record (the ALL CAPS style is from the original public statement):

EXCITEMENT ABOUNDED THIS AFTERNOON ACROSS NORTHEASTERN PRINCE WILLIAM SOUND AS UNUSUALLY HOT TEMPERATURES WERE FELT ACROSS THE REGION. FOR THE PAST SEVERAL DAYS . . . HIGH TEMPERATURE RECORDS HAVE BEEN TIED OR BROKEN . . . BUT TODAYS TEMPERATURES SOARED BEYOND ANYTHING PREVIOUSLY SEEN IN THIS AREA.

THIS ALSO CRUSHED THE ALL-TIME RECORD HIGH TEMPERATURE FOR ANY DAY OF THE YEAR . . . AND FOR THE MONTH OF JUNE . . . WHICH WAS 87 DEGREES AND WAS ACHIEVED TWICE . . . ON BOTH THE 25TH AND THE 26TH OF JUNE IN 1953. A LOCAL WEATHER SPOTTER IN TOWN RECORDED A HIGH TEMPERATURE OF 87 DEGREES NEAR THE HOSPITAL DURING THE MID-AFTERNOON HOURS TODAY AS WELL. SUN-WORSHIPERS WERE OUT IN FORCE THROUGH THE MID TO LATE EVENING HOURS . . . AS THE TEMPERATURE AT 10 PM WAS STILL AN ASTOUNDING 77 DEGREES.

Extreme heat was also felt across the interior of Alaska, where hot temperatures are expected to continue this week until the large high pressure area, or ridge in the jet stream, weakens and moves away. The heat, combined with low relative humidity and the chance for thunderstorms, is raising the risk of wildfires across parts of Alaska. 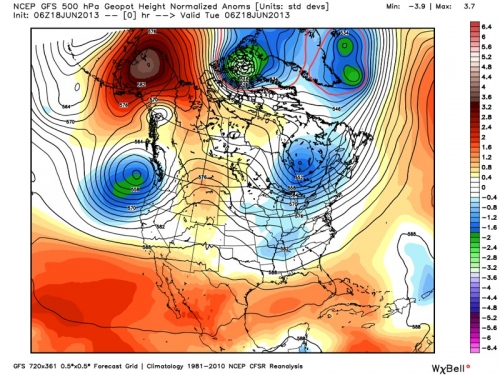 A map of the upper level air flow at about 18,000 feet. The bright red area over Alaska corresponds to an unusually strong area of High Pressure bringing warmer-than-average temperatures.
Click image to enlarge. Credit: WeatherBell.com.

On Tuesday June 18, McGrath set a record high of 91°F, beating the old record of 84°F set in 1962. Record highs were also broken or tied at Eielsen Air Force Base and Tanana, the NWS said.

The 90°F and 91°F readings in McGrath, a small town located about 220 miles northwest of Anchorage, are extremely unusual, and it comes on the heels of record cold that occurred during late May.

On May 18, McGrath set a record for the coldest temperature recorded there so late in the season, at 15°F. Fairbanks had an average temperature for the month of May that was 5.1°F below average.

In Nome, the high temperature reached 84°F Monday, breaking the record for June. The highest recorded temperature there for any month is 86°F, which could be within reach Tuesday.

Alaska is one of the fastest-warming states in the U.S., largely because the nearby Arctic region is warming rapidly in response to manmade global warming and natural variability. In recent years, Alaska has had to content with large wildfires, melting permafrost, and reduced sea ice, among other climate-related challenges.