An intense heat wave in Siberia has contributed to an unusual flare up of wildfires across the fragile and carbon-rich landscape. Smoke from the fires is lofting high into the atmosphere, and is drifting toward the Arctic, where soot can hasten the melting of snow and sea ice. 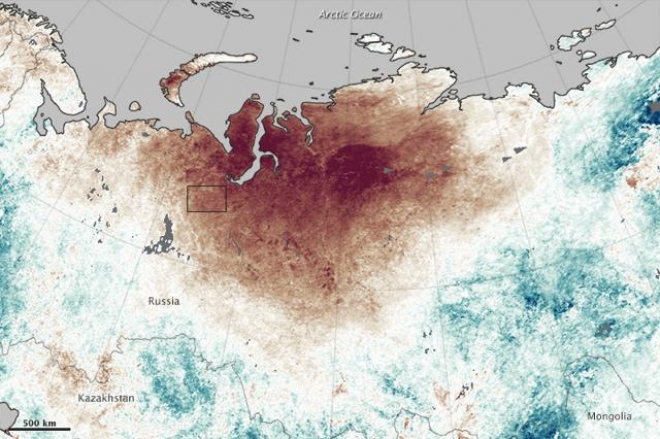 The map above shows land surface temperature anomalies for July 20–27, 2013, collected by the MODIS imager on NASA's Terra satellite.
Click on the image to enlarge. Credit: NASA Earth Observatory.

The Siberian city of Norilsk, the most northerly city in the world with a population greater than 100,000, recorded temperatures above 83°F over eight consecutive days starting on July 18, according to blogger Chris Burt of Weather Underground. During that timespan, Burt reported, the mercury hit 90°F, breaking the record for the hottest temperature recorded for the city. For comparison the average July high temperature in Norilsk is a comparatively chilly 61°F.

Norilsk isn’t an isolated example, but rather sits amid a sea of abnormally hot temperatures and smoky conditions in north-central Siberia. According to NASA’s Earth Observatory, from July 20 through July 27, temperatures were about 30°F above average across a large swath of this vast, sparsely populated region.

The warm weather has contributed to a spike in wildfires. As of July 29, wildfires continued to burn at least 22,200 acres in Siberia, according to news reports. Heavy smoke from them grounded commercial flights in Omsk, a city in southwestern Siberia, Russia Today reported.

The Siberian fires come on the heels of Russia’s worst wildfire season on record in 2012.  Fires burned roughly 74 million acres that year, well above the 50 million acres burned on average for the period from 2000 to 2008. While it’s still early to tell if 2013 will challenge 2012 for a record-setting year, one thing to note about this season is the unusual location of the fires. Typically, large wildfires burn on the southern fringe of the taiga, a dense forest ecosystem also known as the boreal forest, but this year’s fires are burning in a more central portion of the taiga.

Northern Russia has warmed more rapidly than many other places on the globe in recent decades, and according to NASA, researchers expect the number of taiga wildfires there to double by the end of the century.

A recent study of taiga wildfires in Alaska found that these forests are burning at the highest rate in at least the past 10,000 years, and climate change projections show even more wildfire activity may be to come as the northern climate continues to warm and precipitation patterns change. 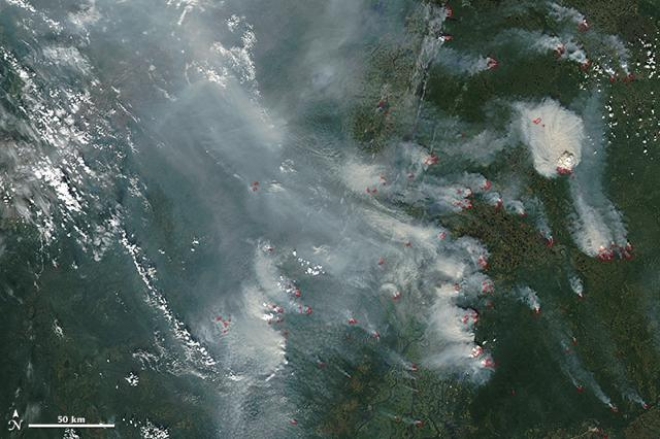 Concurrent with the heat in Russia, Alaska has had a hot summer too, with wildfires already charring more than 1 million acres across the state. In Anchorage, temperatures topped 70°F for 15 consecutive days in the latter half of the month. That beat the previous string of days above 70°F, which was 13 days set in 2004.

Temperature records have fallen from the coast to the interior. Fairbanks is nearing its all-time record for the greatest number of 80-degree days, having had 29, which is well above their average of 11 such days in a typical summer.

Trees, plants, and soils across the northern latitudes lock up 30 percent of the world’s carbon, far more than forests closer to the equator. The forests are also currently a carbon “sink,” which mean they take up more carbon than they release. While they still act as net carbon sinks at present, it’s possible that wildfires could help flip that role in the future by making these ecosystems a source of carbon dioxide and methane emissions that accelerate global warming.

Fires in the region also deposit soot on ice sheets and glaciers, reducing the amount of incoming solar radiation that the ice can reflect back to space. The dirty ice can then melt faster because it absorbs more heat. Research has suggested that process is already happening in Greenland. Speeding up the melt can contribute to increased sea level rise as well as shifts in weather patterns further south.

Greenland itself saw the highest temperature ever recorded on the island on Tuesday, according to the Washington Post’s Capital Weather Gang blog. The temperature reached 78.6°F in Mantiisoq located in the west coast of Greenland. The previous record of 78°F was set in 1990 at Kangerlussuaq, also located on the west coast.

The culprit behind much of the extreme heat in each case has been large, strong, and persistent areas of high pressure, which have set up shop over these high latitude locations, keeping cooler weather and precipitation at bay.