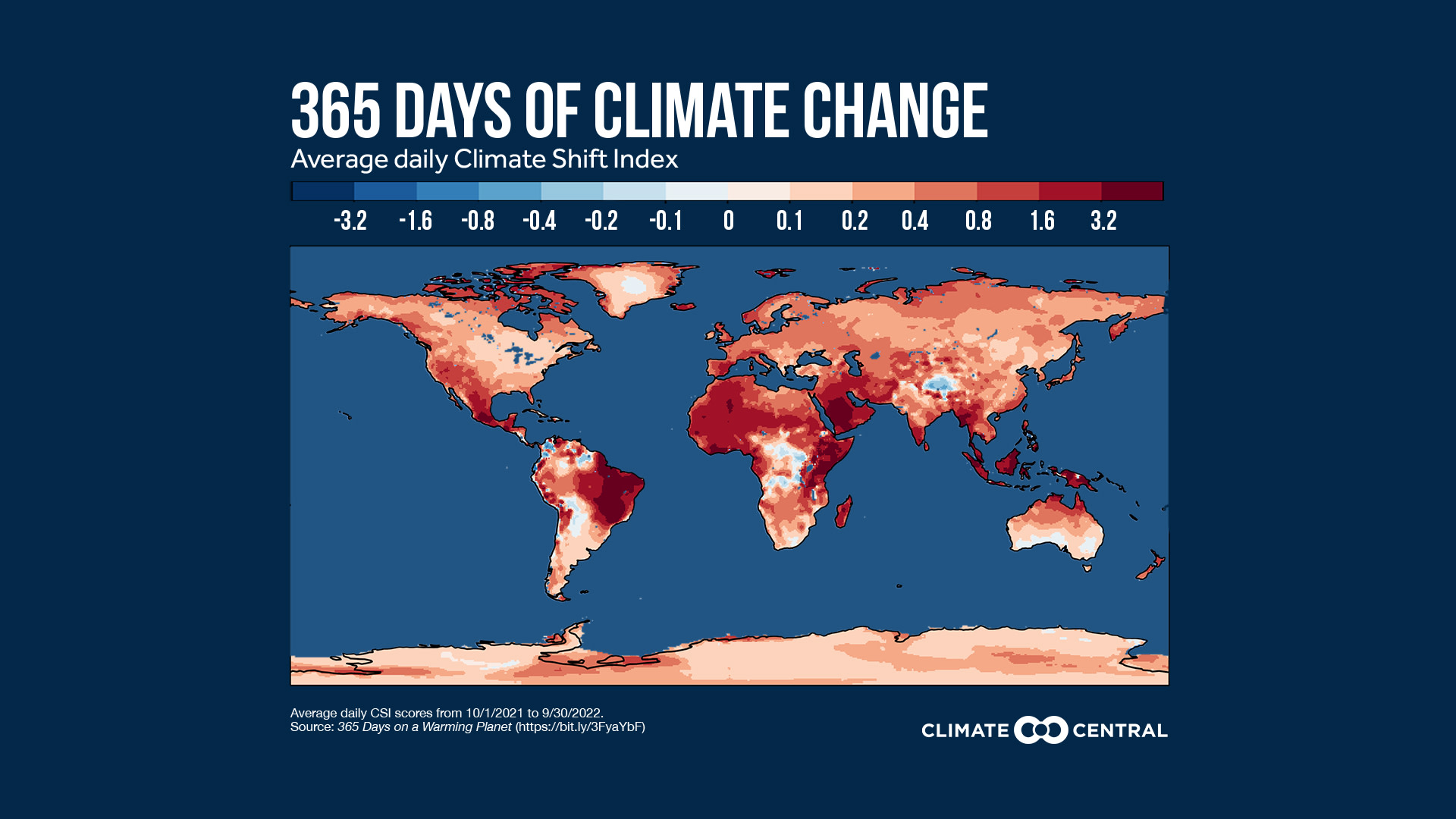 Scientists have been measuring the signals of human-driven global climate change for decades. We know how much planet-warming carbon dioxide we’ve released into the atmosphere since 1850 (660 billion metric tons). And we know how much global temperatures have increased since then (2°F, or 1.1°C).

The Climate Shift Index ™ launched in June 2022 and since then Climate Central has been operating a daily attribution service based on CSI and focused on the U.S. (CSI-USA) at the level of NOAA climate divisions.

Today, Climate Central is expanding the CSI tool to the rest of the globe (CSI-Global). We’re kicking off the global expansion with the first-ever global CSI analysis. This analysis reveals the influence of human-driven climate change on:

The global analysis also includes global population data to quantify how many people have experienced temperatures altered by climate change over the last 12 months.

Five ways to use CSI-Global now:

Highlights from 365 Days on a Warming Planet, the global CSI analysis

Human-driven warming affected everyone, everywhere. Over the last 12 months, human-caused climate change had a detectable influence on the daily temperatures experienced by 7.6 billion people. That’s nearly every person on the planet (96% of the global population).

Those living near the equator and on small islands were especially impacted. Mexico, Brazil, western Africa, eastern Africa, the Arabian Peninsula, and the Malay Archipelago were global CSI hotspots over the 365 days from Oct 1, 2021 to Sept 30, 2022.

The single day when the most people were affected worldwide: The maximum population exposure occurred on October 9, 2021—when more than 1.7 billion people worldwide (more than 20% of the global population) experienced warm conditions that were made at least 3x more likely due to human-caused climate change.

Global cities are feeling the heat. An estimated 55% of the global population lives in cities, where urban heat islands worsen the risks posed by extreme heat. Climate Central’s analysis reveals that billions of people in 1,000+ global cities are already experiencing climate change in their daily lives.

Cities in small island developing states had the highest average CSI scores. Apia, Samoa and Ngerulmud, Palau were the top two cities in terms of average daily CSI scores (4.5, meaning temperature made at least 4.5x more likely due to climate change). Both cities also experienced the most total days with CSI scores of 3 or higher: 331 and 328 days, respectively—more than 90% of the 365 days analyzed.

Global cities with climate-boosted temperatures: 26 of the 1,000+ cities analyzed had at least 250 days (69% of the 365 days analyzed) with CSI levels of 3 or higher. These cities were all in east Africa, the Malay Archipelago, Mexico, Brazil, and small island developing states in the Caribbean and Oceania.

Urban hotspots of human exposure to climate change: Global cities range vastly in the size of their population. When accounting for the number of people in each of the 1,000+ cities analyzed (i.e., multiplying the population of each city by the total number of days in that city with CSI levels of 3 or higher), CSI-Global reveals that the total number of “people-days” over the study period exceeded 1 billion in:

By expanding globally, the CSI-Global fills critical data gaps in many parts of the world. In doing so, this analysis reveals that the people most affected by human-caused climate change right now are often from places that have contributed the least to the global carbon problem.

Over the last 12 months, people in these places have lived through more days altered by climate change than anywhere else on Earth. And if the climate continues to warm, those impacts will only intensify.

What is the Climate Shift Index ™ ? How does it work?

Thanks to advances in attribution science, we can now measure the influence of human-driven climate change on the temperatures that people experience everyday, everywhere—using the Climate Shift Index ™ (CSI).

The Climate Shift Index ™ (CSI) is a tool developed by Climate Central in 2022 and grounded in the latest peer-reviewed attribution science.

The Climate Shift Index ™ (CSI) has 11 levels: five positive, five negative, and one representing no change. CSI levels indicate how climate change has altered the frequency of daily high, low, and average temperatures at a given location.

Journalists and meteorologists covering COP27 can sign up to receive email alerts summarizing daily CSI levels for the 1,000+ cities featured in this report, over the duration of COP27. Daily CSI-Global scores can provide readers with real-time understanding of the extent to which human-caused climate change made local heat extremes more likely.

The online map tool allows you to explore which parts of the world are experiencing high CSI levels—every day. And as of today, the city-level results from this global CSI analysis are available to download to explore in detail the exposure of urban residents on each continent to the fingerprints of human-caused climate change over the 365 days analyzed.

The SciLine service, 500 Women Scientists or the press offices of local universities may be able to connect you with local scientists who have expertise on climate change attribution and heat extremes. The American Association of State Climatologists is a professional scientific organization composed of all state climatologists.

For detailed information on Climate Shift Index ™ calculations, see the 365 Days on a Warming Planet report, the FAQs section on our website, and our peer-reviewed methods paper.