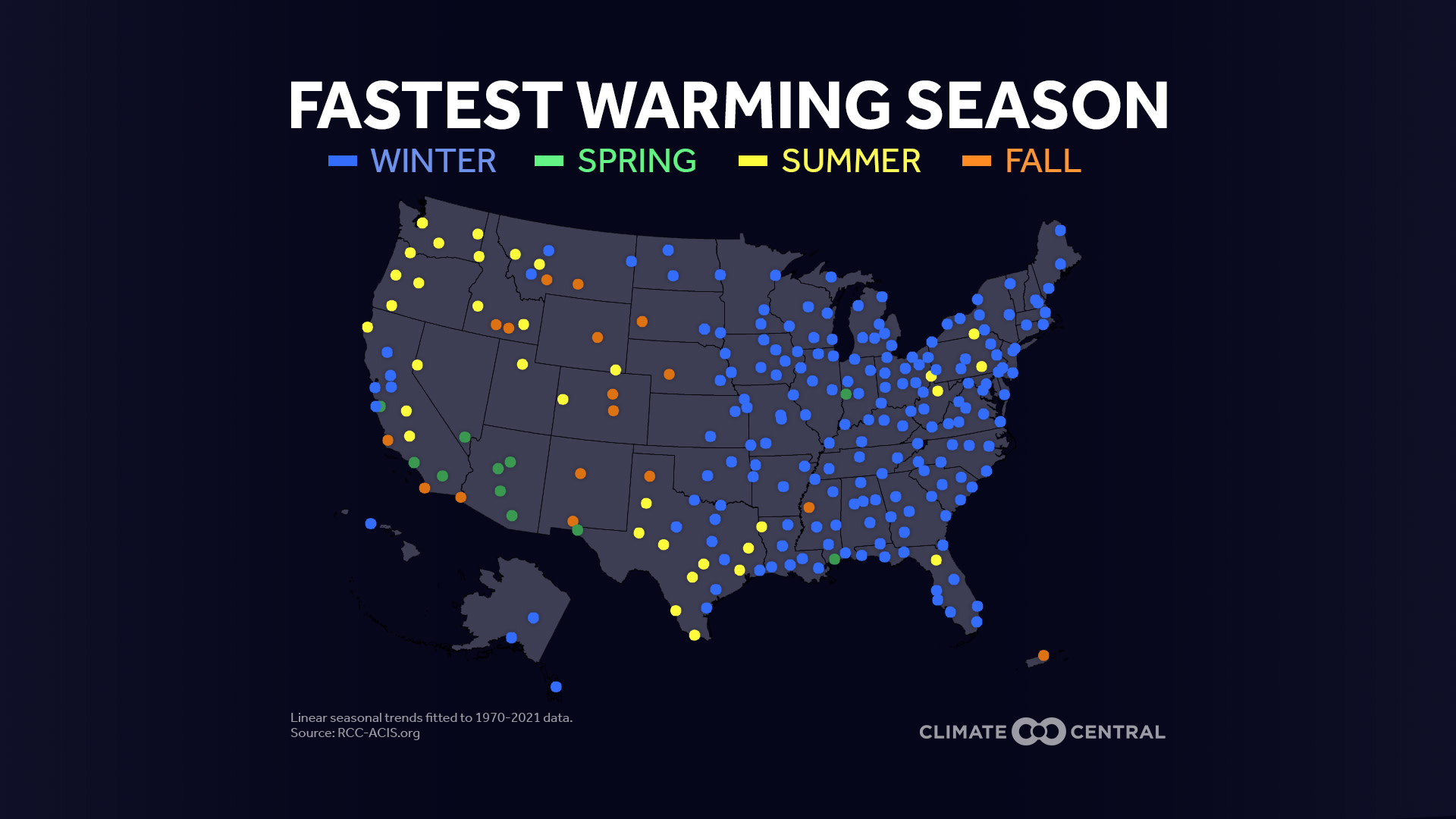 Season length and temperatures vary naturally from year to year. But the unprecedented rate of global warming observed since the 1950s, due primarily to emissions of heat-trapping gases, is influencing long-term warming trends in each season.

Climate Central analyzed seasonal warming trends since 1970 in 247 U.S. locations to see how much warming we’ve experienced in each season—and how quickly. Seasonal warming can have widespread effects on health, water supplies, fire seasons, agriculture, and more.

The most rapid warming in the U.S. has generally occurred when and where it’s usually the coldest, including at night, in northern parts of the country—and during winter.

Winter was the fastest warming season for the majority 74% (182) of the 246 U.S. locations analyzed by Climate Central. Locations with the fastest winter warming since 1970 were found from coast to coast, but were clustered in the Northeast and the Great Lakes region.

Fall and spring were the fastest warming seasons for many western U.S. locations included in Climate Central’s analysis.

Some locations in Washington, Oregon, Texas, and Florida saw summers warm most quickly.

Which warming impacts are most important in my area?

The EPA’s 2021 report, Seasonality and Climate Change, reviews the evidence of shifting seasons across the U.S. and discusses implications for each region and season. Explore EPA’s full set of Climate Change Indicators for more evidence and impacts of climate change across the U.S. The most recent National Climate Assessment (released in 2018) assesses climate impacts for 10 U.S. regions.

What’s the outlook for winter near me? How will that affect local heating energy use?

NOAA’s 2022-2023 Winter Outlook provides temperature, precipitation and drought forecasts for the winter ahead. The outlook predicts warmer-than-average temperatures for the Southwest, the Gulf Coast, and the eastern seaboard due in part to the third consecutive La Niña winter. The U.S. EIA’s 2022-2023 Winter Fuels Outlook forecasts home energy use and expenditures across the country.

The SciLine service, 500 Women Scientists or the press offices of local universities may be able to connect you with local scientists who have expertise on seasonality and climate change. The American Association of State Climatologists is a professional scientific organization composed of all state climatologists.

Trends for meteorological seasons are calculated using seasonal average temperature data between 1970 and 2022 (data from the Applied Climate Information System). For clarity and the ability to compare different seasons, we have omitted the annual data points and displayed only the linear trends over time. Your local seasonal trends may vary from your state seasonal trends due to a variety of factors, including microclimate influences. Stations with large gaps of missing data were removed from this analysis.