Winter Tops Charts As Warmest on Record For U.S.

On the heels of a record warm autumn for the contiguous U.S., winter has also topped the temperature charts.

The news, announced Tuesday by the National Oceanic and Atmospheric Administration (NOAA), may come as no surprise for those who experienced summer-like heat waves in Southern California or the often spring-like weather in the Northeast. It comes amid speculation that February may have also set a global heat record. 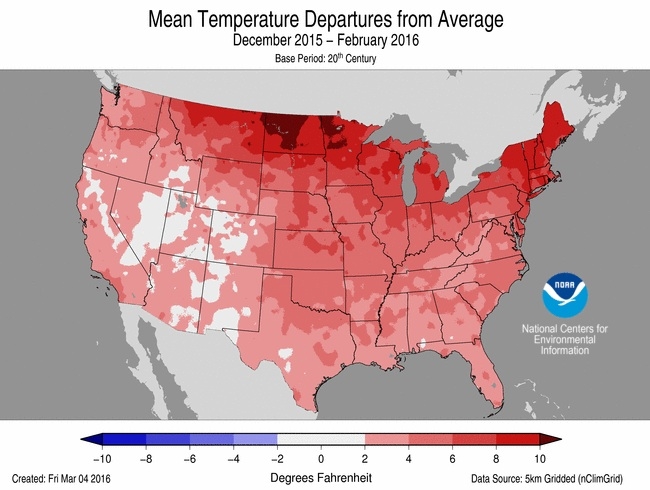 How temperatures compared to long-term averages across the contiguous U.S. during the winter of 2015-2016.
Credit: NOAA

The global data won’t be available until next week, but if it pans out, February would follow a record-warm January and the hottest year ever recorded.

These records show both the influence of the long-term trend in global warming — caused by the continued release of heat-trapping greenhouse gases into the atmosphere — as well as an exceptionally strong El Niño that is altering weather around the world.

Combined with autumn, the last six months were the warmest such period on record for the contiguous U.S.

The winter was also record warm for much of New England, including Connecticut, Massachusetts, Maine, Rhode Island, Vermont and New Hampshire.

Temperatures were the most above normal in the Canadian border region of the Northern Plains.

The warmth across the country wasn’t unexpected given the strong El Niño, which tends to lead to warmer conditions across the northern tier of the country as well as other climate patterns that tend to favor warmth in the U.S., NOAA climatologist Jake Crouch said. Those factors, however, were acting on the background warming that has led to an overall warming of winter temperatures across the U.S.

No area of the country saw below-average temperatures during the winter. 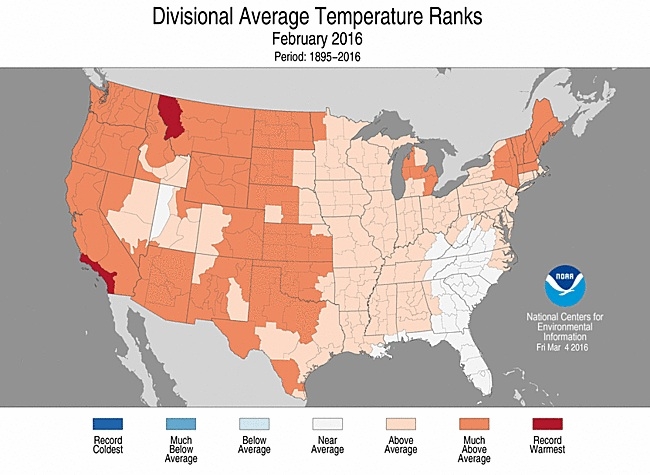 February itself was the seventh warmest for the Lower 48; Arizona was the only state that saw a record warm month. A swath of coastal Southern California was also record warm, a clear sign of how dry and hot it was in the area.

It was hoped that El Niño would fuel continued storm activity in California, but a relentless high-pressure area kept rains away. The resulting clear skies and heat waves sent temperatures around Los Angeles soaring into the 90s during the month. The month’s weather was a setback to any drought recovery in the state, though storms have since returned.

“I know the series of storms impacting the state now will likely provide some drought relief, but the state is kind of running out of time as we approach the end of the wet season,” Crouch said in an email. “We are really hoping that the El Niño pulls through over the next several weeks because the consequences could be huge if it doesn't.”

Outside of the contiguous states, Alaska also had a record warm February and its second warmest winter in the books; temperatures were more than 10°F (5.6°C) above normal for the season.

The warm temperatures have combined with a shifted winter storm track that has left parts of Alaska with very low snowpacks. Officials have even had to import snow for sections of the famous Iditarod race.

“This winter has not brought much of what we expect for Alaska,” Rick Thoman, climate science and services manager for the National Weather Service office in Alaska, said during a press briefing last month.

For the spring months, roughly more of the same is expected temperature-wise, with warmer-than-average conditions expected in Alaska, across the northern tier of the Lower 48 and in the West. That pattern will likely fade out as El Niño’s strength wanes, NOAA forecasters say.