Why You Shouldn’t Hope for An Early Spring

The spring of 2012 was the earliest recorded across the U.S. since 1900. In many states, signs of spring arrived almost three to four weeks earlier than expected. Unseasonable warmth prompted unusually early blooms, particularly on fruiting trees in the Northeast and Great Lakes regions. Observers in Massachusetts and Wisconsin reported that flowering came earlier than it had since Henry David Thoreau took note of when plants began to bloom near Walden Pond in the 1850s or since Aldo Leopold observed flowering times at “The Shack” in Sauk County in the 1930s and ’40s.

Then, in what has come to be recognized as a characteristic of climate change — unusual variability — the exceptionally early warm temperatures were followed abruptly by a hard freeze. 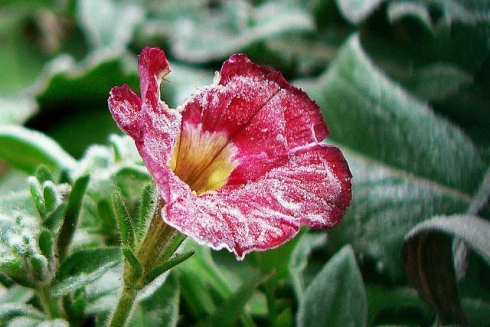 “We thought 2010 was weird. But 2012 was really weird,” says Jake Weltzin, executive director of the USA National Phenology Network.

Unusually early warming, known as “false spring,” is becoming increasingly common as climate changes. Its effects are also prompting increasing concern. For when warm temperatures awaken dormant plants and animals prematurely, they can throw the timing of seasonal events crucial to an entire ecological food web off kilter. The results can cause devastating harm to both wild and cultivated species. False spring events have caused enormous losses in U.S. fruit crops, damaged large swaths of forest and decimated sensitive California butterfly populations.

Naturalists and scientists, farmers and gardeners have long taken note of when plants leaf out and bud each year — part of the study of seasonal events known as phenology. Scientists and more casual backyard observers alike have noted an ongoing shift toward earlier springs across North America over the past 50 to 100 years. At the same time, a growing number of scientific studies have documented the advancing emergence of buds, blooms and hibernating animals.

Since the early 1900s, about two-thirds of the species studied have shifted toward earlier spring blooming, breeding or migrating. This is true for every major group of species studied, including amphibians, birds, fish, invertebrates and mammals as well as trees, nonwoody plants, corals and plankton. These changes have been observed on every major continent and ocean, according to Camille Parmesan, a professor at the University of Texas at Austin, whose research focuses on the biological impacts of climate change.

Early buds and blooms killed by a hard frost can mean failure to flower and fruit for the rest of that year.

The USA National Phenology Network, which gathers leaf-out and bloom data along with information about when species migrate and reproduce from across the U.S., has helped confirm that the advancing onset of spring and precipitous shifts between warm and cold temperatures are part of ongoing trends. While the network was officially established in the mid-2000s, observations recorded by its contributing scientists and volunteers date back to the 1950s. Some of the longest running records, which chronicle first leaf growth of honeysuckle and lilacs across the lower 48 states, show a noticeable shift toward earlier dates since the 1980s. Like the temperatures recorded as part of climate change research, the leaf-out dates show great variability from year to year but the trend is distinct — earlier warmer temperatures and earlier first buds and blooms. 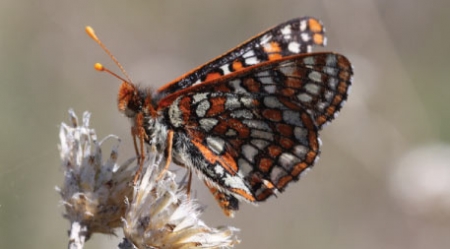 A series of false spring events contributed to the extirpation of a population of Edith’s checkerspot butterflies in the Sierra Nevada in the 1980s and 1990s as high temperatures desynchronized the time the butterflies emerged and the blooming of the plants they rely on for food, and heat and lack of moisture caused plants to dry up when caterpillars needed to feed on them.
Credit: Bob Danley/flickr

While occasional false springs are not new, what is new in recent years is the combination of increasingly warmer springs and extreme temperature swings, overall shorter times throughout fall and winter of below-freezing temperatures, and the altered precipitation patterns associated with global climate change.

The fall and winter warm spells in both 2010 and 2012, for example, were longer than others. This phenomenon increases the likelihood that plants will emerge from dormancy prematurely, producing young leaves, buds and blooms. When unusually mild temperatures and subsequent plant growth are followed by freezing temperatures, early buds and blooms killed by a hard frost can mean failure to flower and fruit for the rest of that year. And, in addition to the acute impacts on fragile plant parts, early warming can also cause problems by truncating the winter cooling period many plant seeds need for proper germination, plants need for budding and blooming, and hibernating animals need to complete their yearly cycles in good health.

The prospect of a freeze after a crop has leafed out, bloomed or set fruit presents obvious problems for farmers. The 2007 false spring, for example, hit agricultural crops and deciduous trees in the U.S. Midwest to Southeast and Mid-Atlantic regions particularly hard, causing crop damage — particularly to fruit trees and berries — that prompted a request for a disaster declaration in North Carolina. In 2012, losses in fruit tree crops in Michigan due to the false spring bloom and freeze cycles were estimated at half a billion dollars.

The timing of leaf and flower development has effects that ripple throughout an ecosystem because these changes prompt the flow of sap, nectar and nutrients within plants and so affect the availability of shelter and sustenance for other organisms.

False spring can harm not only the plants that put forth early sprouts, leaves or blooms, but other species and entire ecosystems. The timing of leaf and flower development has effects that ripple throughout an ecosystem because these changes prompt the flow of sap, nectar and nutrients within plants and so affect the availability of shelter and sustenance for other organisms. This can have profound consequences, particularly when species emerge from hibernation or during migration. Desynchronization of seasonal events has been reported around the world, from the American Southeast to New England, and the Rockies to the Tibetan Plateau and across Europe. Rocky Mountain marmots have emerged to find the plants they rely on for food buried beneath not yet fully melted snow. Butterflies in California’s Sierra Nevada have wriggled out of their cocoons in what seemed like spring warmth, only to be felled by the freeze that followed.

A series of false spring events contributed to the extirpation of a population of Edith’s checkerspot butterflies in the Sierra Nevada in the 1980s and 1990s as high temperatures desynchronized the time the butterflies emerged and the blooming of the plants they rely on for food, and heat and lack of moisture caused plants to dry up when caterpillars needed to feed on them. Photo by Striking (Flickr/Creative Commons).

Another disturbing effect of false spring is the damage it can cause to plant and tree cover. If a false spring freeze substantially reduces the success of trees’ summer leaf cover across wide swaths of landscape as it did in the U.S. Southeast in 2007, it can also reduce the amount of carbon and other nutrients those trees can process. This can lead to impaired soil health and also jeopardize the health of insects and other organisms that rely on plants’ nutrient cycling. And depending on which plants a false spring freeze affects, such events could also alter the balance of under- and overstory plants, thus introducing other potential ecosystem disruptions.

Anthony Barnosky, University of California, Berkeley professor of integrative biology and author of Heatstroke: Nature in the Age of Global Warming — a 2009 book that examines the effects of climate change on various species in the wild — says when trying to understand global warming’s implications, including those related to the false spring phenomenon, it’s important to consider how different affected species interact. “There are all sorts of complexities we need to be looking at in more detail,” he says.

“Species’ primary response to climate change is to move around the landscape and try to reclaim their climate space,” Barnosky explains. In other words: they try to find conditions that replicate those of the places where they had previously thrived. Indeed, University of Texas at Austin’s Parmesan reported in 2013 that a summary of numerous research studies conducted around the world over the past 10 years shows that since the early 1900s, approximately half of all species studied have shifted their ranges closer to the poles — between about 30 and 995 miles poleward — or upwards in altitude, as much as about 1,300 feet, seeking cooler temperatures.

From a food production standpoint, farmers around the world are trying to adjust to the growing likelihood of false springs by planting in ways that accommodate both early warming and temperature and moisture extremes, says Sharon Muzli Gourdji, postdoctoral fellow in energy and environment at Stanford University. Varieties of wheat are being bred for heat tolerance and other variables that come with climate change so they can endure warming temperatures in the tropical regions of Asia, Africa and South America as well as the challenges of both warming and extreme variability in the Northern Hemisphere. “Farmers are adapting,” says Parmesan.

Meanwhile, wild species are on the move in search of conditions suitable for their entire life cycle under increasingly unpredictable circumstances. But when success at a particular life stage depends on a steady transition from one season’s conditions to the next — a progression false spring disrupts — that’s when many species are now beginning to encounter difficulties. “The phenology issue could be a really big problem,” says Barnosky.

The consensus among scientists studying climate change is that the disruptions in what have been considered normal patterns of seasonal temperature and precipitation set in motion by the build-up of greenhouse gases are with us for some time to come.

According to Parmesan, we “don’t have any evidence yet of any evolutionary changes of the kind that would suggest species are adapting” to extreme temperature swings despite the fact that some species may already be capable of dealing with such extremes. Some species are responding to or accommodating these changes, she explains, but that does not necessarily mean an evolutionary adaptation. Weltzin, at the USA National Phenology Network, uses the term “adjustment.”

The consensus among scientists studying climate change is that the disruptions in what have been considered normal patterns of seasonal temperature and precipitation set in motion by the build-up of greenhouse gases are with us for some time to come. Even if there were a precipitous decrease of such emissions worldwide, what’s now in the atmosphere would continue to affect global climate patterns for years to come. Given this reality, early and false springs are also likely to become increasingly familiar phenomena. So among scientists’ next steps are to learn not only more about how species are responding to these events but also how to predict them.

While predicting false springs can’t help wild species in the same ways it can agriculture — or solve the root causes of the problem — it may point the way to conservation efforts that could help protect some vulnerable species. As Parmesan said of farmers’ adaptive strategies, “It may be very important to get that right.”

Reprinted with permission by Ensia.