What A Warming World Means for Major Snowstorms

The first flakes have already begun falling from New Jersey up through Boston. More than 5,000 flights have already been cancelled. Store shelves have been cleared of bread and milk. The blizzard is coming. 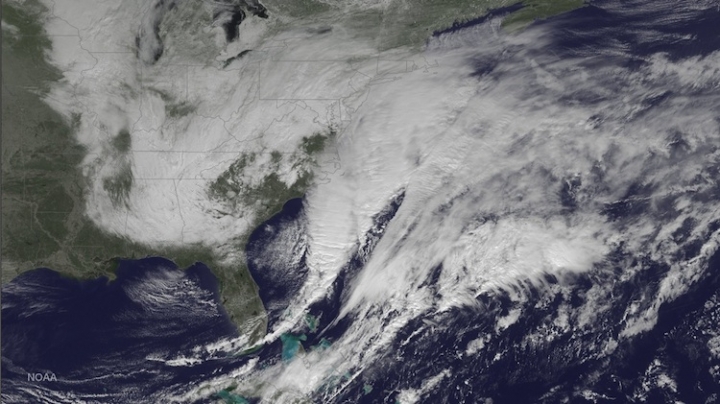 A major nor'easter is working its way up the East Coast and is set to drop potentially record-breaking amounts of snow on spots from New York City to Boston.

An intense nor’easter is slated to drop snowfalls ranging from a few inches to around 3 feet in the worst-hit spots from Monday through Wednesday according to forecasters, along with strong winds and storm surge in coastal areas. It might seem strange to talk about a major winter storm in the context of a warming world, but as the climate changes, extreme snowfalls may become a bigger proportion of all snowstorms.

Simply put, the warmer atmosphere holds more moisture, which can mean more snow as long as temperatures remain cold enough; average snow amounts are actually expected to decrease with warming by 2100, but the most extreme snows won't drop off quite as quickly.

Like other historic nor’easters that have buried cities like New York and Boston in the past, this storm’s potentially record-breaking snows are a product of, well, a perfect storm of atmospheric conditions.

The low pressure area at the heart of the storm is tracking along the East Coast in a way that lets it exploit the contrast between the cold air over land and the warmth of the oceans, which are running more than 2°F warmer than normal along much of the coast, said Kevin Trenberth, a climatologist at the National Center for Atmospheric Research in Boulder, Colo. The warmer ocean waters mean more moisture in the atmosphere for the storm to suck up; the cold air over the continent ensures that moisture falls as snow.

“The developing storm is in just the right position to tap into the high moisture over the ocean and develop as it experiences the sharp contrast between the continent and the relatively warm ocean,” Trenberth said in an email.

About half of the current anomalous ocean warmth, and therefore the enhanced moisture, can be attributed to climate change, Trenberth said. As the oceans and atmosphere warm due to the buildup of heat-trapping greenhouse gases, that moisture source could continue to grow, to the tune of 4 percent more water vapor in the atmosphere for every 1°F rise in global temperatures. Earth’s average temperature has already risen by 1.6°F since the beginning of the 20th century, and is expected to rise another 0.5°F to 9°F by 2100, according to the Intergovernmental Panel on Climate Change, depending on greenhouse gas emissions.

But whether that increased moisture means more snow in the future depends on how warm the air gets over land. Snowstorms occurring in the middle of winter like this nor’easter could drop more snow because temperatures are more likely to stay cold enough for the water to freeze.

“So as long as it does not warm above freezing, the result is a greater dump of snow,” Trenberth said of future storms.

But at the margins of the snowy season, it could warm enough that any storm will dump rain instead of snow, he said.

Paul O’Gorman, an atmospheric scientist at MIT, has looked at how climate models expect the intensity of extreme snowfalls to change compared to average snowfalls. His results, published last year in the journal Nature, suggest that while snows will decrease, the extremes will drop off more slowly than the average.

But observations of snowfalls over the past seven decades haven’t shown a clear trend for the Northeast. While there has been a 70 percent increase in heavy precipitation events in the region since 1958, most of that has been in warm weather rainstorms, Ken Kunkel, a researcher at the National Climatic Data Center in Asheville, N.C., said. 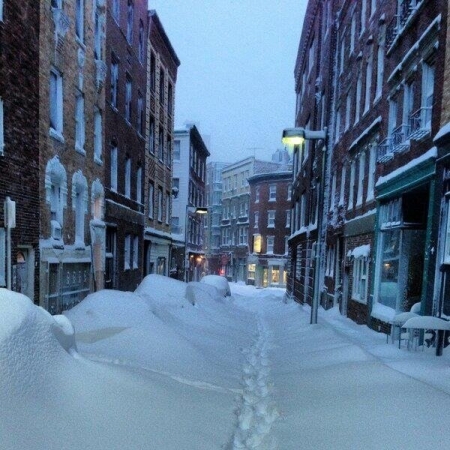 Snow is a fickle, hard-to-predict type of precipitation and the conditions that lead to it can be highly location-specific, so making broad statements about how snowfalls will change in a given region is difficult.

It’s also difficult to say how a warmer atmosphere might impact nor’easters, and extratropical cyclones more broadly. These cyclones are different from the tropical variety (a.k.a. hurricanes), which are fueled by moisture. Extratropical cyclones get their power from the temperature difference across a frontal system, so more moisture doesn’t necessarily mean more power, even though it means more precipitation, Trenberth said.

Some research has suggested that, like hurricanes, extratropical cyclones could become less frequent in a warmer world, but the ones that do occur will be more intense. But this “is an area of active research,” Kunkel said. “The definitive answers are a little elusive right now.”

One clear effect of climate change on the impacts of nor’easters comes not from the snows they’re associated with, but from the coastal flooding they can cause — an often underappreciated threat. Like hurricanes, the ferocious winds of nor’easters can whip up a significant storm surge that can then flood coastal areas. Such floods are even more likely due to the 1 foot of sea level rise off the Northeast since 1900, due in part to the expansion of warming ocean waters, as well as ice melt.

You May Also Like:
Cold Nights Are Decreasing Across the U.S.
Boston’s Got Gas as Methane Seeps from City
Tales of Ancient Sea Rise Told for 10,000 Years
Warming Ups Odds of Extreme La Niñas, Wild Weather