Congress did something unusual last year. It passed a bill that acknowledged that sea levels are rising — i.e., that climate change is happening.

The measure in question, buried near the end of a 584-page transportation funding bill, also required some modest action: That the Federal Emergency Management Agency use “the best available climate science” to figure out how the flood insurance program it administers should handle rising seas.

FEMA's first step was supposed to be to set up an advisory body, the Technical Mapping Advisory Council, that would make recommendations on how the agency could take the effects of climate change into account in its flood insurance maps. 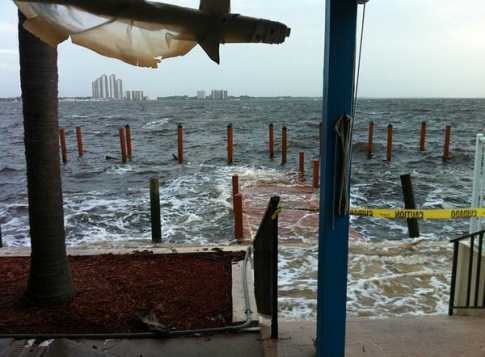 But more than a year later, FEMA hasn't named a single member to the council. Without any members, it has been unable to meet or make any recommendations. In July, the council missed a deadline set out in the law for submitting written recommendations for how the flood insurance program might deal with future risks related to climate change.

FEMA had developed a charter for the council by the end of August and was in the process of finalizing letters to solicit council members, according to the agency. Dan Watson, the FEMA press secretary, said he was unable to provide more up-to-date information because much of the agency's staff has been furloughed under the government shutdown.

Few areas of the federal government are more directly affected by climate change than the flood insurance program and its maps, which determine the premiums that 5.6 million American households pay for flood insurance. The program fell deeply into the red after Hurricane Katrina in 2005 and Hurricane Sandy last year. It's currently $25 billion in debt.

Many of the maps are decades out of date and therefore don't reflect the rise in sea levels since the time they were drawn.

FEMA released a report in June estimating that sea levels will rise an average of four feet by 2100, increasing the portion of the country at high risk of flooding by up to 45 percent. The number of Americans who live in those areas could double by the century's end, according to the report. 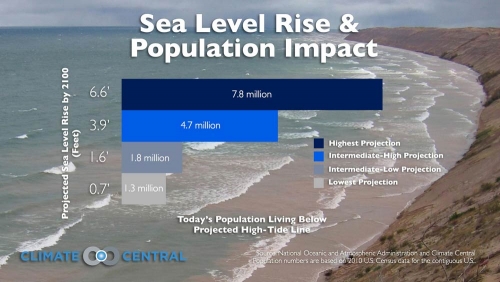 A look at each of the four National Climate Assessment (NCA) projections for sea level rise coupled with the population currently living within that elevation. More details >>
Click image to enlarge.
Credit: Climate Central

The law requires the council to outline steps for improving the “accuracy, general quality, ease of use, and distribution and dissemination” of the maps. Josh Saks, legislative director for the National Wildlife Federation, which pushed for the legislation, said that might include figuring out how to better take into account the way new development along a river, say, worsens flooding for those who live downstream.

“We need to know what the risks are to have an intelligent conversation as a country” about development in areas that are vulnerable to flooding, he said.

The measure was part of a broader package of reforms to the National Flood Insurance Program that phased out many of the government subsidies that had kept flood insurance premiums artificially cheap for many homeowners. The full-risk rates phased in for many policyholders on Oct. 1, despite vocal protests against them.

An operational mapping advisory council wouldn't fix everything that's wrong with the flood insurance program. As ProPublica has reported, some of the maps FEMA has issued in recent years have been based on outdated, inaccurate data, giving homeowners a misleading impression of flood risk and, in some cases, forcing them to buy insurance when they were not at great risk of flooding.

“That's why we put the council in charge,” said Saks, from the National Wildlife Federation. “I can read the science and say storms are happening more often, and I can read the numbers and see that sea-level rise is happening. But I'm not an actuary, and I don't know how you then translate that to” setting insurance rates.

The risk-modeling companies that private insurers rely on have struggled to take climate change into account in their models, but they are making progress.

“I wouldn't be too surprised if within the next five years we could credibly start to incorporate climate change into aspects of the modeling,” said David F. Smith, the vice president of the model development group at Eqecat, a risk-modeling firm.

Michael B. Gerrard, director of the Center for Climate Change Law at Columbia University, said he wasn't surprised FEMA had been slow in setting up the council.

“It's the rule, rather than the exception, that federal agencies miss the rule-making deadlines” set out in laws, he said. “Often they have to be sued to get back on schedule.”