Federal officials are preparing for another challenging fire season, driven by tinderbox dry conditions in much of the West, and complicated by budget cuts that will limit the number of firefighters agencies can put in the field.

“We are facing another dangerous wildfire season,” said Interior Secretary Sally Jewell, speaking to reporters from the National Interagency Fire Center (NIFC) in Boise, Idaho. Jewell noted that 12 of the hottest years in the West have occurred during the past 15 years. As temperatures have increased, due in part to manmade global warming, and spring snowpack has melted earlier, large wildfires have become more common across parts of the West. 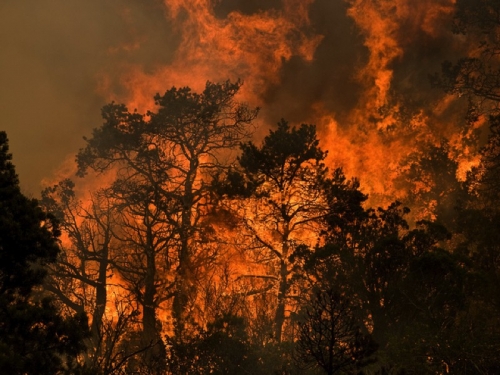 The anticipated escalation in U.S. wildfire activity comes after the slowest start to wildfires in at least 10 years, according to Jeremy Sullens, a forecaster at NIFC.

Due to a combination of drought and record heat, 2012 saw one of the most destructive wildfire seasons on record, with 9.3 million acres going up in flames, the third-highest since 1960, said Agriculture secretary Tom Vilsack on the conference call.

The below-average wildfire activity to date has mainly been due to recent rains in the Southeast, which has limited fire risk. So much rain fell in Georgia during March and April that a two-year, severe drought all but vanished, effectively canceling that state’s spring wildfire season. The below-average number of wildfires so far this year, Jewell said, “has no bearing on where we think this fire season is going to go.”

During the rest of May and June, the wildfire focus will shift West, where, according to Sullens, “It’s a very different story.” Drought conditions have encompassed nearly the entire Western half of the country, with the worst of it centered in the Southwest and into California, which received only about 25 percent of its average precipitation during the year-to-date. “We’re confident we’re going to see above-normal significant fire potential,” Sullens said.

California has gotten a head start on its wildfire season, with several large blazes occurring earlier in May, including the Springs Fire near Los Angeles.

Sullens said that there is above-average wildfire potential from the Southwest and into the Four Corners region during the first half of summer, until the Monsoon Season kicks in later in July. In New Mexico, the 30-month period ending in March 2013 was the driest on record, and reservoir and river levels are reflecting this shortfall. The Brantley Reservoir on the Pecos River in southeastern New Mexico is at just 1 percent of capacity; and the combined storage in the four reservoirs on the Pecos River is at 25 percent, according to the latest U.S. Drought Monitor.

Forecasters are also concerned about a high risk of large wildfires along the Pacific Coast from California northward to Washington, and inland into Idaho and Southwest Montana, where very dry conditions exist in areas that have an abundance of vegetation, or fuel, to support potential fires. 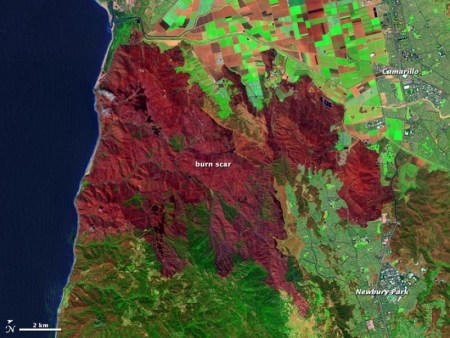 A satellite image showing the burn scar (area in red) from the Springs Fire in California.
Credit: NASA.

Large blazes are becoming more common in the West as average temperatures increase and spring snowmelt occurs earlier in the year. In addition, land-use changes have helped contribute to more wildfires as communities expand into previously unoccupied territory.

Vilsack said the combination of the drought, an abundance of dead or weakened trees from an epidemic of mountain bark beetles, and a likelihood of another unusually hot and dry summer is “a combination that doesn’t bode well.”

Federal agencies, led by the USDA and Interior Department, will have to fight this season’s fires with fewer people and equipment than they are used to, due to mandatory budget cuts known as the “sequester,” as well as other budget cuts to a variety of programs. The sequester, which took effect on March 1, required across-the-board spending cuts to virtually all federal agencies and programs.

That means that the federal government will have a smaller arsenal of firefighters and equipment to devote to combating this summer’s blazes. Instead of the 10,500 firefighters the Agriculture Department typically fields, Vilsack said this year there will be only 10,000, along with 50 fewer fire trucks than normal. In total, the federal government will have more than 13,000 fire personnel at its disposal, including permanent and seasonal federal employees; up to 26 multi-engine air tankers and two water scooper aircraft; along with about 27 single-engine air tankers, and hundreds of helicopters.

Jewell, who is just beginning her fifth week on the job, said the Interior Department is putting an emphasis on protecting lives and property from wildfires, which means that fewer resources are being devoted to other agency programs.

Ironically, both the Agriculture and Interior Departments have been forced to cut programs that are aimed in part at reducing wildfire risk over the long-term, in order to ensure that enough firefighting resources are available this year.

For example, Vilsack said the U.S. Forest Service’s forest-thinning projects are being scaled back, which could increase wildfire risk in the future. “We’re going to do the best we can to maximize the utilization of the resources that we have to safeguard life and property,” Vilsack said.