While a Nor’easter is currently causing misery from Washington, D.C., to Boston, in the form of rain and snow on the busiest travel day of the year, another, perhaps more welcome, storm is set to hit the West Coast later this holiday weekend. 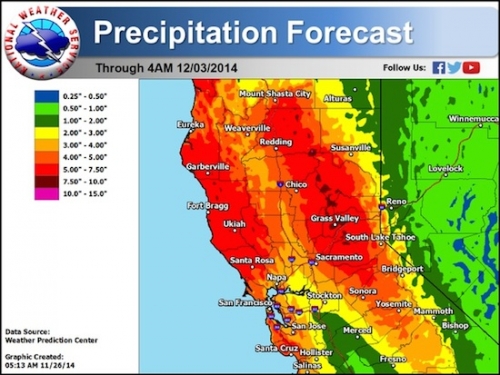 That storm is expected to bring desperately needed rain and snow to parts of California. The state has been mired in a 3-year-long drought that has seen its driest year on record and what is almost certain to be its warmest year on record. Of course, one storm won’t erase such a deep moisture deficit, which has left some communities on the brink of waterlessness. But it’s at least a small step in the right direction, local forecasters and climate scientists say.

“We are looking at this being one of our heaviest storms in quite some time,” David Spector, a meteorologist with the National Weather Service office in Hanford, Calif., said The storm could be the strongest since one in March 2012.

A deep low pressure system is set to move over the West Coast starting on Sunday and lasting through Monday, according to NWS forecasters. The system will bring with it rain at lower elevations, and, more importantly, snow to the Sierra Nevada mountain range.

The Sierra snowpack is a critical part of California’s water system: The snow that falls during the winter wet season melts gradually in the spring, filling the state’s extensive networks of reservoirs.

The past few winters have been disastrously dry, with meager snowpacks and record-low statewide precipitation levels; 2013 was the driest year on record for the state. Record-warm temperatures this year meant that what snow there was melted quickly, instead of trickling into reservoirs into the summer months.

“We have no snow at all below basically 8,000 feet” in the Sierras, Spector said, and very little above it.

With this storm, the mountains should see at least a few inches of snow, and  “it’s very much possible that the higher elevations of Yosemite park will see 2 to 3 feet,” he said.

Such snowfall totals would be extremely welcome to a state that has more than half its area mired in “exceptional” drought, the worst category recognized by the U.S. Drought Monitor. Nearly the entire state is in some level of drought conditions, as has been the case for much of the year. Recently, the northwestern-most corner of the state saw some improvement thanks to recent rains, and this storm should likely lead to some small improvements on the map, Spector said.

But it’s going to take more storms like this to really put the state on the road to recovery with statewide precipitation levels still below normal.

“We need above-average conditions sustained through the winter to alleviate the drought. We hope to see that transition as we get into winter,” California state climatologist Michael Anderson said in an email. 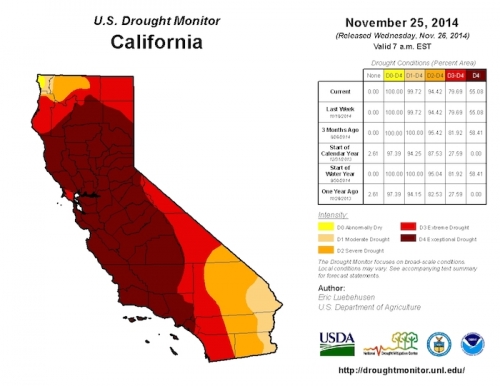 Storms like the one forecast aren’t unusual for this time of year in California, but have been lacking over the past few years, as a ridge of high pressure camped over the West and sent storms on a more northerly track than they would typically take, meaning California missed out on all the moisture. (Some of this storm’s heaviest precipitation is still falling further north, in Oregon and Washington.)

Whether that stubborn ridge, and therefore California’s drought, can be linked to climate change has been a major question that has seen only murky answers. A trio of studies in an annual extreme-weather edition of the Bulletin of the American Meteorological Society published in September came to mixed conclusions. Two of the studies couldn’t find a clear connection, but one found that in climate models, the ridge was more likely to be stuck in place as it was in today’s warmer climate than in the past.

Still, how that likelihood translates into increased chances of drought isn’t clear, the study authors said. However, climate models have suggested that the U.S. Southwest may become increasingly dry in a warming world.

The ridge has also spiked temperatures over California; it's a virtual certainty that this will be the state’s warmest year on record, and by a significant margin.

There are indications that this storm could be the start of some wetter weather for California. The December outlook from the National Oceanic and Atmospheric Administration called for better chances of above-normal precipitation for the whole state, in part because of the El Niño struggling to fully develop in the Pacific Ocean.

“They seem to think that this will continue at least for a little while,” Tom Dang, a meteorologist in the Sacramento NWS office, said. And if nothing else, it’s unlikely California will see a repeat of last winter: “It’s very difficult for it to reach the levels that we reached last winter,” Dang said. “We’re certainly on much better footing” this year than last year.

You May Also Like:
This Is How the U.S. Power Grid Works
Clues Show How Green Electricity May Be in 2050
Earth, Now Available in Ultra High Definition
Packing on the Pounds (of CO2) for Thanksgiving