The idea of a finite “carbon budget” — a key part of the U.N. Intergovernmental Panel on Climate Change’s recent assessment of climate change — have been ignored at the ongoing climate talks in Warsaw, which end on Friday, in favor of what some scientists say are piecemeal emissions cuts that are less likely to solve the problem. 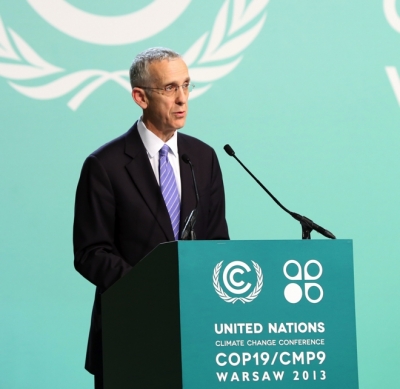 By framing the issue in terms of a carbon budget based around cumulative emissions, the IPCC’s most recent report showed that it doesn’t necessarily matter what short-term emissions reduction targets are adopted, or which country cuts emissions by a particular amount relative to another nation’s pledges. Instead, what’s important is the cumulative emissions of carbon dioxide (CO2) — since a single molecule of CO2 can linger in the atmosphere for as long as 1,000 years — emitted since the dawn of the industrial era.

That framing, however, put the IPCC starkly at odds with the history of global climate negotiations, which have instead focused on near-term emissions reduction targets without agreeing to a long-term emissions goal. Instead, global leaders have agreed to limit warming to, or below, 3.6°F (2°C) relative to preindustrial levels, without specifying how much emissions can take place or how high CO2 levels can go.

The IPCC found that in order to have at least a 66 percent chance of limiting global warming to, or below, 3.6°F (2°C) above pre-industrial levels, no more than 1 trillion tonnes (measured in carbon) of CO2 can be released into the atmosphere from the beginning of the industrial era through the end of this century.

Myles Allen and Dave Frame, who were among the co-authors of a 2009 study in the journal Nature and whose work helped to form the basis for the IPCC’s carbon budget, said their approach provides a clear way of showing the straightforward relationship between the long-term buildup in planet-warming greenhouse gases over time, and particular temperature increases. However, they said it challenges the focus of global climate negotiations since they began in earnest in about 1990.

The IPCC report underscores that the short-term emissions pledges that countries are making in Warsaw don’t necessarily matter, nor does it matter where emissions cuts originate, say in the U.S. or in China, for example. Instead, what matters is limiting the cumulative emissions of CO2 — period.

“The negotiators are not happy with the implications (of focusing on cumulative carbon emissions)” Allen said in an interview. “(But it’s) not the job of the IPCC to make negotiators' lives easy..”

One major implication of the IPCC’s carbon budget, they said, is that developing countries that are set to surpass the industrialized world as the biggest CO2 emitters during the 21st country will need to cut their emissions sooner than currently planned. In the climate talks, developing countries have emphasized the need for the industrialized nations to undertake most of the emissions cuts, with less stringent policies being applied at home.

According to the U.N. Environment Program, there’s a huge gap between the emissions reduction pledges to date and the 3.6°F (2°C) temperature target that countries agreed to in Copenhagen in 2009. If climate change exceeds the temperature target, scientists warn, there is a greater risk that the world’s ice sheets will be destabilized, leading to sharply rising seas, and increasing climate extremes such as droughts, heat waves and floods, which could pose daunting challenges for food and water availability for growing populations. In less likely worst-case scenarios, feedback loops within the climate system could disrupt ocean currents.

“The gap between the scale of global ambitions and the scale of national offerings has been clear to the research community for a long time, but the Kyoto Protocol’s focus on near-term emissions reductions . . . coupled with the scientific focus on long-term stabilization of climate at some unspecified point in the future has long given negotiators an out: they have been able to compare near-term actions without having to square them with long-term goals, rather like guys in a pub arguing about whose round it is while never actually having to settle up the bill,” Frame said in an email.

Global mean surface temperature increase as a function of cumulative total global CO2 emissions from various lines of evidence. All values are given relative to the 1861−1880 base period. Decadal averages are connected by straight lines.
Click image to enlarge. Credit: IPCC Working Group I.

Before the Warsaw talks even got underway, Christiana Figueres, the top U.N. climate official who serves as the executive director of the UN Framework Convention on Climate Change, rejected bringing carbon budgets into the negotiations. “I don't think it's possible,” she told the Guardian in an interview. “Politically it would be very difficult. I don't know who would hold the pen (in setting out allocations of future budgets).”

Figueres’ stance is noteworthy considering that the IPCC’s charter tasks the group with providing regular updates on the state of climate science in order to inform policy makers and the public, which includes the UNFCCC process.

According to a new study co-authored by Allen and published Thursday in Nature Climate Change, the eventual peak level of warming that the planet will see from greenhouse gas emissions is going up at 2 percent per year, much faster than actual temperatures are increasing. That helps to illustrate the urgency of reducing emissions, Allen said.

“Basically we've both long thought that the cumulative emissions work is policy-relevant . . . and the fact that negotiators are squealing means we're probably right about that,” Frame said in an email conversation. “I gather some international relations heavyweights think this is unconstructive; I hear where they're coming from. But at the same time, I think it's great that (the) IPCC can so clearly show that the commitments we make as nations don't look anything like the collective goal we set ourselves.”

The IPCC report estimated that we’ve already used 515 billion tonnes of the carbon budget as of 2011 by burning fossil fuels for energy as well as by clearing forests for farming and myriad other uses. That means we’re on the wrong side of the budget, with 485 billion tonnes of carbon left.

According to the 2009 Nature study, burning all proven and economically recoverable fossil fuel reserves — never mind other potential new fossil fuel discoveries — would pump another 763 billion tonnes of carbon into the atmosphere. That would be enough to exceed the carbon budget and, most likely, set the globe on track to sail past the temperature target.

What’s worse is that the budget may even be smaller since emissions other than CO2 also contribute to global warming. Factoring in some of these shorter-lived climate pollutants, such as nitrogen oxide and soot, brings the overall cumulative budget down from 1 trillion tonnes of carbon (as CO2) to about 790 billion tonnes.

With that in mind, the remaining budget is even smaller, leaving just 275 billion tonnes of carbon left. To stay within the budget, global emissions would have to peak by 2020, and then become negative—with more CO2 being taken out of the atmosphere by plants and the oceans than is put into the air each year — by 2090.

In a speech before the World Coal Association, which also held a conference in Warsaw this week, Figueres did take a hard line that squares with the IPCC’s carbon budget when she told coal industry representatives that they will need to leave most coal reserves in the ground unless the industry comes up with ways to capture and store CO2 at every operational plant.

“These are not marginal or trivial changes, these are transformations that go to the core of the coal industry,” she said.

Editor's Note: This article has been updated to include the carbon budget revisions issued by the IPCC on Nov. 11, 2013.