The 5 Most Sobering Charts from the IPCC Climate Report

The first installment in the U.N. Intergovernmental Panel on Climate Change’s latest scientific assessment on climate science came out on Friday, and it’s loaded with dense terminology, expressions of uncertainty, and nearly impenetrable graphics.

But we'll make it simple for you. Here’s what you need to know, in number and chart form. 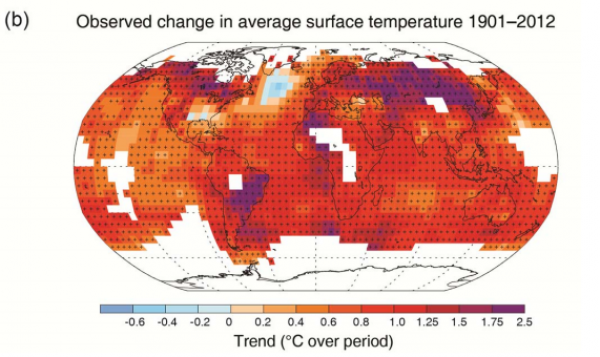 0.54°F to 8.64°F: How high global average surface temperatures are likely to climb by 2081-2100 relative to 1986-2005 levels, depending on future amounts of greenhouse gases in the air. The report found that the global mean surface temperature change by 2100 is likely to exceed 2.7°F relative to the period betwen 1850-1900 in all but one of the emissions scenarios. 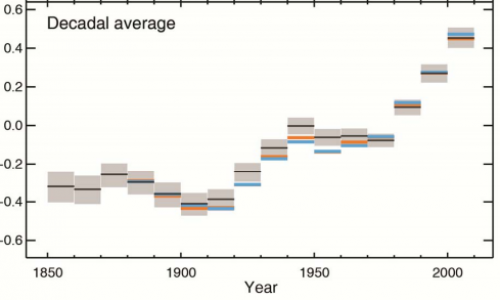 10.2 to 32 inches: How much mean global sea level is projected to increase by 2081-2100. The scenario with the highest amounts of greenhouse gases in the atmosphere shows a mean sea level rise range between 21 and 38.2 inches, which would be devastating for numerous highly populated coastal cities at or near current sea levels, from New York to Hong Kong. 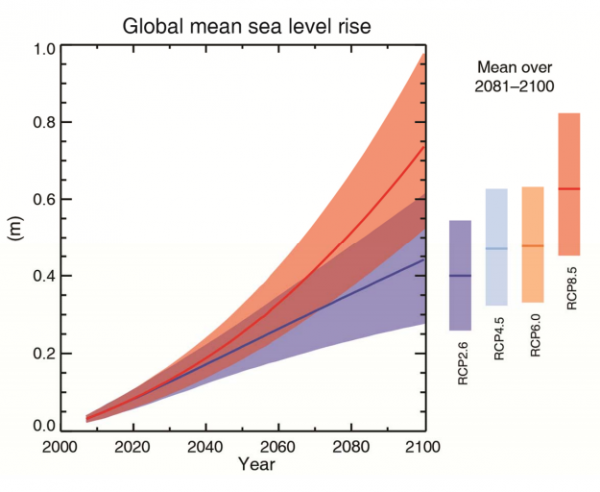 Projections of global mean sea level rise over the 21st century relative to 1986–2005 from the combination of the computer models with process-based models, for greenhouse gas concentration scenarios. The assessed likely range is shown as a shaded band. The assessed likely ranges for the mean over the period 2081–2100 for all scenarios are given as coloured vertical bars, with the corresponding median value given as a horizontal line.
Credit: IPCC Working Group I.

By comparison, the previous IPCC report in 2007 projected a global sea level rise of .7.1 to 23.2 inches by 2100, but it did not include the influence of rapid melting of the Greenland ice sheet as well as portions of Antarctica because not enough information was known at the time.

The report found that the rate of sea level rise is accelerating as the oceans expand as they warm, and global ice sheets melt.

3.5 to 4.1 percent per decade: Annual mean Arctic sea ice extent rate of decline during 1979-2012. The report found that there is “medium confidence” that Arctic summer sea ice retreat and sea surface temperatures during the past 30 years were unusually high in the context of at least the past 1,450 years.

90 percent: Amount of the extra energy in the Earth’s climate system that is going into the oceans, where it is being stored, eventually to manifest itself in warming air temperatures.

11.7 percent per decade: The rate of decline in June snow cover in the Northern Hemisphere during the 1967-2012 period. 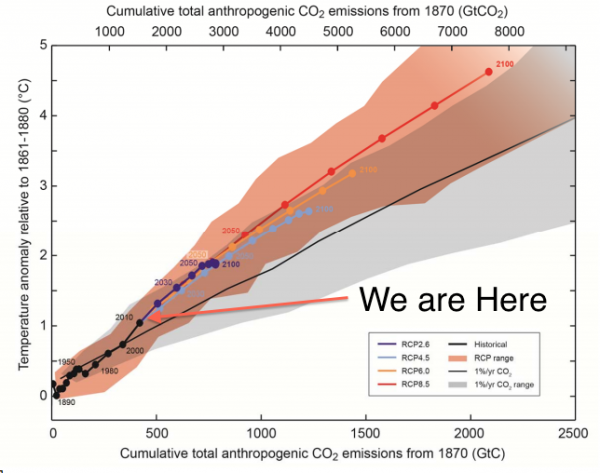 Global mean surface temperature increase as a function of cumulative total global CO2 emissions from various lines of evidence. Multi-model results from a hierarchy of climate-carbon cycle models for each RCP until 2100 are shown with coloured lines and decadal means (dots). Some decadal means are indicated for clarity (e.g., 2050 indicating the decade 2041−2050). Model results over the historical period (1860–2010) are indicated in black. The colored plume illustrates the multi-model spread over the four RCP scenarios and fades with the decreasing number of available models in RCP8.5. The multi-model mean and range simulated by CMIP5 models, forced by a CO2 increase of 1% per year (1% per year CO2 simulations), is given by the thin black line and grey area. For a specific amount of cumulative CO2 emissions, the 1% per year CO2 simulations exhibit lower warming than those driven by RCPs, which include additional non-CO2 drivers. All values are given relative to the 1861−1880 base period. Decadal averages are connected by straight lines.
Credit: IPCC Working Group I.

Because CO2 has such a long atmospheric lifetime, with some molecules lingering in the atmosphere for hundreds of years, scientists have to take into account the cumulative total of CO2 emissions in order to project future warming.

This graphic shows cumulative CO2 emissions and the likely temperature changes associated with them based on the IPCC’s four greenhouse gas concentration scenarios. The bottom line is that holding global warming to at or below 3.6°F is going to be incredibly difficult. The report found that to have at least a 66 percent chance of holding warming to below that threshold will require cumulative CO2 missions from all manmade sources to stay below 1 trillion metric tons of carbon since 1861.