Trees may provide the Earth with a little shade from global warming – indirectly. European and Canadian researchers report that they have found what engineers like to call a negative feedback loop above the forests of Europe and North America.

It works like this. Trees – those natural chemical factories that routinely deliver complex aromatic compounds such as rubber, coffee, chocolate, resins, pungent fruits, oils and natural drugs such as quinines – are a permanent source of volatile organic compounds released into the atmosphere. 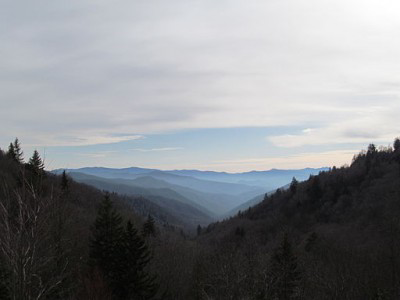 The Smoky Mountains of Tennessee and North Carolina take their name from the pall of isoprenes discharged from the oaks that cover the hills: the mountains actually look smoky.
Credit: John Phelan

On a hot day, trees release even more conspicuous quantities of terpenes, isoprenes and other compounds into the air. These are wafted higher in the atmosphere and begin to mix, oxidize, or chemically react with other atmospheric gases, aerosols and car and factory exhausts to form increasingly larger particles on which water vapor might condense.

This is not a new observation. The Smoky Mountains of Tennessee and North Carolina take their name from the pall of isoprenes discharged from the oaks that cover the hills: the mountains actually look smoky.

The aerosols from trees float in the atmosphere and reflect and scatter sunlight and even form cloud droplets. So far, so familiar.

But Pauli Paasonen, of the University of Helsinki and the International Institute for Applied Systems Analysis in Laxenburg, Austria, writes in Nature Climate Change that he and 23 colleagues in Finland, Sweden, Germany, Canada and the U.S. decided to assess the overall effect of these aerosols and their contribution to, or impact upon, global warming.

They analyzed data from eleven measuring stations spread across the northern hemisphere, from semi-Arctic wilderness to polluted agricultural lands, and worked out how the quantities of cloud condensation nuclei might be linked to air temperatures.

They found a clear connection. The warmer the weather, the greater the likelihood that gas emissions from plants would create conditions for the formation of clouds, which in turn would reflect more sunlight back into space, and thus help damp down global warming. 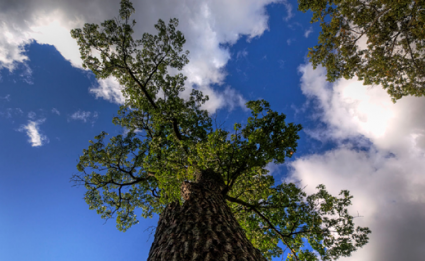 The warmer the weather, the more likely gas emissions from plants would create conditions for the formation of clouds, which would reflect more sunlight back into space, thus help damp down global warming.
Credit: flickr/Grant MacDonald

That is the good news. The not-so-good news is that these plant gas emissions won’t make a great deal of difference – on a global scale they might counter about 1 percent of global warming.

On a regional scale, however, the effect might be much greater: in heavily forested areas – Finland, Siberia and Canada, for instance – where human emissions of aerosols are anyway relatively slight, plant gas releases might counter as much as 30 percent of warming.

The effect however was not easy to predict, and may not be easy to confirm. The key variable is the boundary layer of the atmosphere at which gases and particles mix and form the nuclei around which cloud droplets might condense, and the height of this boundary changes with weather conditions.

“Plants, by reacting to changes in temperature, also moderate these changes”, says Dr Paasonen. “One of the reasons that this phenomenon was not discovered earlier was because these estimates for boundary layer height are very difficult to do.”