Catastrophic wildfires in the Western U.S. are often discussed in superlatives these days, with blazes burning land more violently and more frequently in recent years than at any point on record. Those changes are considered partly driven by global warming, and a new University of Wyoming study shows that even the smallest increase in average temperature —  0.5°C (0.9°F)  —  could bring a dramatic increase in wildfire activity at higher elevations.

The study also suggests that global warming may be ushering in an era of high-elevation wildfires unlike any seen in more than 1,000 years. 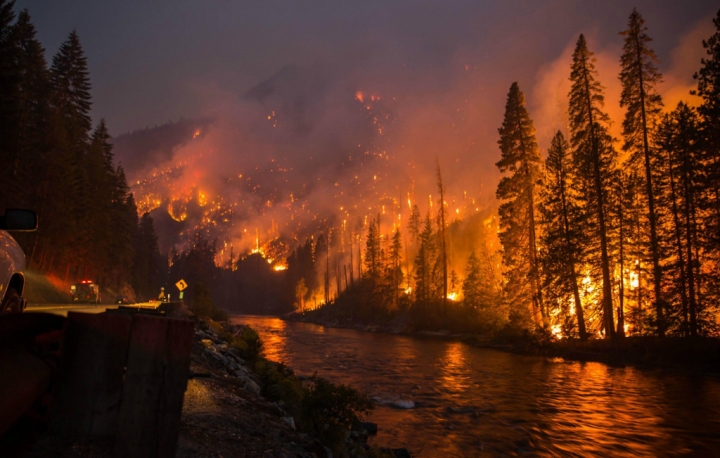 The Chiwaukum Fire in Washington State in 2014.
Credit: Washington DNR/flickr

The connection between catastrophic wildfires and climate change has been major news this year as record-breaking drought and withering heat have helped fuel more than 50,000 wildfires. Those blazes have scorched more than 9 million acres in the West and Alaska in 2015 — more land burned than at any point since 2006.

Warming in Alaska, where average temperatures have risen by 3°F in the last 50 years, is a prime suspect for huge wildfires there this year, while in the Lower 48, studies show that for every 1°C (1.8°F) of warming, the size of the area burned by wildfire in the West could quadruple.

The new study, published Monday in the Proceedings of the National Academy of Sciences, provides more evidence that even a small amount of warming has a huge effect on wildfire.

University of Wyoming researchers studied charcoal samples representing 2,000 years of wildfire that were taken from lake beds in a subalpine forest — above 8,000 feet — in northern Colorado’s Mount Zirkel Wilderness near Steamboat Springs. With them, they were able to measure the increased wildfire frequency during a period of global warming similar to today.

That period, called the Medieval Climate Anomaly, or MCA, was about 1,100 to 1,200 years ago, when average temperatures in Northern Colorado were 0.5°C warmer than they were the preceding century, but moisture levels were not dramatically different.

The study is the first to discover how much land across an entire mountain range burned over a period of 2,000 years and shows that large wildfires similar to those burning today only occurred when temperatures increased like they have in recent years, the study’s lead author, University of Wyoming Ph.D. candidate John Calder, said.

“When we look into the past for evidence of these large wildfires we only see them one time when temperatures rose about 1°F,” he said. “Our study then adds more evidence that the recent increase in large wildfires is related to climate change because the only time we see these types of large wildfires in the last 2,000 years is when we had a similar amount of warming.”

The study only applies to dense high elevation forests, not those that have burned at lower elevations elsewhere in Colorado.

Scientists not associated with the study say that it shows that the West may be on the cusp of a new era of catastrophic wildfire at high elevations, where severe fires typically burn less often because of cooler temperatures and greater moisture.

Tania Schoennagel, a research scientist at the University of Colorado’s Institute of Arctic and Alpine Research, said the study provides two new insights into the connection between wildfire and climate change.

“While we generally expect warming temperatures and associated drought to increase wildfire activity, we don’t have a good calibration for what to expect with current (and) future warming,” she said. “The MCA is a good analog for recent warming, and a larger proportion of the study area burned during the beginning of the MCA than we have witnessed recently in similar subalpine landscapes. The authors suggest, therefore, that we can expect large areas of subalpine forests, which are climate-sensitive and fuel-laden, to burn in the coming decades.” 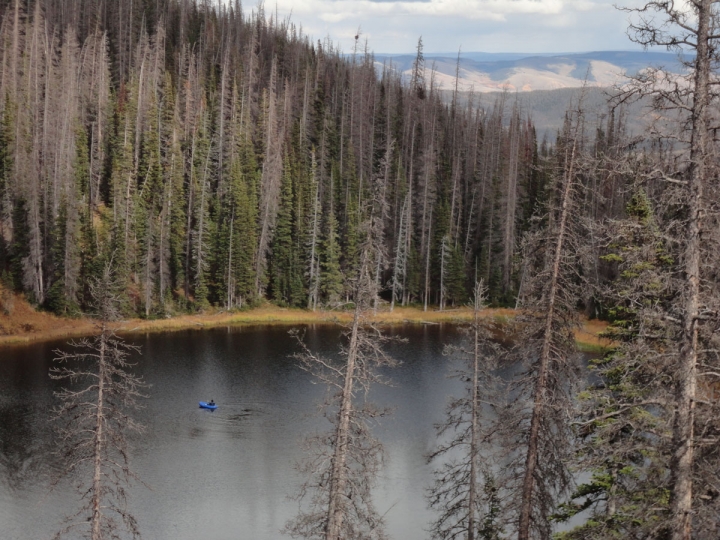 University of Wyoming scientist John Calder surveys Lake Eileen in Northern Colorado before taking a sediment core from the bottom of the lake.
Credit: John Calder

The second insight, she said, is that wildfire activity can decrease even in warmer temperatures. The study doesn’t directly say why that happened a millennium ago, but suggests that burned forests didn’t regenerate during the warm period.

Thomas Veblen, a University of Colorado geography professor, said the study is significant because of its discovery that wildfire activity increased during a warmer period but without an obvious decrease in precipitation. “This is an important finding because the increase in wildfire activity is associated with a rise in temperature,” he said.

Park Williams, an assistant research professor of biology and the paleoenvironment at Columbia University’s Lamont-Doherty Earth Observatory, said this year’s big fires in the West have corresponded to temperatures higher than anyone there has seen in hundreds of years.

“Many studies have suggested that this is not a coincidence,” Williams said. “Warming promotes wildfire as long as there are adequate fuels and ignition sources. This study provides some independent evidence from a warm period hundreds of years ago that support that hypothesis.”

Both Calder and Schoennagel said that it would be inaccurate to make a direct connection between this study and the wildfires burning today in California because they involve different forest types.

“However, the regional trends in wildfire across the West this year reflect the study’s findings of wildfire increases in response to warming,” Schoennagel said. “We should expect more of the same to come.”

You May Also Like:
The Grand Canyon From the Stratosphere is Amazing