It has become increasingly clear in recent years that ocean waters are eating away at the undersides of the ice shelves that fringe Antarctica and buttress its many glaciers. A new study released Tuesday has found that hundreds of feet of ice have been lost from the bottoms of a few of these ice shelves and glaciers in a region of the continent that is contributing the most to sea level rise.

Moving the bar shows the retreat of the grounding line of the Smith Glacier from 1996 (left) to 2011 (right).
Credit: NASA

The glacier that saw the most melt, Smith, lost about 1,000 feet of ice between 2002 and 2009, a stunning amount. The authors think this melt is “a strong piece of evidence” that these glaciers, along with the larger Amundsen region, were subjected to a large influx of warm ocean water during that period.

That influx could be due to changes in ocean circulation related to other changes wrought by climate change, but is still something scientists are avidly investigating.

The research, presented in the journal Nature Communications, underscores how the interplay between ocean waters and the shape of the seafloor and bedrock that sit below the ice are driving melt. Understanding how those factors interact will help researchers better predict the future potential sea level rise contributions from these glaciers.

Glaciers are essentially slow-moving rivers of ice that flow from the interior of Antarctica out to the coast. When they reach the continent’s edge, the ice begins to float on the ocean water — this floating section is called an ice shelf, and it acts like a doorstop for the glacier behind it, regulating the speed of its flow.

Ice in contact with ocean water naturally melts, but is replaced as the glacier brings new ice. The problem comes when the melt outpaces the replenishment; rapid thinning of ice shelves causes the glaciers to speed up and puts more once land-bound ice to the ocean, raising sea levels.

Since 1900, human-driven global warming has caused sea levels to rise by about 6 inches. The Amundsen Sea Embayment alone has contributed about 10 percent of that rise.

Ocean water-driven melt also pushes back the grounding line of ice shelves, or the point at which the land-bound glacier begins to float. This melt exposes more of the underside of the glacier to melt.

Several recent studies have pointed to the substantial ice loss in the Amundsen area — some glaciers, such as the large Pine Island and Thwaites glaciers, may have even reached the point where their retreat is unstoppable.

While most attention has been paid to these major glaciers, the fastest grounding line retreat was actually happening at the Dotson and Crosson ice shelves, fed by the Smith, Pope and Kohler glaciers, study author Ala Khazendar, of NASA’s Jet Propulsion Laboratory, found.

Khazendar and his colleagues used radar surveys of the glaciers conducted by NASA’s airborne Operation IceBridge to determine how much melting had occurred on the undersides of the ice shelves and glaciers.

They found that the ice shelves lost about 40 feet of ice per year from 2002 to 2009 and that the Smith glacier, the fastest-melting of the three, lost between about 980 and 1,600 feet over that period, or about 230 feet per year. 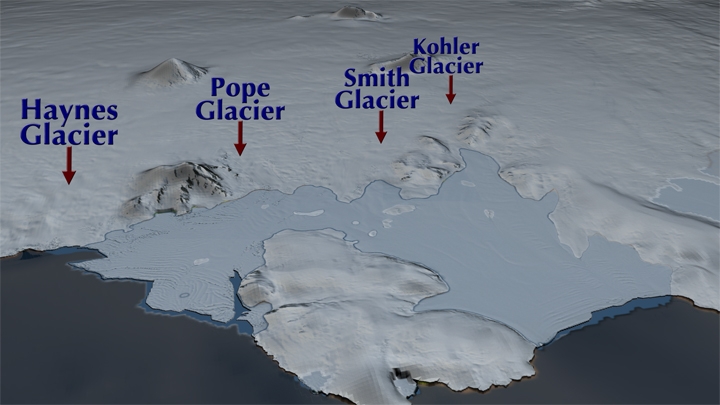 The Pope, Smith and Kohler glaciers flowing into the Crosson and Dotson ice shelves, which are colored bluish-white.
Credit: NASA

“The ice is being lost at such a rate that the glacier feeding the ice shelf cannot replenish it quickly enough,” Khazendar said. “I was really struck by how high the loss is.”

Ian Joughin, who studies glaciers at the University of Washington and wasn’t involved with the study, said that while the research showed “strong melting” had occurred, it wasn’t clear that sudden influx was the culprit. It’s possible that something else triggered the grounding line retreat and set off a cycle of melt and further retreat. Likely, Joughin and Khazendar said, it was some mixture of these processes, varying from glacier to glacier.

After 2009, the Pope and Kohler glaciers appeared to stabilize, while Smith continued to retreat. Khazendar said Smith’s more substantial melt and retreat is in part because the bedrock below the glacier slopes downward moving inland, meaning it is easier for ocean waters to slosh in and melt away more ice.

The team is hoping to confirm that these trends have indeed continued when they look at new radar surveys that this year’s Operation IceBridge mission to Antarctica is conducting.

“As you can imagine, we cannot wait to have our hands on this dataset,” Khazendar said.

The study further shows, he said, how important it is to understand both the ocean circulation and the topography of the seabed to figure out how much these and other glaciers might melt in the future and therefore how much sea level rise is in store.