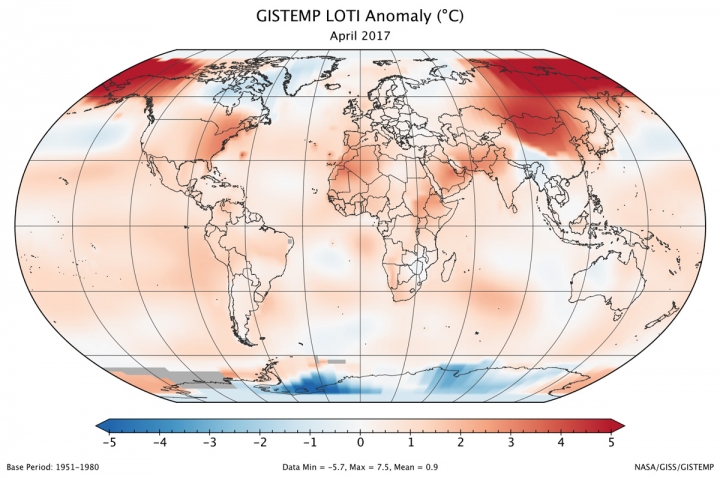 Temperatures were well above average globally in April, with the biggest temperature anomalies in the Arctic.
Credit: NASA GISS

The warm global average last month was heavily influenced by a continuation of unusually high temperatures in the Arctic. The Arctic warmth has been linked to record low levels of sea ice and to the variability of weather, including northward-moving storms that have brought heat with them.

“If it’s just natural variability, it’s a type of natural variability I am not familiar with,” said Mark Serreze, director of the National Snow and Ice Data Center. “There’s a lot going on here and I think there’s some catchup to do in the research community.”

Temperatures were also well above average in the Eastern U.S., China and across Africa. Only a few patches of the globe were cooler.

The Arctic is warming faster than other regions as greenhouse gas pollution traps heat. The average Arctic temperature last year was 6.3°F (3.5°C) higher than in 1900. Temperatures elsewhere are rising by about a quarter of that rate. 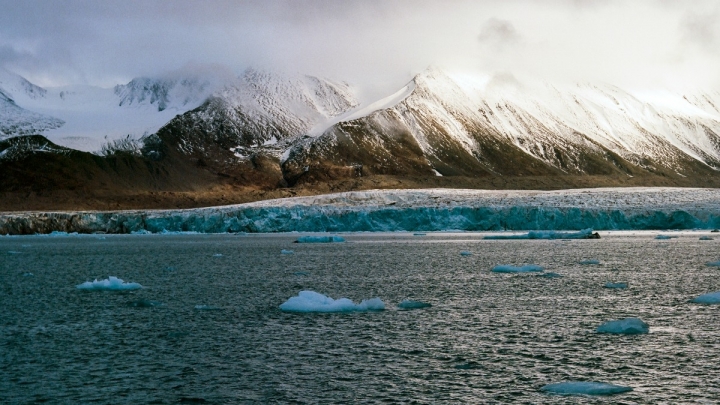 The rapid changes underway in the Arctic are partly caused by the disappearance of sea ice, which causes more light and heat to be absorbed at the ocean’s surface during sunny months instead of being reflected into space.

A longtime decline of summertime Arctic sea ice has spilled over during the past two years to also affect winter months. During dark and cold months, the sea ice acts like an insulating cap that slows the release of ocean heat into the air.

“The changes are becoming more noticeable in the winter as well, and that’s leading to a different sort of feedback,” said Kent Moore, a University of Toronto physics professor who’s currently chair in Arctic studies at the University of Washington. “Now I think we’re seeing a feedback that involves less sea ice that allows more heat to be transported into the atmosphere.”

Temperature and sea ice changes in the Arctic can affect wildlife and open up new areas for oil drilling and shipping — both industries that can have heavy climate impacts. The changes also appear to affect the weather in the U.S. and in other parts of the world, including by causing cold snaps.

Climate data from this crucial region and from Antarctica is more limited than for other areas. That can make the causes and consequences of recent changes in the frigid regions difficult for scientists to decipher.

The World Meteorological Organization on Monday said it had “kicked off” a two-year science blitz called the ‘Year of Polar Prediction,’ which aims to deploy new instruments to help close research gaps and improve the accuracy of weather predictions.

“The poles influence weather and climate conditions in lower latitudes where hundreds of millions of people live,” the United Nations body’s Petteri Taalas said in the statement.