Here’s How Much U.S. Summers Have Warmed Since 1970

June is here, so let the great debate over the Song of the Summer begin! Will this summer’s earworm come from a pop stalwart like Katy Perry or a newcomer like Iggy Azalea? Radio and Spotify listeners around the country will decide. One summer trend that’s not up for debate, though: the season has been getting hotter across the U.S. since 1970. 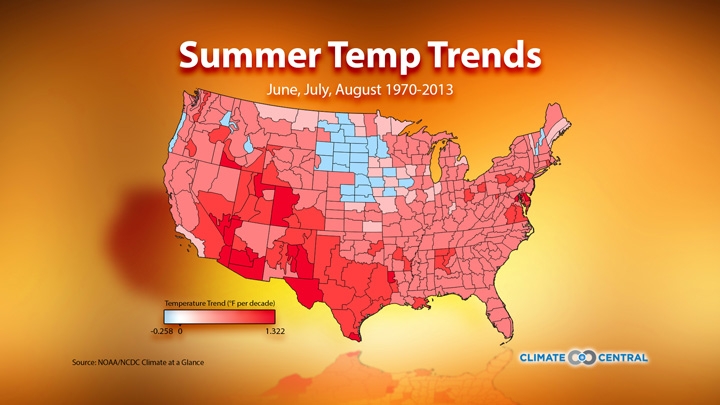 A map showing summer temperature trends in the U.S. since 1970.

Nationwide, the summer warming trend averages out to a little more than 0.4°F per decade since 1970. The places warming the fastest also happen to be some of the hottest places in the country, with a large chunk of the Southwest and all of Texas warming more than 1°F per decade.

The notable blue spot in a sea of red is the Upper Midwest, where substantial parts of Iowa and the Dakotas have seen a slight cooling trend since 1970. Interestingly, that region is actually home to some of the fastest-warming states when you look at the change in annual average temperatures. Winters in particular have warmed dramatically there over the past 40 years.

Of the 344 climate divisions, which are set by the National Climatic Data Center and divide the country into climatically-similar zones, less than 10 percent have seen a summer cooling trend. In general, every state in the lower 48 has warmed since 1970 and  the most recent decade was the warmest on record for the country. Those trends are consistent with the overall warming that has been observed for the planet as greenhouse gases emitted by humans build up in the atmosphere.

For this summer, the Climate Prediction Center (CPC) is forecasting a large “U” of areas where above normal temperatures are more likely running from down the West Coast across the South and back up the Eastern Seaboard. CPC also forecasts below normal temperatures are likely in the Upper Midwest based overarching climate conditions. While El Niño is likely to form this summer, it's impacts on weather patterns in the U.S. don't generally become pronounced until fall.

You may now return to debating the merits of “Fancy.”