Bitter cold and snow and ice storms have been the mantra for December across much of the U.S. And in fact, the country has seen a larger snowpack this month than at any point in the past decade.

According to the National Oceanic and Atmospheric Administration (NOAA), 53 percent of the lower 48 states had some snow cover on Dec. 15. That topped all readings on that date since such records began in 2003. 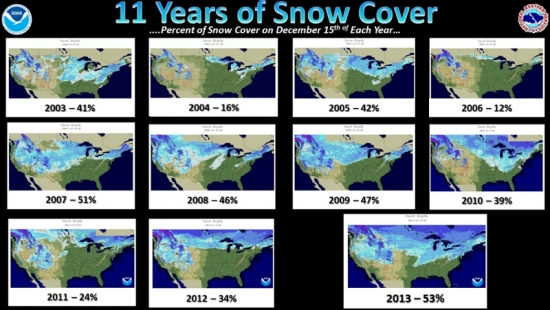 Snow cover on December 15, 2013 was the largest seen on that date in at least 11 years.
Click image to enlarge. Credit: NWS via Twitter.

The expansive snow cover stands in stark contrast to some of the milder early winters of recent years, including 2006, when just 12 percent of the lower 48 states were covered in snow on December 15.

An unusual weather pattern that brought bitterly cold Arctic air to the U.S. has been the driving force for the early season snow. It started in late November and has lasted through much of December, all the while sending record-breaking warmth into Alaska.

Snowstorms have painted the nation white since late November, dumping several feet of snow in the Rocky Mountains, and lesser amounts in the Great Plains, the Mississippi River Valley, the Ohio River Valley, Appalachians, and the Mid-Atlantic and Northeast.

In addition to the snow, the U.S. has seen its share of record-cold temperatures, too. With the noteworthy exception of Alaska, nearly every state was affected by the unusually cold air at some point during the November-to-December timeframe, with temperatures dipping down to at least minus-43°F in Montana on Dec. 8, and running 10 to 20°F below average elsewhere.

There has been a sharp imbalance in the number of record high and low temperatures set or tied. In November, for example, the U.S. saw three times as many record cold daily highs and lows as record warm daily highs and lows (2,238 cold temperature records vs.  749 warm records). For the year, daily record lows are likely to outnumber daily record highs in the U.S. for the first time in 20 years. 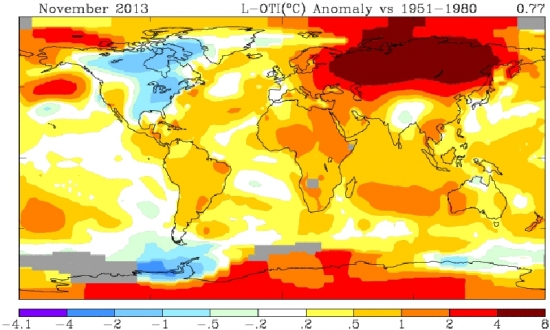 Globally, November was the warmest such month on record in NASA's dataset, which goes back to 1880.
Click image to enlarge. Credit: NASA.

In November, the continental U.S. had an average monthly temperature that was 0.3°F below the 20th century average, which did not stand out as particularly cold in NOAA’s 119-year instrument record, but was noteworthy considering that most months in the U.S. in recent years have been milder than average. The November snow cover extent across the lower 48 states was the 12th largest in the nearly 50-year period of record, running about 116,000 square miles above average, according to the Rutgers University Snow Lab.

But while the U.S. has shivered through the start to winter, the rest of the world was unusually mild during November. According to NASA, November was the warmest such month on record worldwide since reliable instrument temperature data began being collected in 1880. The top 10 warmest Novembers in NASA’s dataset have all occurred since 2001.

November continued the planet’s unbroken streak of warmer-than-average months that has lasted since the Ford administration. And with increasing man-made emissions of greenhouse gases, there is no reason to think that streak will end anytime soon.

Related Content
For the First Time in 20 Years, Cold Records May Beat Warm
Arctic Blast Has Half the Lower 48 States in Its Icy Grip
While Most of U.S. Froze, Parts of Alaska Had Record Highs
Snow Cover May Help Usher in Historic Cold to Northwest
New Study Adds to Global Warming, Extreme Weather Debate