Heat waves pose major health and economic problems in the U.S. and around the world. In 2012, a heat wave baked the U.S., shattering temperature records, causing 82 deaths, and withering crops across the country. Improved forecasts with longer lead times could be an asset to emergency managers, farmers, and others who suffer the worst impacts from heat waves. New research holds some promise of being able to predict them up to 20 days in advance across the U.S. by monitoring weather patterns.

The new research builds on the work of Carl Gustav-Arvid Rossby, a giant in the field of meteorology. In the mid-20th century, Rossby studied the perturbations in the jet stream as air moves from west-to-east above the Northern Hemisphere. A math and physics whiz who landed on the cover of Time Magazine in 1956, his work unlocked the secrets of how the jet stream can become contorted into deep dives, or troughs, and large ridges, and how these waves move slowly around the world. 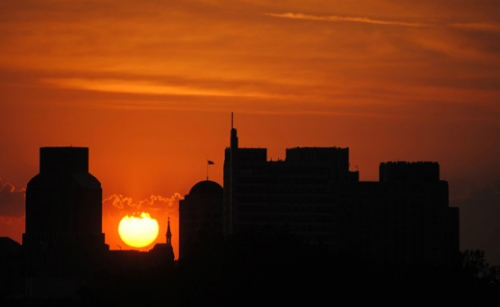 New research offers the promise of forecasting heat waves in the U.S. up to 20 days in advance.
Credit: Wikimedia Commons

Now, using Rossby’s insights and the tools of modern meteorology, a research group has made headway toward an elusive goal: predicting the probability of extreme events (in this case, heat waves) two to three weeks in advance.

The study, published in the journal Nature Geoscience on Sunday, shows that long-lasting, intense heat waves in the U.S. — which are becoming more common and severe due to manmade global warming — tend to be preceded by a particular jet stream configuration. By looking for these patterns, weather forecasters could improve their chances of accurately predicting extreme heat events, which are among Mother Nature’s deadliest weather hazards, beyond the traditional 10-day limit of current weather forecasting techniques. 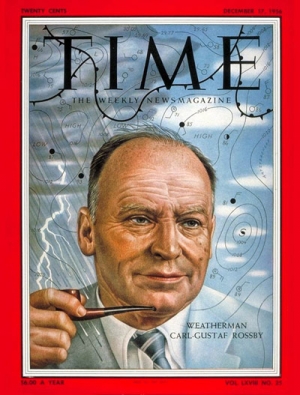 Time Magazine cover in 1956 featuring Carl Gustav Rossby, a pioneer in the study of the atmosphere.
Credit: Time.com

Extensive research has shown that manmade global warming is already exacerbating extreme heat events. The new study does not contradict this past research since it looked only at the predictability of such events, not the role played by increasing average temperatures that make a typical heat wave today more severe than similar events a half-century ago.

For the study, researchers from the National Center for Atmospheric Research (NCAR) in Boulder, Colo. used a computer model to simulate 12,000 years of summertime weather over the Northern Hemisphere. The study analyzed nearly 6,000 simulated heat waves that met the study's criteria, and found that heat waves were more likely to build over the U.S. when a specific pattern of Rossby waves appeared. Rossby waves are large meanders in high-altitude winds that have a significant influence on the weather.

When a “wavenumber-5” pattern of Rossby waves — the presence of five persistent waves of low pressure and high pressure areas in the upper atmosphere around the northern hemisphere — appeared, a major summertime heat wave was more likely to build over the U.S. about 15 to 20 days later.

In some cases, the probability of a heat wave was more than quadruple what would be expected by random chance alone.

This distinctive pattern, with a high pressure ridge near the Aleutian Islands of Alaska, a trough over the Western U.S., and another high pressure ridge closer to the East Coast, can favor slow-moving weather features, raising the odds of prolonged heat waves.

During the nearly 3 weeks leading up to a heat wave, the five ridges and five troughs that make up a wavenumber-5 pattern migrated slowly westward around the globe, moving against the west-to-east airflow of the jet stream itself — a behavior that Rossby helped to explain. Eventually, models showed that an area of high pressure at the upper levels of the atmosphere would move from the North Atlantic into the United States, reducing rainfall and increasing temperatures.

The researchers found hints that the association between heat waves and this jet stream configuration was true in observations of modern data going back to 1948, but there were too few events meeting the study criteria to draw firm conclusions from the observations, said lead author Haiyan Teng of NCAR.

In identifying this configuration, the researchers acted in a similar way to doctors seeking out specific genetic markers that can indicate that a patient will be more likely to develop a particular disease.

In an interview, Teng called the findings “just a little tiny step” toward the development of an early warning system for heat waves, but said the findings are particularly significant because they show that extreme heat events in the U.S. are not necessarily driven by slowly-evolving conditions in the tropics, like El Niño or La Niña events or the South Asia Monsoon, which other studies have looked to as possible sources of predictability.

Instead, the study found, random variability in midlatitude weather patterns may be responsible for setting up the necessary conditions for extreme heat events.

Stephen Bennett, the president and founder of EarthRisk Technologies in San Diego, a firm that forecasts the long-term risk of extreme temperature events (both hot and cold) for the energy industry, said the new study contains “exciting results” that agree with the company’s own findings. 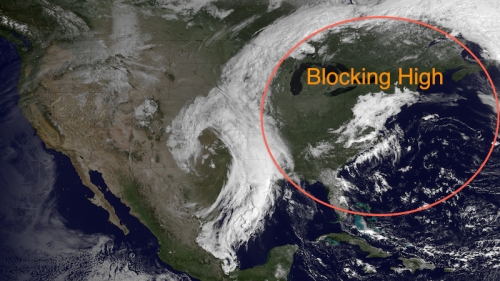 A blocking pattern in the jet stream set up conditions for a historic U.S. heat wave in March 2012.
Credit: NOAA

“Teng’s work is fantastic in that it quantifies some of these relationships using a much larger dataset than observational data will allow,” Bennett said in an email. “While the physical explanation remains elusive… it’s important to note that the atmospheric patterns in-and-of themselves can be used as aids for prediction.”

Mingfang Ting, a researcher at Columbia University’s Lamont-Doherty Earth Observatory in New York who was not involved with the new study, said the study is important because it provides a potential way to eliminate a forecasting dead zone that exists between two timescales, the short-term out to ten days, which is handled well by current weather models, and seasonal forecasting that looks more at long-term average temperatures over the course of a few months. “The time scales in between these two prove to be challenging to predict,” she said in an email.

Separate research has suggested that rapid Arctic climate change may be slowing down the jet stream in the northern midlatitudes, leading to slower-moving Rossby waves, which would favor more frequent stuck weather patterns that can lead to heat waves, droughts, and other extreme weather and climate events. This study did not examine the potential Arctic connection.