Cities are almost always hotter than the surrounding rural area but global warming takes that heat and makes it worse. In the future, this combination of urbanization and climate change could raise urban temperatures to levels that threaten human health, strain energy resources, and compromise economic productivity.

Summers in the U.S. have been warming since 1970. But on average across the country cities are even hotter, and have been getting hotter faster than adjacent rural areas. (report continues below interactive)

With more than 80 percent of Americans living in cities, these urban heat islands — combined with rising temperatures caused by increasing heat-trapping greenhouse gas emissions — can have serious health effects for hundreds of millions of people during the hottest months of the year.  Heat is the No.1 weather-related killer in the U.S., and the hottest days, particularly days over 90°F, are associated with dangerous ozone pollution levels that can trigger asthma attacks, heart attacks, and other serious health impacts.

Our analysis of summer temperatures in 60 of the largest U.S. cities found that:

Urban heat islands are even more intense at night. Over the past 10 years, average summer overnight temperatures were more than 4°F hotter in cities than surrounding rural areas. 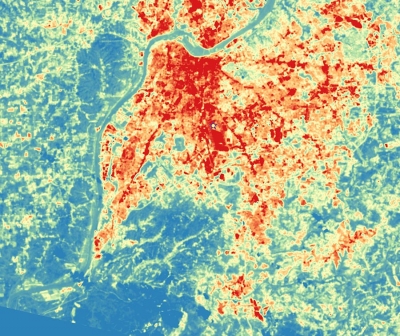 Several independent studies have shown that urban heat islands (in the U.S., and around the world) do not bias global warming measurements, ruling out the possibility that rising global temperatures have been caused by urbanization alone.

Research suggests that urban planning and design that incorporates more trees and parks, white roofs, and alternative materials for urban infrastructure can help reduce the effects of urban heat islands.