Antarctica is unfreezing. In the past few months alone, researchers have chronicled a seasonal waterfall, widespread networks of rivers and melt ponds and an iceberg the size of Delaware on the brink of breaking away from the thawing landscape.

A new study published in Nature Communications only adds to the disturbing trend of change afoot in Antarctica. Researchers have documented rain on a continent more known for snow and widespread surface melt in West Antarctica last summer, one of the most unstable parts of a continent that’s already being eaten away by warm waters below the ice.

The findings, published Thursday, indicate that last year’s super El Niño played a large role in driving the meltdown, but researchers are concerned that overlaying natural climate patterns onto the long-term warming driven by carbon pollution could put Antarctica’s ice in an even more precarious position.

“There’s a substantial loss of ice going on from warm water eating away at the bottom of some critical ice shelves,” David Bromwich, a climate modeler at Ohio State, said. “If we move into the future and we’ve got a lot of melting from the top as well, that means things would proceed even faster. It’s not a good prescription.”

The research, which Bromwich helped produced, stemmed from a series of coincidences starting at the top of the West Antarctic ice sheet, nearly 6,000 feet above sea level. Researchers stationed there in January 2016 noticed surface melt starting in the middle of the month and even reported seeing rain as warm, moist air poured into the region.

Bromwich said he had never heard of rain falling on that region of the ice sheet, though the Antarctic Peninsula further north will occasionally get a few showers. His and other researchers’ curiosity was piqued and using satellite imagery and high altitude balloon data, they were able to confirm the melt not just at the top of the ice sheet but across much of West Antarctica.

About 300,000 square miles of the ice sheet near the Ross Sea experienced melt, making it the second-largest surface melt ever documented in that region of Antarctica. The meltdown was caused by incredibly mild air. Temperatures spiked 27°F (15°C) above where they were at in early January in some locations, pushing them above freezing for a two-week period at lower elevations of the ice sheet. 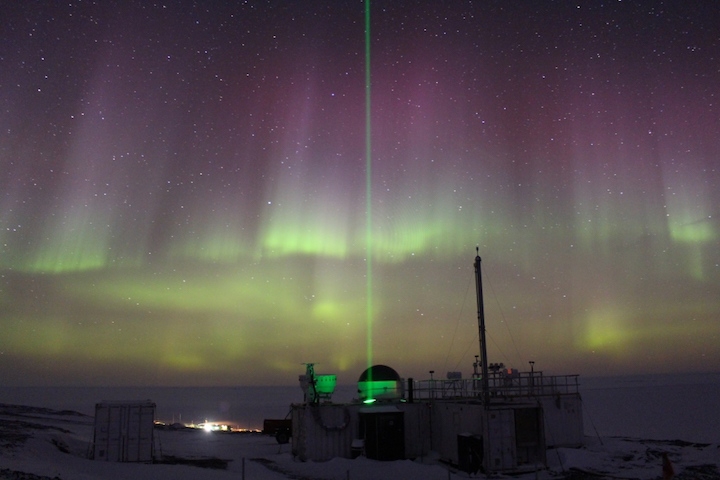 The biggest driver of the Antarctic heat wave was the super El Niño, then at its peak in the tropical Pacific. It helped rearrange the atmosphere so a high pressure system off Chile’s coast could steer abnormally balmy weather toward West Antarctica. The pattern has played out in other El Niño years, causing similar widespread melt events.

Ted Scambos, a researcher at the National Snow and Ice Data Center, said the study did a good job of explaining the mechanisms behind the meltdown and could be helpful in further understanding the forces at play in the region's climate.

The rain that preceded the major melt also may have also played a role in preconditioning the surface melt that Bromwich said was essentially a thick layer of slush covering the ice sheet.

What happened in West Antarctica last January was driven by natural climate shifts, but overlaying it on climate change is bad news for the region where ice shelves are melting from below.

Research has shown that those disappearing ice shelves could trigger “unstoppable” melt as warm water eventually pushes up under parts of the marine ice sheet itself, sending sea levels at least 10 feet higher. Surface melt events like the one Bromwich and his colleagues documented will only compound the speed at which the ice sheet melts.

Previous research has shown that the odds of a super El Niño like the one that boiled the ocean in 2015-16 are likely to double as the climate warms, further compounding the risk. There were also strong winds out of the west that helped blunt some of the melting in January 2016, but if the meteorological odds don’t line up in the future, the region could be in even deeper trouble.

“What this particular event reported in this paper means is that regardless of how strong the westerlies are, we’re likely to get widespread melting,” Bromwich said. “And if they’re weak, we’ll get extreme melting.”

You May Also Like:
It’s June. California Is Still Covered in Snow
Sharp Uptick in Wildfires Strains Great Plains Agencies
May Continues a Ridiculous Warm Streak for the Planet
The U.S. Hit a Wind and Solar Power Milestone in March