Typhoon Wipha is accelerating northeastward toward Japan and is likely to bring strong winds, heavy rain, and high waves to the Japanese coast later on Tuesday (Wednesday in Japan Standard Time). It is expected to affect the coast from Tokyo northward, including at the ailing Fukushima Daiichi nuclear plant 130 miles northeast of Tokyo.

As of Tuesday morning eastern time, Wipha was a minimal but large typhoon with 85 mph sustained winds, located about 400 miles south-southwest of Yokosuka, Japan, and moving northeastward at close to 30 mph. (A typhoon is the same meteorological phenomenon as a hurricane, but these storms are named differently in different ocean basins.)

Current forecasts show Wipha making landfall, or coming close to making landfall, about 20 miles east of Tokyo late Tuesday or Wednesday, while transitioning from a weakening tropical cyclone into a strengthening hybrid storm, with characteristics of both a tropical storm and an extratropical system. Satellite analysis from the U.S. Navy's Joint Typhoon Warning Center (JTWC) showed this transition is already underway, as the storm’s once tightly-wound center begins to widen. This may not be good news for Tokyo and Fukushima, though, since this process can cause storms to intensify and expand in size, resulting in a broader wind field and a higher potential for storm surge.

“Steady weakening is expected during the forecast period due to increasing vertical wind shear and passage over cooler water,” the JTWC said in a statement. However, the statement also said the storm is likely to “transition into a very strong extratropical low.” The impacts from this hybrid storm in Japan may be similar to the impacts from a category 1 typhoon.

This storm could bring an expanded area of high winds and pounding surf to heavily populated areas of Japan, and to the vulnerable nuclear plant that was incapacitated by the massive earthquake and tsunami in 2011. A storm surge advisory is in effect for Fukushima, with water levels already reflecting the incoming storm.

The tsunami generated by the earthquake led to a series of engineering failures, culminating in a triple nuclear meltdown at the plant, in the worst accident at a nuclear power plant since Chernobyl in 1986.

The JTWC reported maximum wave heights of 33 feet associated with Wipha, and some computer model projections show the potential for 40 foot waves off the coast of Japan on Tuesday into Wednesday as the storm transitions into a powerful extratropical storm system, with maximum sustained winds close to hurricane force, or 74 mph, along the coast. 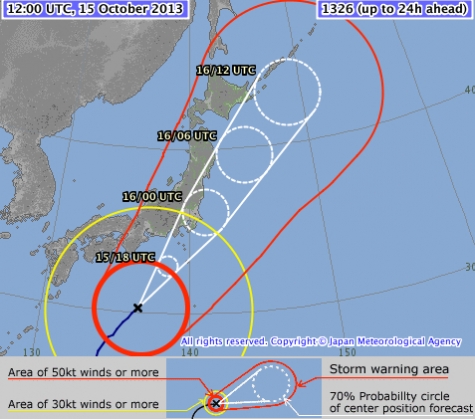 The current track forecast would avert a worst-case scenario that would take Wipha over the coast just west of Tokyo, which would push a storm surge into parts of the city, and result in a higher surge near the Fukushima area. Given that the storm is still several hundred miles south of Japan, the exact track is still uncertain, and the impacts would be more severe if the storm were to track about 40-50 miles west of the current forecast track.

The Japanese Meteorological Agency (JMA) is projecting that the Tokyo Prefecture, which includes the city of Tokyo, home to 35 million people, has a nearly 100 percent chance of seeing sustained winds of at least 58 mph during this event, while Fukushima Prefecture has between an 80 to 95 percent chance, with the highest probability right along the coast.

As the storm tracks along the east coast of Japan it is likely to produce heavy rain and possibly even some mountain snows from Tokyo northward to the island of Hokkaido.

“Deep convection on the westward flank of the storm…  plus the topography of Japan means heavy rain for the coastline regardless of the Typhoon's track,” said Ryan Maue, a meteorologist at WeatherBell Analytics, a weather forecasting firm. “The deep tropical moisture should remain enough to cause huge flood potential” for the Fukushima area, he said.

Even in the absence of landfalling typhoons, cleanup work at Fukushima has hit several serious roadblocks, with recent discoveries that the plant has been leaking radioactive water into the Pacific Ocean. A team of 16 experts from the International Atomic Energy Agency (IAEA) is currently in Japan to visit the plant and advise the government on how to deal with the challenge of storing large amounts of radioactive material on site.

In September, the Japanese government announced it would spend half a billion dollars on additional steps to secure the plant, including building a wall to block the contamination of groundwater. A major storm with high surf, strong winds, and heavy rainfall likely would complicate cleanup efforts, or possibly pose an even greater danger to the facility.

The operator of the plant, Tokyo Electric Power Corp (Tepco), canceled all offshore work in preparation for the storm, while continuing work onshore to contain radioactive leaks. Reuters reported that Tepco plans to pump out rainwater into “protective containers at the base of some 1,000 tanks storing radioactive water” before testing it for radioactivity, and assuming harmful levels are not found, releasing it into the sea. As the Wall Street Journal reported, the biggest danger is not the possibility of more leaks of radioactive water, but rather damage to temporary storage tanks or equipment that could release more highly radioactive material.

Typhoons are no stranger to Japan, although like in parts of the U.S., by the time these storms reach such northern latitudes they are often transitioning into hybrid storm systems. A spokesman for the JMA told Reuters that the storm was a “once in a decade event.”

The most destructive typhoon in modern Japanese history was Super Typhoon Vera, which hit Japan as a category 5 storm in 1959 and caused nearly 5,000 deaths and $1.9 billion in damage (in 2009 dollars), according to a report from Risk Management Solutions.

At one point, Typhoon Wipha was part of a trio of major tropical cyclones from the Western Pacific Ocean to the Bay of Bengal, where Cyclone Phailin made landfall over the weekend. In contrast, the Atlantic hurricane season is cruising to one of its least active years on record, with not a single major hurricane of category three intensity or greater occurring to date. The Atlantic hurricane season officially ends on Nov. 30.