First the rains came. Then the floods. Then the tweets.

In late January 2014, Jakarta was inundated with heavy rain. So much rain fell that the region saw 16 inches more rainfall than normal for the month. 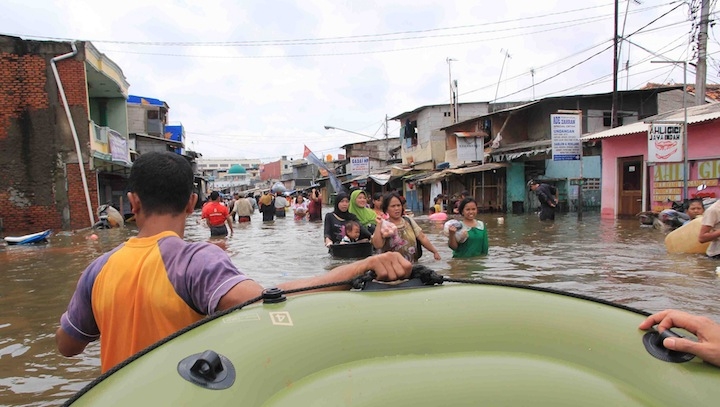 Flooding in Jakarta.
Credit: East Asia and the Pacific/flickr

Rivers rose and punctured their banks, spilling onto the streets of the Indonesian capital. Flood waters reached over 6 feet in some areas and affected nearly 135,000 residents. Those with smartphones and a Twitter account rushed to relay information about the extreme rise of waters to family, friends and follower alike.

The tweets made for compelling retweets and news reports, but Dutch researchers have also figured out another use for the tweets: real-time flood maps. Their efforts are currently being piloted in Jakarta, but they could eventually change the way that disaster response agencies,  like the Red Cross, address weather disasters globally. And in a warming world where heavy downpours are likely to increase (as are the number of social media users), the project represents a sweet spot that addresses a need with a growing source of data.

“There are a lot of people tweeting about locations of floods, and they often describe the water level in their tweets,” Arnejan van Loenen, a flood expert at Netherlands-based research institute Deltares, said. “That gave me the idea that well, if there’s this amount of information, then each tweet could be seen as an observation. That was a lot of observations about floods that are not being used.”

The project, called Floodtags, uses an algorithm and spam filter to find tweets about floods and identify clusters of tweets about a certain location — usually a strong sign of something major happening. Van Loenen and his colleagues are then able to translate the ephemera of Twitter into detailed flood maps that pinpoint flood levels and hard-hit areas. The project doesn’t currently analyze image data in tweets, but van Loenen said that could eventually become another rich source of information for their tool.

The technique is particularly useful in cities or locations that have a lot of active Twitter users. During the January 2014 floods, more than 360,000 tweets were posted about the floods, including 15,000 with flood depth information. For a major event like Hurricane Sandy, more than 20 million tweets were posted over a five-day period, providing an even bigger bounty of data (and of course, a lot of noise).

But unlike New York and other areas on the Eastern Seaboard, Jakarta and other urban areas across the developing world have fewer weather stations and data (though many are home to some of Twitter’s 302 monthly million users). That means the tool could be a major boon for disaster responders in developing countries. After the waters recede, the data can help assess damage and recreate a timeline of flooding for future planning.

“The Red Cross already uses Twitter; the Philippines Red Cross monitors it; the American Red Cross monitors it,” Erin Coughlan, a senior climate specialist with the Red Cross Red Crescent Climate Centre, said. “Floodtags has this approach that uses an algorithm that allows people to tackle the big data problem — there are so many tweets — and make it useful and helpful for us.”

Van Loenen said it’s unlikely to completely replace tools already at disaster responders’ disposal, including satellite images and good old-fashioned phone calls. But he said it’s possible that as the project expands to include other countries, they could also tap into other social networks such as Instagram, which boasts 300 million monthly users, and Weibo, a Chinese social media platform with nearly 200 million monthly users.

Floodtags isn’t the only application of the millions of pieces of data people inadvertently generate everyday on social networks.

“At this moment, there is a lot of potential for projects (like this),” van Loenen said. “For example, like famine alert systems that focus on words like cholera, or other epidemics, or even earthquake response systems. It’s all in the first development phase.”