President Trump on Friday called for the review of a five-year plan for offshore oil and gas leasing that the Obama administration put in place to keep large swaths of the Atlantic and Arctic off-limits to fossil fuel development.

Trump signed an executive order calling for the review during a ceremony at the White House. It comes just before the symbolic 100-day mark of his administration and instructs the Commerce Department to also review all marine sanctuaries created or expanded in the past 10 years. The order echoes another signed earlier this week for a review of all large national monuments established since 1996 and recommending ways for Congress to shrink or abolish them. 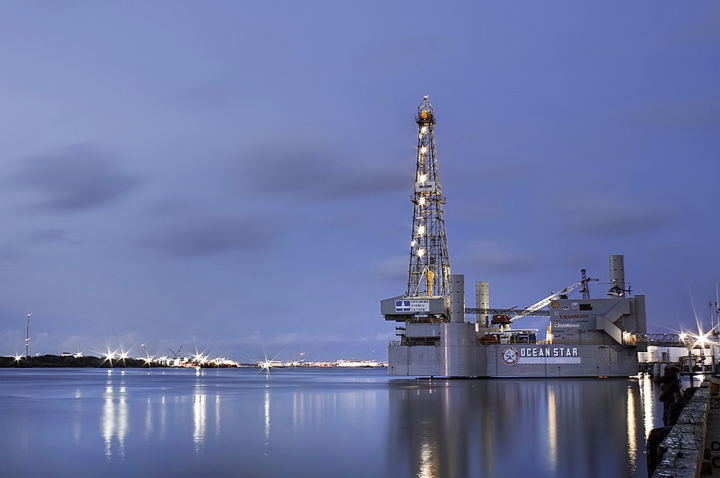 The latest order is part of a concerted effort to roll back Obama-era environmental regulations — such as the Clean Power Plan and a moratorium on federal coal leasing — put in place in part to curb the greenhouse gases emitted by the burning of fossil fuels. Those emissions are raising global temperatures and sea levels, as well as impacting weather patterns and the health of ecosystems.

Trump and officials in his administration, many of whom have connections to the oil and gas industry, have decried those regulations as “job killing” and preventing economic growth. They have also cited them as a threat to national security. Trump promised during his campaign to roll them back and bolster America’s declining coal industry as well as fully exploit the country’s fossil fuel reserves.

“This executive order starts the process of opening offshore areas to job-creating, energy exploration,” Trump said in remarks before the signing. “It reverses the previous administration’s Arctic leasing ban and directs Secretary Zinke to allow responsible development of offshore areas that will bring revenue to our treasury and jobs to our workers.”

Zinke is charged with carrying out the review of the current five-year offshore leasing plan over the next couple of years. In the meantime, that plan “remains in existence; there is no immediate change,” Zinke said.

President Obama announced the areas under a leasing ban in December in concert with Canada, which also placed its Arctic waters indefinitely off limits to future offshore oil and gas development. Obama used a 1953 law called the Outer Continental Shelf Lands Act to protect the areas under the ban.

At the time, Trump vowed to undo as many of the restrictions placed on oil and gas development as possible once he was in office. An executive order he signed in March called for federal agencies to flag any regulations that place an “undue” burden on fossil fuel and nuclear energy development and recommend plans for rescinding them.

Another order signed on Wednesday directed Zinke to review all national monuments of 100,000 acres or larger within 45 days; monument status limits the amount of fossil fuel development and logging that can take place on public lands.

The provision to review marine monuments in the new order is interrelated with that order, Deborah Sivas, a professor of environmental law at Stanford Law School said in an email, as many of these monuments would need to be “rolled back before new leases could be issued lawfully.” 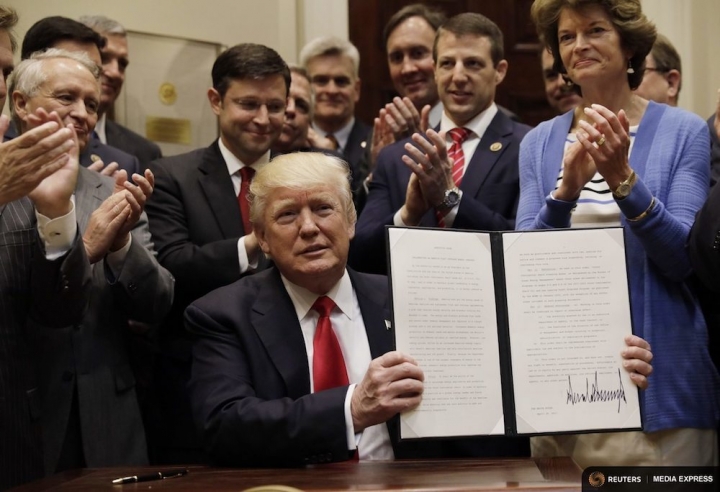 In combination, these orders could make it difficult for the U.S. to meet its obligations under the Paris climate agreement. That pact calls for nations to curtail greenhouse gas emissions in order to keep global temperature rise under 2°C (3.6°F) above pre-industrial levels by the end of the century.

While Trump vowed to pull the U.S. out of the agreement during his campaign, the administration has not yet signaled whether it plans to do so. In an interview Thursday, Trump said a decision on that score would come “in about two weeks.” Some, including Energy Secretary Rick Perry, have advocated staying in the agreement and trying to renegotiate it.

The review of the leasing plan will take time and will have to involve public comment and any changes would likely be subject to legal wrangling, experts said.

“Much of this EO stuff is for show in the short term. But if the administration actually keeps at it, there could be changes a year or two down the line,” Sivas said. “Then, of course, there is no question in my mind that litigation will challenge whatever the outcome.”

“The existing plan has extensive scientific, economic, and other information supporting the federal government's offshore leasing framework,” Jayni Hein, policy director of the Institute for Policy Integrity at NYU School of Law said in an email. The existing plan protecting certain areas is “an imminently sensible choice given the environmental and social risks of leasing in these areas,” she said.

One reason for the ban in Atlantic waters was opposition from local communities; Zinke said that such views would be taken into account in his review.

“I’m going to take in the state and local voices,” whether for or against drilling, he said.

“There’s no set goal” of the review, Zinke added, but if support for drilling exists within local communities and industry and the resources are available, he would include that recommendation in the next five-year plan.

Zinke said that offshore wind energy would also be included in the review and environmental issues, such as concerns for vulnerable marine life, would be taken into account.

You May Also Like:
The Next March Is All About Climate Change
Environmental Rules Played Minor Role in Coal’s Decline
California Got More Snow This Winter Than Past 4 Total
How Trump’s Monuments Review Could Impact Climate