Trump’s Base the Big Winner from Paris Withdrawal

President Trump’s decision to withdraw from the Paris climate agreement provides no clear benefits to American workers or industries. His announcement on Thursday merely hands a symbolic victory to his political base — nationalists who resent internationalism and global cooperation.

During a 28-minute speech announcing that the U.S. — which has released more climate pollution than any other country — “will withdraw from the Paris climate accord,” or try to renegotiate it, Trump said the move would put America first. 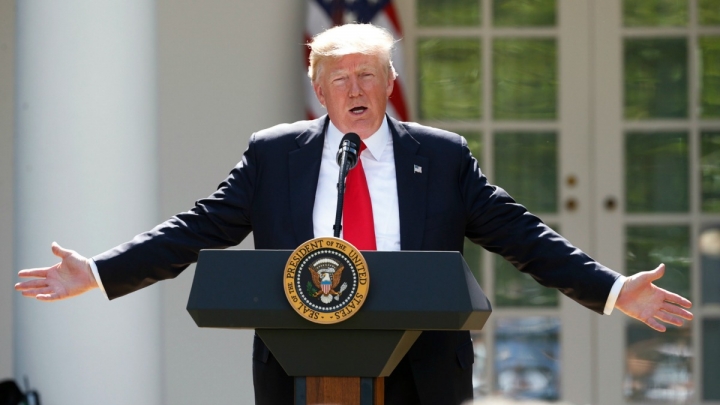 Trump announced he would withdraw the U.S. from the Paris climate agreement on Thursday.
Credit: Kevin Lamarque/Reuters

“The Paris Agreement handicaps the United States economy in order to win praise from the very foreign capitals and global activists that have long sought to gain wealth at our country’s expense,” Trump said. “They don’t put America first. I do, and I always will.”

For a president who cherishes victories but has suffered political and legal setbacks in his attempts to build a border wall and ban Muslims from traveling to the U.S., withdrawing from the Paris agreement offered an easy win, and one that’s unlikely to be hampered by lawmakers or the courts.

“It’s one of the few things that he’s able to do,” said Cary Coglianese, a professor of law and political science at Penn Law. “For Trump supporters it looks like he’s delivering on a campaign promise — it looks like he’s standing up for Americans against the rest of the world.”

Trump announced his intended withdrawal to polite applause amid the pageantry of the White House’s rose garden — fitting pomp given that the announcement was largely symbolic.

Under the terms of the Paris agreement, Trump could not pull the U.S. out of it until around the time of the 2020 election. He needs to provide only one year’s formal notice beforehand. A future president could rejoin.

“A lot of the rhetoric in his speech was us against them,” Coglianese said. “There’s an insularity and a shortsightedness of a segment of the American public that’s unable to see that, actually, America can win when we can have expanded global markets and have leadership on vital issues.”

Trump’s announcement came days after he held meetings abroad that raised tensions with European leaders and longtime allies, prompting German Chancellor Angela Merkel to warn her citizens that “the times in which we could rely fully on others — they are somewhat over.”

After it was reported that Trump was preparing to pull out of the pact, Bette Grande, a researcher at the Heartland Institute, which opposes efforts to protect the climate, said in a supportive statement that “globalism would take a big hit” from the move. “Angela Merkel and what is left of the E.U. are not happy (itself a victory).”

Indeed, condemnation from abroad was swift and united on Thursday, with France, Germany and Italy issuing a joint statement rejecting his bid to renegotiate the pact. The European Union and China plan to issue a joint statement supporting climate action. 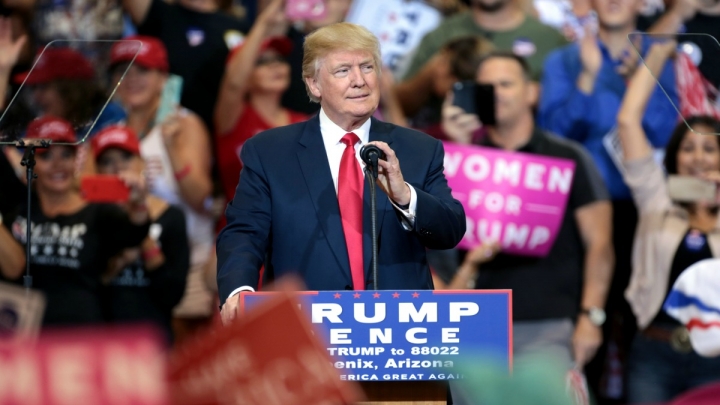 Trump at a campaign rally in Arizona in October.
Credit: Gage Skidmore/Flickr

The backlash was also fierce domestically, with leaders of some of America’s biggest corporations, including Goldman Sachs, Google and Facebook, issuing statements condemning the move. The governors of California, New York and Washington state agreed to form an alliance aimed at meeting the goals of Paris. And Disney’s Robert Iger and Tesla’s Elon Musk quit as White House advisers.

The United Nations agreement was reached in 2015 by nearly 200 nations, each undertaking to tackle warming in their own ways. The pact does not compel the U.S. or any other country to achieve the pledges they made under it.

Robert Stavins, a professor at Harvard who directs the university’s environmental economics program, said there would be “no real winners” from withdrawing from the Paris agreement. But he said “there are winners in the political world — namely the right-wing of the Republican Party, and perhaps the president’s political base.”

Under President Obama, America pledged to reduce its climate impacts by about a quarter by 2025 under the Paris agreement, compared with 2005 levels — a tiny fraction of what’s needed to safely slow global warming. The Trump administration has been moving to eliminate the environmental regulations put in place that would help the country make good on that promise.

While Trump touted his decision on the Paris pact as an attempt to shore up American industry, experts warned it would not have have that effect. Even some large coal companies joined with ExxonMobil and other fossil fuel giants in supporting the historic 2015 agreement.

“The demise of coal as a power source in the U.S. is going to continue regardless of the Paris agreement,” said Ethan Zindler, head of U.S. research at Bloomberg New Energy Finance. Withdrawing from it “will not make a material impact on the plight of American coal workers.”

Trump also said Thursday he would end U.S. payments to the Green Climate Fund, which was set up during U.N. climate negotiations to help poorer countries develop their economies with clean energy and adapt to the effects of global warming.

Fossil fuel pollution and climate change disproportionately hurt the poor — people who live closest to power plants and highways and other source of pollution and who struggle to adapt as seas rise and heat waves, droughts and storms become fiercer.

Alvaro Sanchez, environmental equity director at the Greenlining Institute, a policy and research nonprofit working for racial and economic justice, described Trump’s speech as “just another clear indication that this administration really does not think very highly of communities of color.

“He’s trying to appeal to a small set of individuals and corporations that stand to benefit from policies of exclusion, policies that promote fear,” Sanchez said. “It’s a global statement about not caring about the wellbeing of the most vulnerable communities.”

You May Also Like:
The Larsen C Iceberg Is on the Brink of Breaking Off
Waves Rippled Through Greenland’s Ice. That’s Ominous
Bipartisan Bill Introduced to Fix Neighborhood Floods