With more stars in the sky than can easily be counted, Carl Sagan, in his book “Billions and Billions,” wrote about how hard it is to talk about the cosmos without using huge numbers. 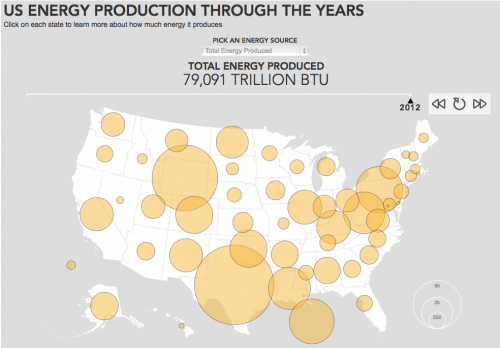 The largest energy producing hotspots in the U.S. as of 2012, part of a new U.S. Department of Energy interactive map showing the growth in energy production across the U.S.
Click image to enlarge: Credit: DOE

Just as the U.S. Energy Information Administration reported that the crude oil production in the U.S. is expected to continue booming even as oil prices decline, the federal government put out an interactive map showing just how production of energy of all kinds has increased over the past 20 years or so, and where those production hotspots are. 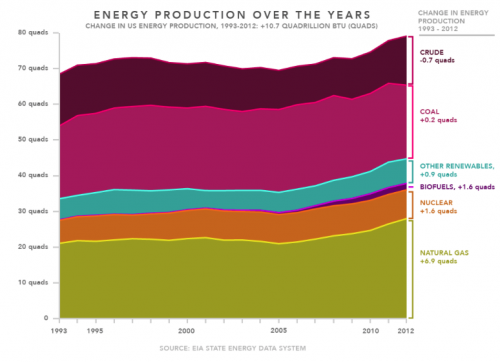 Natural gas, nuclear and biofuels have seen the most production growth in the U.S. since 1993.
Click image to enlarge: Credit: DOE

A few other things stand out on the map.

Wyoming, a major coal producer, can be seen exploding onto the energy production scene as a major natural gas and wind power producer. The map shows how Pennsylvania’s natural gas boom made it a major energy producer over the past five years and North Dakota’s Bakken shale boom made that state a major oil producer at the same time.

Most of all, the map shows that, maybe like night sky and the cosmos beyond, “Quadrillions and Quadrillions” may be an apt title for the story of U.S. energy over the past two decades.