Time for Trees to Pack Their Trunks?

During the last two springs, contract planters for The Nature Conservancy (TNC) have spread out through the pine, spruce and aspen forest of northeastern Minnesota. Wielding steel hoedads, they have planted almost 110,000 tree seedlings on public land. 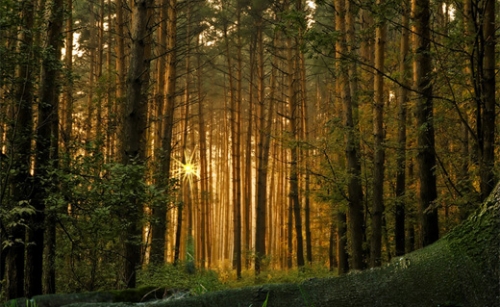 Some scientists and conservationists warn that mixing species will degrade “ecosystem integrity.”
Credit: B. Gilmour/flickr

What’s noteworthy about planting trees in a forest? Usually foresters plant seedlings grown from seeds harvested nearby, on the assumption that local genotypes are best suited to local conditions. But these TNC workers were planting red and bur oak (which are uncommon in northern Minnesota) from seed sources more than 200 miles to the southwest, and white pine from as far away as the Lower Peninsula of Michigan, 400 miles to the southeast.

TNC is anticipating a day soon — within the lifespan of a tree — when a changing climate may make the forest unsuitable for some tree species and varieties that now live there. Projections for northeastern Minnesota predict warmer and possibly drier conditions — bad news for the boreal species such as white spruce, balsam fir and paper birch that have defined the forest here for centuries. But a warmer, drier climate would likely make the area better suited for species such as oaks.

“Our goal is to maintain a forest going forward,” says Meredith Cornett, TNC director of conservation science for Minnesota and the Dakotas. “We run the risk of losing forest cover because we don’t have a suite of species that is resilient to climate change — that they won’t be able to hang in there or keep pace with the rate of climate change.”

TNC is jump-starting the future forest to protect not only the forest, but also the goods the forest provides, such as clean water, wildlife habitat, tourism, logs and pulpwood. “We care about that because our livelihoods up here really depend on that,” says Cornett.

Forest of the Future

TNC isn’t alone. It’s joining an international conversation about lending a helping hand to trees and other plants that are rooted in place in order to populate new, more suitable areas as climate shifts. Strategies include “assisted gene flow,” which refers to moving varieties within a species’ range, and “assisted migration” (also called “managed relocation” or “assisted colonization” to avoid confusion with seasonal migrations), which means moving a species or population to help it expand outside its native range.

Some relocations are already underway. Volunteers have moved the endangered conifer Torreya taxifolia from its native range in Florida to sites in North Carolina.

In some cases, the aim is to save a species with nowhere to go, stranded by elevation or manmade obstacles. In other cases, the concern is less for individual species than for the overall well-being of ecosystems.

“The crux of it is that species are at risk because of climate change,” says Dov Sax, deputy director with the Institute for the Study of Environment and Society at Brown University and member of a scientific group that studied assisted migration.

In some cases, the aim is to save a species with nowhere to go, stranded by elevation or manmade obstacles. In other cases, the concern is less for individual species than for the overall well-being of ecosystems. In northeastern Minnesota, for example, white spruce, paper birch and balsam fir may all but disappear in a warming climate. They will surely exist in profusion farther north. But can other tree species expand northward quickly enough to take their place?

“The only way that range can move is if seed disperses outside of the range,” says Sally Aitken, director of the Centre for Forest Conservation Genetics at the University of British Columbia. Paleoecologists have looked at the range expansion of North American trees as the glaciers retreated 10,000 years ago at the end of the last Ice Age, she says. The fastest that tree species were able to invade the barren ground left behind by the ice was by about 100 to 200 yards per year. But climate is shifting northward up to 4 miles per year, far faster than the ability of tree species to keep up, creating the possibility that forests will become less diverse as some tree species fall out of the mix. The solution: maintaining diversity by intermixing species and varieties more suited to a projected future climate. 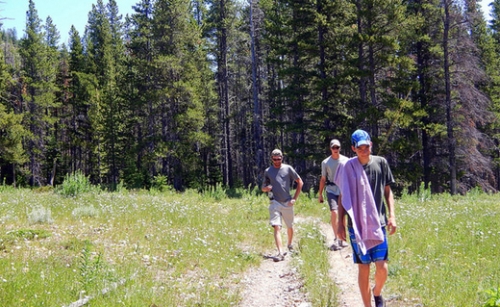 It may sound like a can’t-lose. But in reality, assisted migration of trees is controversial — risky, some scientists say. For example, TNC offered to plant Michigan white pine on state and federal land in northeastern Minnesota, but both the U.S. Forest Service and state Department of Natural Resources declined, so the trees were planted on county land instead. “They are still, and rightly so, taking a conservative approach to moving things around,” says Cornett.

What’s the harm? “The big risk that most people are worried about is that you will move something out of its historic range and it will do better there than you wanted it to,” says Sax. Think carp and kudzu, two species intentionally introduced far outside their native range to become despised invaders.

Another risk, though slight, is that juxtaposing previously isolated varieties will result in production “genetic incompatibilities,” says Aitken, akin to breeding a horse and donkey to produce a sterile mule. Or that, in moving trees because they perform well in a warmer climate, you overlook local adaptations to photoperiod or soils, and so the trees fail to survive or thrive. Says Aitken, “We have to understand the basis of the local adaptation.”

“What we think of as ecosystems are transient, that very few of the associations of species that we see now that make up an ecosystem would have been together at most points in time in the past,” — Dov Sax

Some scientists and conservationists warn that mixing species will degrade “ecosystem integrity.” But as Sax points out, perhaps a fifth of the plant species in North America already hail from somewhere else. And the notion of a “balanced” ecosystem doesn’t have much support in scientific evidence. “What we think of as ecosystems are transient … very few of the associations of species that we see now that make up an ecosystem would have been together at most points in time in the past,” says Sax. “What we get is that maybe communities will be together for a few thousand years.” Novel ecosystems — a hodgepodge of natives and exotics — can function, but how much worse or how much better than native assemblages is still a puzzle. “That’s the kind of thing we don’t have a handle on,” Sax says.

But many scientists see the risks of managed relocation as manageable. “I’m on the end of the spectrum of thinking that if used properly and selectively that it could be one useful tool in the toolbox,” says Sax. “There are going to be circumstances were the projected costs are low, the projected benefits are high, and those are the circumstances we should use it in.”

Aitken’s lab is testing different varieties of several western tree species, including important commercial species such as lodgepole pine and Sitka spruce, but also trees of little commercial value but high ecological value for sequestering carbon or providing wildlife habitat. The lab is examining more than 10 million genetic markers for each species in hundreds of trees to try to predict which trees will do well where, without expensive and time-consuming field trials.

“If we can identify the right materials to plant for future climates, we should be able to increase productivity of forests for economically important species,” says Aitken. Assisted gene flow “may have the ability to accelerate adaptation in the whole population.”

Aitken has also laid the experimental groundwork for assisted migration of whitebark pine. The species is predicted to disappear from its current range within 70 years, yet much of northwestern British Columbia appears suited to the species. To test that, Aitken successfully planted seeds from seven populations of pine in eight locations up to nearly 500 miles north of whitebark pine’s current range.

When it comes to assisted migration to adapt to climate change, caution has generally trumped action.

Otherwise, assisted migration of plants in response to climate is mostly in the talking stage. More work has been done with animals. Scientists from Durham University in Great Britain introduced two butterfly species to new sites up to 40 miles outside their range in northern England. In Australia, land managers have focused more on native birds and mammals than on plants, undertaking some 200 assisted relocations of 42 vertebrate species. Many of these relocations weren’t made in anticipation of climate changes but for more immediate environmental concerns, such as the presence of cats, foxes or other introduced predators. For that reason the captive-bred dibbler, a rodent-like marsupial, was introduced to a predator-free island.

When it comes to assisted migration to adapt to climate change, caution has generally trumped action. “Most places in the world are doing research but they’re very reluctant to move into practice,” says Aitken. “We sold people so well on the ‘local is best’ that it’s a big change to all of a sudden say, ‘Well you might want to get your seed from somewhere else.’”

In Europe “most conservationists … are quite conservative (what’s in a name?) when it comes to introducing or translocating species,” Sebastiaan Van der Veken, director of the natural area Regionaal Landschap Kleine en Grote Nete in Belgium, wrote in an email. “Even reintroduction of recently disappeared species or short-distance translocation is highly discussed. Most scientists in Europe think (or hope) creating robust networks and corridors will make it possible for species to migrate themselves. They even fear that putting assisted migration on the agenda will restrain policy makers from investing in these ecological networks ‘because we can simply move species around when necessary.’”

Meanwhile, as scientists debate, there’s evidence that ambitious gardeners and commercial nurseries are stealing the march.

Commercial plant nurseries are raising, selling and introducing hundreds of native forest plants far beyond their natural ranges — in effect pushing the northern limits of these trees, shrubs and wildflowers on average more than 600 miles, according to a study by Van der Veken. Not surprisingly, however, there is a bias toward pretty, popular and economically valuable species. “So it would be wrong to rely on these nurseries and gardeners alone to solve the biodiversity problem induced by climate change,” Van der Veken wrote. “Scientists have an important role in making a framework for assisted migration, including screening of endangered species, translocation risk analysis and post-migration monitoring.”

Both Aitken and Sax caution that more research is needed.

Other scientists concur that the willy-nilly experimentation in the garden or backyard is unsuited to remaking something as long-lived and self-sustaining as a native forest.

Forests have to live for a long time,” says Aitken. “If you lose your lettuce in the garden one year, it’s not the end of the world. But if you’ve got a 30-year-old forest and all the trees die from an unseasonable event, you’ve lost a lot of years of growing. I think it’s fair that we’re more cautious with our native forests than we are with our gardens.”

Both Aitken and Sax caution that more research is needed. Assisted migration “is the sort of thing we should be using a few decades from now, once we’ve had the opportunity to fill in some key research gaps,” says Sax. Among those gaps: understanding which species are at risk from climate change and which aren’t, and how well novel assemblages of species perform environmental tasks, such as cleaning water.

“From my point of view, simply starting to engage in these conversations, starting to educate the public, starting to fill these research gaps — these are all the things that need to happen first,” Sax says. “I’m actually pleased with how things are progressing.”