Africa’s Most Vulnerable Face an Even Hotter Future

Already home to some of the most environmentally vulnerable populations on the planet, Africa looks to increasingly feel the sting of climate change through more frequent, widespread and intense heat waves.

Extreme heat that would be considered unusual today could become a yearly occurrence there by mid-century, one new study suggests, and the trend will emerge earlier there — and in the rest of the tropics — before it does in more temperate areas, another finds. 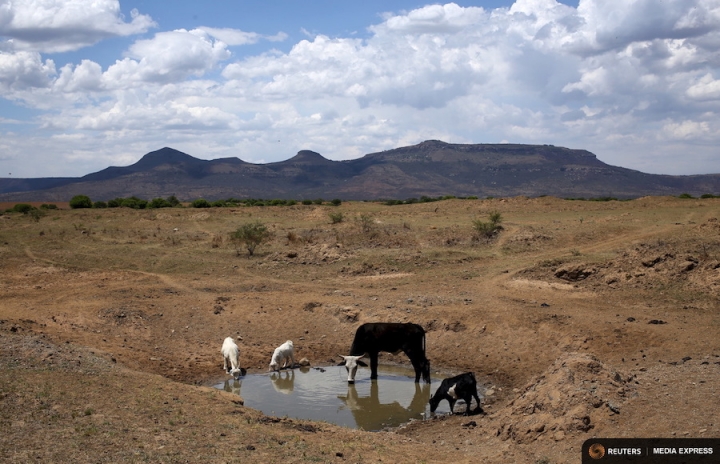 Livestock drink from a drying river outside Utrecht, a small town in the northwest of KwaZulu-Natal, on Nov. 8, 2015.
Click image to enlarge. Credit: REUTERS/Siphiwe Sibeko

The studies, both detailed this month in the journal Environmental Research Letters, emphasize the undue burden that some of the poorest populations on the planet — often those that have contributed least to global warming — will face from climate change, the authors say.

“They don’t have the capacity to respond to such heat waves,” lacking the kind of warning systems and regular access to health care that help those in wealthier countries cope, said Jana Sillman, a co-author of the first study, and a climate researcher at the Center for International Climate and Environmental Research in Norway.

An increase in extreme heat is one of the clearest implications of the overall warming that has resulted from decades of unabated emissions of carbon dioxide and other heat-trapping greenhouse gases. Warming has been shown to increase the odds of such extreme events already today, and heat waves are expected to become increasingly intense and frequent at all regions across the planet as temperatures continue to rise.

Because the tropics have less variation in their day-to-day and season-to-season temperatures, that means the trend of more extreme heat will emerge sooner and will reach higher heights than in more temperate locations.

Those areas also happen to generally correspond to the regions where the world’s poorest and richest populations live, respectively. The tropics are home to some 4 billion people, the U.N. estimates.

One of the new studies used climate models to link cumulative carbon dioxide emissions to extreme heat occurrence and showed that fewer emissions were needed to see an increase in the number of extremely hot days for the poorest fifth of the world’s population than for the wealthiest fifth. Among the most impacted regions were West Africa and the Horn of Africa.

“Our results show extreme hot days will become more frequent with continuing emissions, and for some tropical regions these increases will become more apparent much more quickly,” lead author Luke Harrington, a PhD candidate at the New Zealand Climate Change Research Institute, said in an email.

The other study used regional climate models to looks specifically at the trends in heat waves in Africa, looking both at events in terms of their severity and their duration.

Even though people living in tropical areas are more adapted to hot temperatures than those in more temperate climes, there is a limit to the human body’s tolerance of heat. The background warming of the planet means that heat waves now and in the future push closer to that limit than they once did, just as a rising tide lifts the height of the waves.

Sillman and her colleagues found that Africa is already seeing heat waves that are more intense, more frequent and that cover a larger area than ever during the last couple decades of the 20th century. And the models suggest that heat waves considered unusually extreme today could become a yearly occurrence by 2040 if greenhouse gas emissions are not curtailed.

By the end of this century, they could happen even more often, particularly in the tropics where there aren’t seasons like temperate areas.

Historical and expected changes in temperature and precipitation across Africa.
Click image to enlarge. Credit: IPCC

“The heat wave is not limited to the summer,” Sillman said.

The impacts to human health from such heat waves could be exacerbated by humidity. Though neither study incorporated this factor, other studies have shown that heat stress (a measure of both temperature and humidity) will increase in much of the tropics, including in places likely to see some of the biggest increases in population.

Many of these areas lack the resources to help people cope with extreme heat — such as reliable access to safe drinking water and cooling centers — and don’t always have the systems in place to warn residents that a heat wave is coming.

Awareness around these issues is increasing, though: A series of deadly heat waves prompted the city of Ahmedabad, India, to work with NGOs to set up a Heat Health Action Plan that includes warnings and reminders of where residents can go to keep cool and hydrated.

Intense heat can also affect the productivity of economies, particularly for work based outdoors like construction and agriculture. A recent U.N. report estimates that 1 billion workers in vulnerable countries are already subject to impacts from extreme heat and that lost work hours could deal a major blow to developing economies.

Heat also affects the crops and livestock that people in many areas rely on for survival — drought and heat have led to severe food shortages in parts of Africa this year.

“The threat to Africa is multi-faceted. Threats to human health via heat waves is but one of them,” Michael Wehner, a climate researcher at Lawrence Berkeley National Laboratory, said. “Disruptions to agriculture, combined with a rapidly growing population in some countries is also of great concern.” Wehner was not involved with either study but has conducted research on heat extremes.

How much Africa and other precarious regions are impacted depends on how the world as a whole decides to respond to the threat of climate change, including whether countries stick to their commitments to the Paris climate agreement. With a certain amount of warming guaranteed, though, adaptation to future conditions will also be necessary.

“Emissions reductions can ameliorate these increasing risks, but even in rather dramatic emission reduction scenarios, the change in heat waves is still very large,” Wehner said.