The Dutch have mastered water for a millennium. Could their new approach save New Orleans?

This is the first installment of a Times-Picayune and Advocate series exploring how the Netherlands’ climate change adaptation strategies could be a model for the Louisiana coast.

The series was produced in collaboration with WWNO New Orleans Public Radio and Climate Central, and is part of the Pulitzer Center’s Connected Coastlines reporting initiative. For more information, go to pulitzercenter.org/connected-coastlines

HOEK VAN HOLLAND, The Netherlands — Up close is not the best way to see the world’s biggest gate.

Viewed from one end, where a three-story hinge links to a massive steel lattice, the Maeslant storm surge barrier resembles three crane towers toppled across one another. From the opposite end, nearly 280 yards away, it’s an imposing white wall, like a drive-in movie screen stretched the length of 2½ football fields.

And that’s only half of it.

Taking in the view from a small hill — one of the highest points in this low-lying region of South Holland — the same enormous structure is repeated on the other side of a Rhine River shipping channel running from the North Sea to Rotterdam, Europe’s largest port.

The two arms of the Maeslant barrier — each the size of the Eiffel Tower — stand ready to swing shut and lock in the middle of the channel when the sea kicks up devastating waves.

That’s happened only twice since the $720 million structure was built 23 years ago. At that time, the barrier was the be-all, end-all of coastal defenses, a master stroke of engineering by a nation that had for more than a millennium sculpted its landscape to push back the sea and hem in its rivers. An old Dutch saying goes: “God created the Earth, but the Dutch created the Netherlands.” 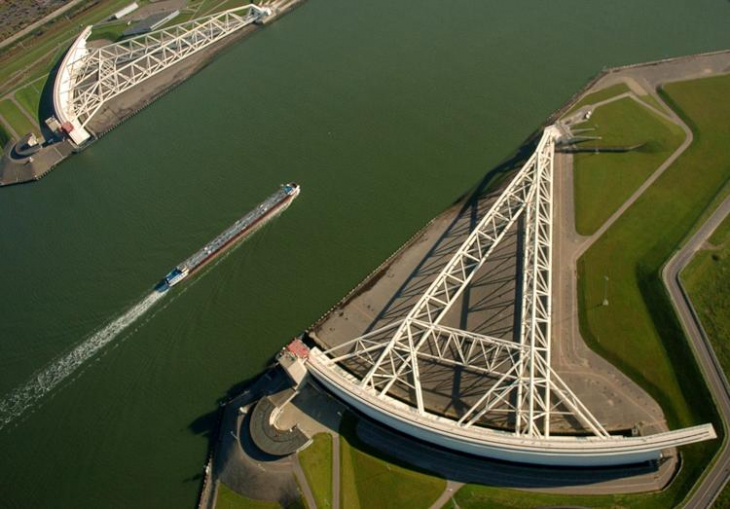 A ship passes the gates of the Maeslant storm surge barrier as it enters the New Waterway from the North Sea. The gates swing closed during storms to protect over a million people in and around Rotterdam during storm surges. MICHAEL DeMOCKER

After Hurricane Katrina overran New Orleans’ levees in 2005, Louisiana came calling. The state’s flood and storm protection managers ogled the Maeslant and closely studied the Netherlands’ well-built, well-maintained system of sea gates and levees, which the Dutch call dikes. Dutch-inspired defenses were subsequently built along the Louisiana coast, but nothing quite on the scale of the Maeslant.

Almost like a child looking up to an older, more experienced sibling, Louisiana continues to seek guidance from the Netherlands.

But the Dutch have a new lesson: Building bigger, better infrastructure won’t be enough to overcome the threats posed by changing climate. Even the mighty Maeslant, the Dutch now concede, stands little chance against the storms, floods and rising seas predicted in the coming decades.

“The Maeslant barrier will be one of the first tipping points we will encounter with climate change,” said Ferdinand Diermanse, a risk analyst at Deltares, a Dutch water research institute. “And it will be one of the bigger ones.”

Designed for a century of infrequent use, the Maeslant may instead be worn out from overuse in just 40 years, according to new predictions by a group of scientists from Deltares and Dutch universities. Engineers designed the barrier with sea level rise in mind, but now the high-end estimates from the mid-1990s — a rise of up to 3 feet by 2100 — have been relegated to the low end by updated predictions.

With polar ice sheets melting faster than expected and carbon pollution rising, a more likely scenario is for sea levels on the Dutch coast to rise between 3 and 6½ feet.

The barrier would likely have to swing shut three times per year if sea levels were to rise 3 feet. Bump the levels up to 5 feet, and the barrier would need to close a whopping 30 times each year, according to a Deltares-led study. 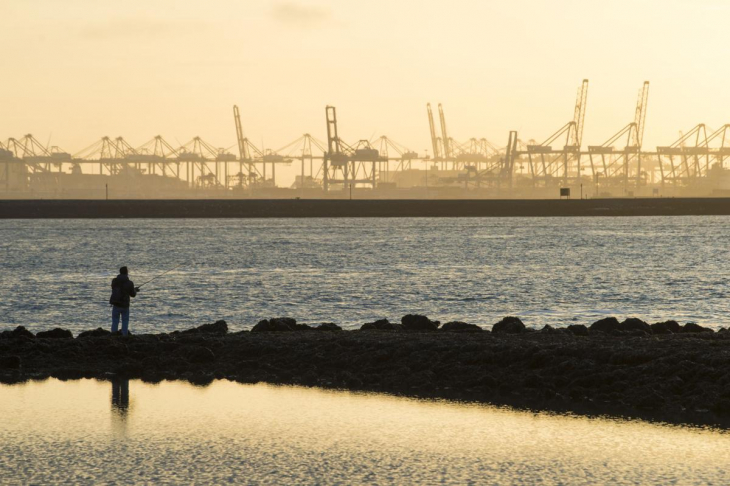 A mix of industry and recreation near the Maeslant storm surge barrier on a channel of the Rhine River in South Holland, Netherlands. STAFF PHOTO BY CHRIS GRANGER

“When the harbor’s closed, that’s a loss of 25 million euros per day,” said Marc Walraven, a storm surge barrier expert with Rijkswaterstaat, the Dutch equivalent of the U.S. Army Corps of Engineers. “We’re protecting not only millions of people but also our busiest port.”

Even as such frequent closures would chip away at the trade-dependent Dutch economy, they would also drive up flood risk behind the Maeslant. The barrier, which sinks to the river bottom when it closes, would block river outflows, putting pressure on upriver levees in Rotterdam and other parts of the densely populated Rhine delta.

Much of the Netherlands’ vaunted network of storm and flood defenses faces similar challenges.

“We can build bigger; that is not a problem,” said Hans Brouwer, a Rijkswaterstaat flooding expert. “But when you do, you accommodate a higher level of water.”

Behind the bigger barriers and higher water, the land continues to sink, a process called subsidence that’s also happening across much of south Louisiana. “When it goes wrong, the damage will increase,” Brouwer said. “Wouldn’t it be better to lower water levels by giving land back to the river?” 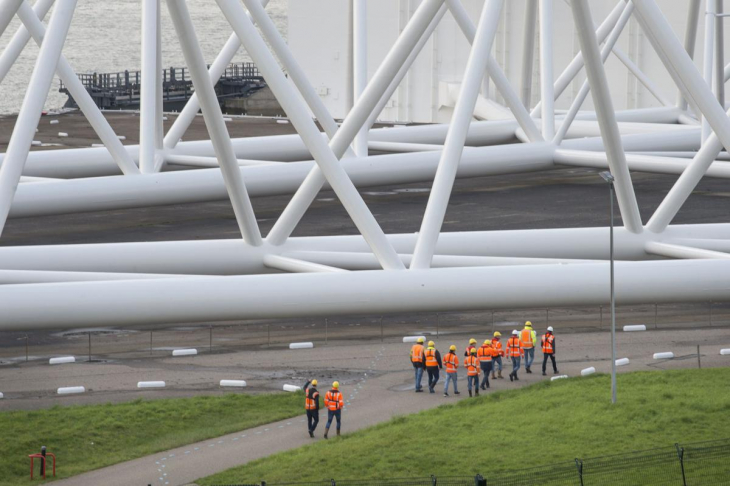 Officials with the Maeslant storm surge barrier on the New Waterway in South Holland, Netherlands. STAFF PHOTO BY CHRIS GRANGER

As climate change accelerates, the Dutch are making a tactical retreat. They’re pulling back levees, removing buildings and giving rivers room to flood safely. In cities, they’re embracing rainfall and the certainty it will come harder and heavier in the years to come.

Rather than lean on overworked pumps, the Dutch are turning urban spaces into sponges. A growing number of planted “green” roofs and dual-purpose public water plazas hold and slow the rain, giving stormwater systems time to catch up.

Nature has been enlisted as an ally. Along the coast, the Dutch are using the wind and waves to spread the millions of tons of sand that serve as the first line of defense against sea level rise and storm surges. Similar work on the Louisiana coast, which relies more on machine power, moves much less sand at a far greater cost.

“Climate change is asking for different solutions,” said Bianca Nijhof, director of the Netherlands Water Partnership. “And that's why we started looking at nature and how it adapts. After 3.8 billion years of evolution ... it probably has things tweaked to perfection.” 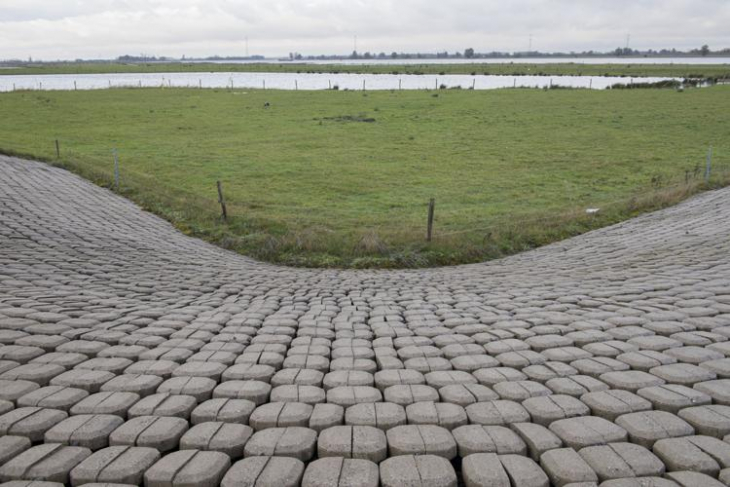 Vibrant growth can be seen in the fresh alluvial soil in the expanded Noordwaard flood plain. STAFF PHOTO BY CHRIS GRANGER

The Dutch aren’t giving up on their levees and storm gates, but they’re taking a more nature-based approach with them. Coastal levees, they’ve found, don’t need to be so tall if they're built behind a surge-absorbing cushion of trees. Aiming for a balance between protection and restoration, the Dutch have begun amending their structures, allowing fish to pass and dying wetlands to revive.

Louisiana also faces an existential threat from climate change and sea level rise. Hurricanes are hitting the Gulf Coast with more intensity. Harder, heavier rains now dump more water into New Orleans than the city’s drainage system can handle. The Mississippi and other rivers are swelling from downpours in the Midwest, recently sparking fears that levees between Baton Rouge and New Orleans could be overtopped.

Much like the Maeslant, the Bonnet Carre Spillway was supposed to be a tool of last resort, deployed in emergencies to protect New Orleans from Mississippi River flooding. But it’s been opened three times over the past two years and has stayed open for months at a time. Before 2018, it had been opened just 11 times in its 80-year history.

The Dutch say they have plenty of lessons for Louisiana, but the Bayou State has been slow to catch on.

Piet Dircke, reflected in a bus window, is an Arcadis water management expert. He leads a tour of the Noordwaard Room for the River project area for Louisiana, Texas, and Florida officials in November 2019. STAFF PHOTO BY CHRIS GRANGER

With support from the Pulitzer Center’s national Connected Coastlines initiative, The Times-Picayune | The Advocate and WWNO New Orleans Public Radio sent two reporters and a photographer to the Netherlands to better understand how the Dutch are reshaping their strategies to grapple with sea level rise and climate change.

The group spent two weeks touring flood and storm protection projects, visiting cities and coastal towns, and talking with scientists, business and policy leaders, and everyday people who are living the new lessons. Many Dutch are eager to share their hard-earned knowledge.

“If we see other countries just raising their dikes all the time, we can show them — not just tell them — that that doesn’t work,” Nijhof said. “We say, 'Maybe you should be smarter. Think about climate change coming up … and learn from what we did here.' ”