By now, we’ve all heard that 2016 was the hottest year on record, and that heat-trapping greenhouse gases hit their highest concentration ever, surpassing 400 parts per million for the first time in nearly 1 million years. 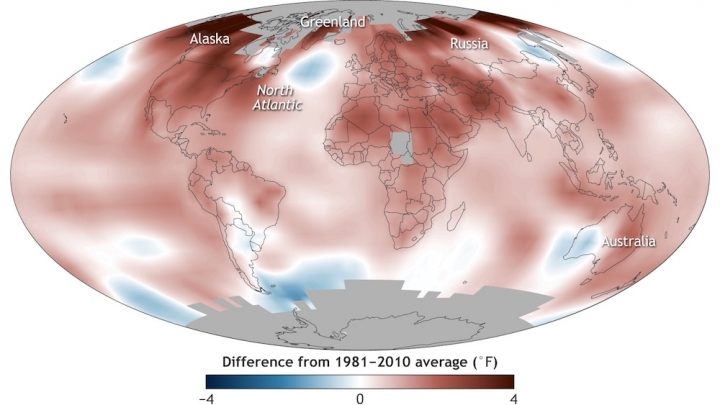 But there are other climate change-related records that have flown more under the radar. Several of those records were highlighted Thursday in the annual State of the Climate report, released in the Bulletin of the American Meteorological Society:

For example, during August, ice-free areas of the Barents Sea (north of Norway and Russia) were up to 20°F (11°C) above average, a figure that stunned climate scientists.

The Chukchi Sea off Alaska and the waters to the west of Greenland were 13°F to 14°F above average. Those warm waters were linked to the smallest annual winter peak in sea ice levels and the second lowest annual minimum.

The average land surface temperature for the Arctic was 3.6°F (2.0°C) above the 1981-2010 average — a 6.3°F (3.5°C) rise in temperatures since 1900. Record-high temperatures were measured below the surface of the permafrost, or permanently frozen ground, across the North Slope of Alaska. 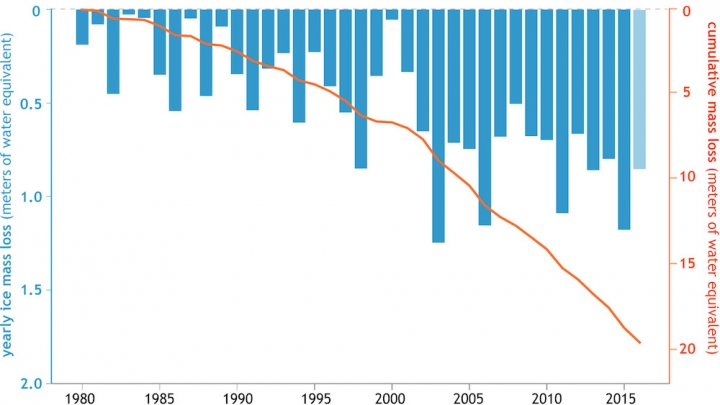 Glacier mass balance — the difference between ice lost through melting and ice gained through new snowfall — each year since 1980 (blue bars) for the 44 glaciers in the World Glacier Monitoring Service's reference network. The orange lines shows the running total ice mass loss between 1980–2015. These glaciers have lost the equivalent of cutting a 70-foot thick slice off the top of the average glacier.
Click image to enlarge. Credit: NOAA

“2016 was a year in the Arctic like we’ve never seen before,” Jeremy Mathis, director of the National Oceanic and Atmospheric Administration’s Arctic research program and an author of the report, said.

The rate of warming in the Arctic, which is happening at twice the rate of the rest of the globe, has major impacts on local ecosystems, but also further drives the warming of the planet, as the sea ice that would reflect the sun’s rays back to space is lost.

And for the 37th consecutive year, alpine glaciers retreated across the globe. These glaciers are a major source of water for local communities, and their loss has led to concerns about water security, particularly in places like Southeast Asia.

Global sea level was also the highest on record — and sea surface temperatures globally were also record-high — with a sea level 3.25 inches higher than they were in 1993, the beginning of the record. The year marked six consecutive years of global sea levels being higher than the year before. Over the long term, sea level rise is driven by the warming of the oceans (as water expands as it heats up) and the addition of water from melting polar ice.

On a more local level, the year, which was the second hottest on record for the U.S., was the 20th consecutive warmer-than-normal year for the country — a mark of the impact that long-term warming is having.

You May Also Like:
Court Scuttles Rule Cutting Potent Greenhouse Gas
July Was Record Hot for Parts of Alaska and the West
Climate Change Has Influenced Timing of Europe’s Floods