What a difference four years makes.

The U.S. is in the middle of a huge oil and natural gas boom, with crude oil production heading skyward fast thanks to a drilling rush in two states — Texas and North Dakota.

Newly released Energy Information Administration data show just how fast that rise is occurring and why: Thanks to hydraulic fracturing drilling technology opening up vast deposits of crude beneath North Dakota and Texas, those states are almost solely responsible for the meteoric rise in oil production in the U.S. since 2010. 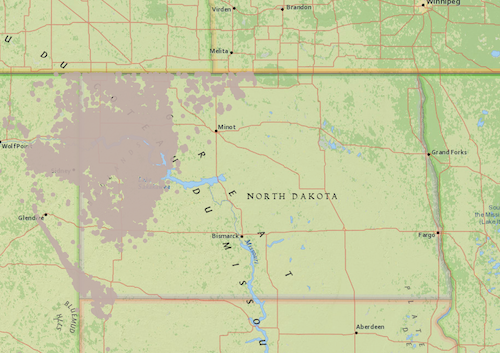 Each gray dot represents an oil well or a group of oil wells to illustrate the crude oil boom that is happening in the Bakken shale region of North Dakota surrounding the city of Williston.
Credit: EIA

And that means greenhouse gas emissions in those states are spiking, too, with little sign of slowing. That’s happening even as the Obama administration has rolled out major proposals to slash emissions related to two of the other major sources of greenhouse gases in the U.S. — coal-fired power plants and landfills.

In the first 2 years of the shale oil boom in Texas, greenhouse gas emissions from petroleum and natural gas systems there nearly doubled, to nearly 27.8 million metric tons in 2012 from 14.6 million metric tons of CO2 in 2010, U.S. Environmental Protection Agency emissions estimates show. Data for 2013 and 2014 are not yet available.

North Dakota also saw an increase in oil-related greenhouse gas emissions, rising to 1.76 million in 2012 from 1.2 million metric tons in 2010, according to the EPA.

When the Texas and North Dakota crude oil frenzy started heating up in 2010, the U.S. produced just less than 5.5 million barrels of crude nationwide each day. Those two states were responsible for producing 26 percent of that oil, and the rest came from all other oil-producing states, the EIA data show.

Since 2010, oil production in all the other states has remained roughly flat and by 2014, U.S. oil production has spiked to 8.4 million barrels of oil per day — 48 percent of which come from North Dakota and Texas.

The story behind the oil boom in Texas and North Dakota is that hydraulic fracturing and directional drilling in those states have opened up huge deposits of crude oil in shale formations whose names are becoming well-known nationwide, especially the Bakken shale in North Dakota.

The Bakken is slated to be connected to the Keystone XL Pipeline. And, trains carrying crude oil produced there have raised safety concerns across the country because that oil is more volatile than oil produced elsewhere because of its high gas content. 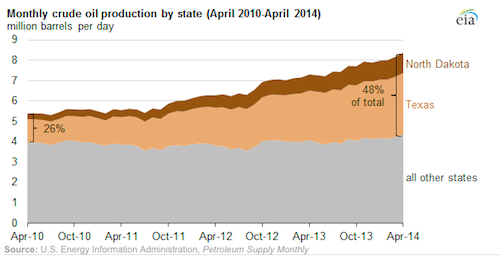 In South Texas, the Eagle Ford shale is turning San Antonio into a bit of a boomtown, while the Midland area, long a crude oil production hub, has been booming again because of fracking in the Permian Basin.

That boom is projected to endure, at least for the next few years.

“We should expect to see continued growth in Texas and North Dakota crude oil production through 2016,” EIA analyst Mike Ford said, adding that eventually, the average annual rate of growth is likely to diminish.

Unless the oil reserves in those states run dry in the coming years or other factors dictate a slowdown, the EIA is projecting that total U.S. crude oil production will rise to more than 9 billion barrels of oil per day in 2019 and hit 13 billion barrels by 2036.

And much of that is expected to come from — wait for it — North Dakota and Texas.

You May Also Like
4 GIFs Show If Tropical Storm Arthur Will Ruin Your July 4
First Tropical Storm Looms, As Does a Wet July 4th
New CO2 Milestone: 3 Months Above 400 PPM
Map Shows When Summer Heat Peaks in Your Town