The Philippines is in line for a direct hit from the strongest storm on Earth this year. Super Typhoon Haiyan will be the fifth typhoon to hit the country this year, but its powerful winds, soaking rains, and a potent storm surge could make it the most dangerous yet.

Extremely warm waters in the western tropical Pacific helped fuel Haiyan’s growth. Surface water temperatures over the past few months have been around 2-3°F above average. Wind shear, which can tear apart tropical storms, is also very low.

Those factors have helped Haiyan explode from a typhoon to a super typhoon in 24 hours. A super typhoon is the equivalent of a Category 4 or 5 hurricane. As of late Wednesday morning, satellite estimates showed Haiyan’s sustained winds topping out at 185 mph. That would make it the strongest storm to form this year, surpassing Super Typhoon Usagi, which struck China in September and attained top wind speeds of 162 mph.

Satellite animation of Supertyphoon Haiyan, also known as Yolanda in the Philippines, as it moves westward on November 6.
Credit: NOAA

Haiyan isn’t expected to weaken much before making landfall in the central Philippines, where the storm is known as Yolanda, on Friday morning local time. Thirteen areas around the country are currently under a low level storm warning, but higher warnings and the number of areas are expected to increase as the storm nears. The Joint Typhoon Warning Center forecasts that the storm will make landfall on the southeast coast of Samar Island with sustained winds of 155 mph and gusts up to 189 mph and then move west and slightly north across the island nation. In Manila, which sits well to the northwest of the forecasted landfall, winds could still reach 64 mph according to estimates from the National Oceanic and Atmospheric Administration.

Heavy rain might be a bigger concern than winds, though. That’s because a tropical depression passed over the country earlier this week and left behind saturated soils according to Weather Underground’s Jeff Masters. Haiyan could drop as much as 16 inches of rain. With little ability to absorb the rainfall, many areas will have increased risk of landslides and flooding. 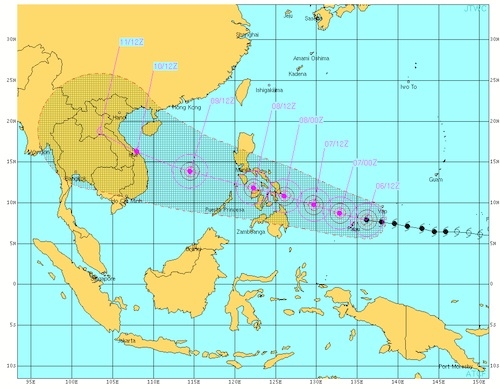 Haiyan will pass very close to Cebu Island, which was near the epicenter of the 7.2 magnitude quake that shook the region in mid-October. Between 8-16 inches of rain are expected to fall there and could hamper recovery efforts.

The other threat from the super typhoon is storm surge. Ormoc City, a city of 191,000 that is roughly 100 miles from where the storm is likely to make landfall, is forecast to see a peak storm surge of 16.5 feet according to Mahar Lagmay, a disaster researcher at the University of the Philippines.

After passing over the Philippines, Haiyan's winds will likely die down but heavy rain is still a threat to Vietnam and other parts of Southeast Asia.

When all is said and done, Haiyan could be one of the most damaging storms in Philippines history. The dubious distinction of costliest storm was claimed by Typhoon Trami, which hit the country this August and caused an estimated $2.2 billion damage, mostly around the Manila region. Typhoons Nari and Utor as well as Tropical Storm Rumbia have also caused havoc in the disaster-weary region this year.

Haiyan is the fourth Category 5 cyclone to form in the western Pacific this year and the fifth across all ocean basins. That’s the most since 2009 according to Masters, but well below the record of 12 Category 5 storms set in 1997, a particularly strong El Niño year.

Overall, 2013 is still a down year for tropical cyclones by at least one measure. Accumulated Cyclone Energy, a measure that incorporates the number of storms formed, their strength and longevity, is 72 percent of what would be expected to date. A big part of that is due to the Atlantic basin, which has had one of the quietest seasons on record.