Super-Typhoon Usagi became the strongest storm on Earth on Thursday. Though it’s weakened since then, the storm is still churning toward Hong Kong and could create major disruptions with a likely landfall as early as Sunday.

On Thursday, Usagi measured sustained wind speeds of 160 mph. Those winds made it the strongest storm on Earth this year, besting Utor, which recorded wind speeds of 150 mph prior to making landfall in the Philippines in mid-August according to the Capital Weather Gang. NASA created a 3D satellite image of Usagi at its peak, showing an extremely well-developed eyewall.

Measurements by the Joint Typhoon Warning Center on Friday morning showed that Usagi had sustained winds of 150 mph with gusts up to 184 mph. That’s still enough to classify it as a supertyphoon or make it the equivalent of a Category 4 hurricane. The storm is also kicking up waves as high as 45 feet.

The storm is expected to deliver a sharp blow to Taiwan on Friday and Saturday before likely heading toward Hong Kong. Taiwan’s Central Weather Bureau has issued an “extremely torrential rain advisory” for the southeastern part of island. The storm could potentially drop 20-30 inches of rain on Taiwan over the next two days. That’s prompted the Defense Ministry to deploy more than 1,600 soldiers to areas most prone to landslides and flooding according to AFP. 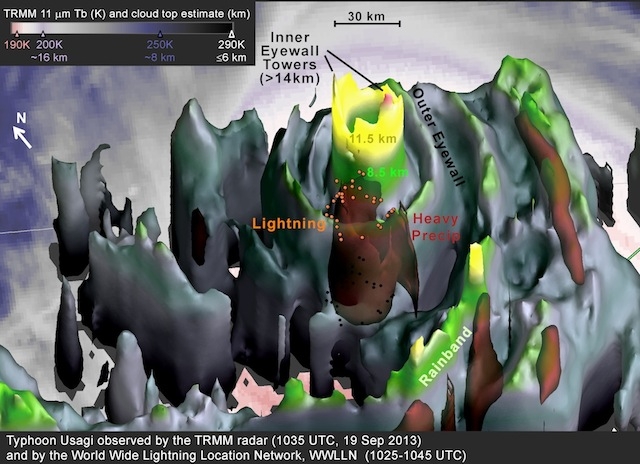 A 3D image of Super-Typhoon Usagi on Sept. 19 shows heavy rain (red) at the base of the eyewall. The lightning flashes (ring of small orange dots) are displayed at 5 km altitude. That's near the freezing level in tropical cyclones and near the top of the heavy precipitation. Credit: NASA/Owen Kelley

The Philippines could catch a glancing blow. Coastal villages have been evacuated ahead of the storm according to the Guardian. Utor struck the island chain last month, dropping 7.5 inches of rain.

Usagi will weaken further as it moves west, but most forecasts have it making landfall very close to Hong Kong by Sunday. Winds will likely be closer to 100 mph at that point, but the threat of torrential rain is still likely. The timing of landfall couldn't be worse. The storm is poised to make landfall during a mid-Autumn festival, which has been likened to a hurricane hitting the U.S. over Thanksgiving weekend. That could cause travel delays that ripple beyond areas immediately impacted by the storm.

Coastal flooding could be a concern in Hong Kong, which is home to roughly 7 million people. While its unknown at this point what magnitude of flooding the storm might cause, the Capital Weather Gang speculated a direct hit on Hong Kong could bring heavy rain and potentially devestating storm surge.

A recent study on flooding of the world’s largest coastal cities found that Hong Kong has $60.7 billion sitting at or below the 100-year flood level. Sea levels have risen in Hong Kong’s Victoria Harbor by a little more than an inch per decade since 1954. That same study noted that if nothing is done to improve Hong Kong’s flood defense, coastal flooding could put $140 billion at-risk if sea levels rise by 15.8 inches.