The globally agreed upon political goal of limiting global warming to 3.6°F (2°C) above preindustrial levels would bring “potentially disastrous impacts,” and a far more ambitious plan to slash emissions of global warming gases is needed, according to a new study by an interdisciplinary group of scientists and economists.

The study, published Tuesday in PLOS One, amounts to a rebuttal of a key finding from a recent U.N. climate report, that laid out a cumulative “carbon budget” for the world to follow in order to have at least a 66 percent chance of meeting the 3.6°F target. 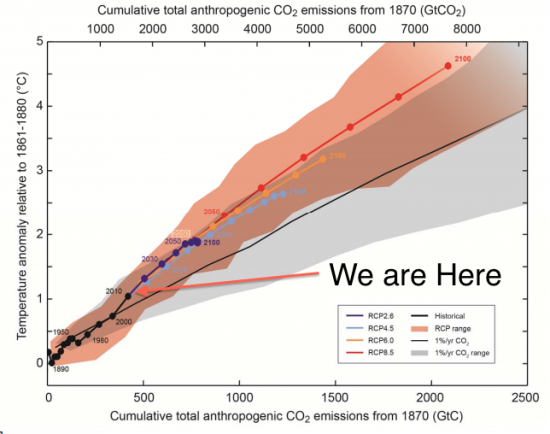 Global mean surface temperature increase as a function of cumulative total global CO2 emissions from various lines of evidence. All values are given relative to the 1861−1880 base period. Decadal averages are connected by straight lines.
Click image to enlarge. Credit: IPCC Working Group I.

The researchers, led by James Hansen, formerly the head of NASA’s Goddard Institute for Space Studies and now at Columbia’s Earth Institute, proposed a far more stringent carbon budget compared to the U.N. Intergovernmental Panel on Climate Change (IPCC), and it would require a rapid — and some would say politically infeasible — decarbonization of the global economy in order to achieve it.

The study argues that more aggressive emissions cuts are needed because the consequences of global climate change are already approaching dangerous levels, from sea level rise to accelerating the rate of species extinction to yielding more frequent and severe extreme weather events, such as heat waves and heavy rainstorms.

The IPCC found that in order to have at least a 66 percent chance of limiting global warming to, or below, 3.6°F above pre-industrial levels, no more than 1 trillion tonnes of carbon (as CO2) can be released into the atmosphere from the beginning of the industrial era through the end of this century.

The new study found that a cumulative industrial-era limit of 500 billion tonnes of carbon would be necessary to safeguard the climate system for today’s young people and future generations.

The study said that burning known fossil fuel reserves, including coal, oil, and natural gas, would easily put the world over the carbon budget, with global average temperatures soaring past the IPCC’s target, let alone the more ambitious path the study proposed.

“It seems that we’re just charging ahead, finding and burning as much fossil fuels as we can possibly find,” Hansen said in a discussion with reporters at Columbia University on Tuesday. “There seems to be no real effort to get off that business-as-usual path.”

The study found that a 3.6°F warming target, which many experts already consider to be extremely ambitious given recent emissions trends and the slow progress in international climate diplomacy, would actually commit the globe to much more warming over the longer term, as various slow-moving feedbacks in the climate system kick in, such as the buildup of deep ocean heat content.

The study recommended that fossil fuel emissions should decline by 6 percent per year starting immediately. That rate, along with reforestation efforts that would help to soak up some atmospheric carbon, would lead to an atmospheric concentration of carbon dioxide — the main long-lived greenhouse gas — of 350 parts per million (ppm) by the end of this century. The study put forward a scenario in which cumulative CO2 emissions are held to 500 billion tonnes of carbon, half of the IPCC target.

“There is no practical justification for why emissions necessarily must even approach 1,000 gigatonnes of carbon,” the study said. 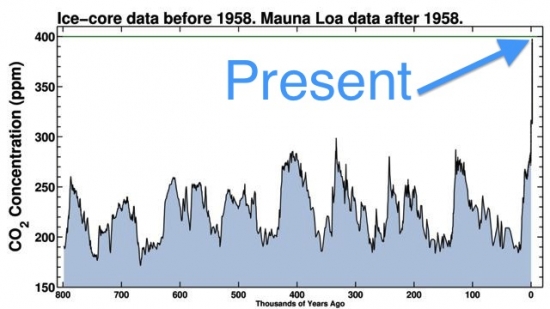 Jeffrey Sachs, an economist, study co-author, and the director of the Earth Institute, told reporters that the world is currently on course for at least a 6°F increase in global average temperatures by the end of the century, a scenario he called “completely reckless.”

“This paper makes extremely clear what the costs of the current trajectory are,” Sachs said.

According to Sachs, a key part of the problem is that researchers and governments have not clearly articulated a roadmap to a low-carbon future, instead focusing on short-term emissions reduction goals or controversial policy tools, like a carbon tax. “I don’t think we have shown the path to decarbonization clearly enough,” Sachs said. Without a long-term, detailed vision, domestic and international climate policies have foundered.

This year, CO2 levels briefly hit 400 ppm — the highest they’ve been in recorded human history — and are expected to climb as high as 450 ppm by the middle of this century if emissions continue on their current course.

The study found that delaying emissions cuts by just a few years, with a peak in 2020, as contemplated under some of the IPCC’s scenarios, would have significant consequences. A delay in emissions cuts to 2030 would keep CO2 above 350 ppm until well after the year 2500.

“If we go another decade or two just charging ahead business as usual, then we leave people a possibly unsolvable problem,” Hansen said.

Hansen said the study bolsters the legal case behind efforts to try to force the U.S. government and state governments to take more aggressive steps to reduce emissions, on the grounds that global warming pollution is harming a public trust and infringing upon “intergenerational equity.”

“Continuation of high fossil fuel emissions, given current knowledge of the consequences, would be an act of extraordinary witting intergenerational injustice,” the study said.

Hansen is well-known for his climate activism in recent years, and consistent with this, the study includes policy recommendations and comments on societal implications of the findings. The more philosophical aspects of the paper caused it to be rejected by one scientific journal, Hansen said.

“It doesn’t shy away from saying what are the policy implications of this? If that makes it political then it’s political,” he said.